A DEVELOPER has applied for planning permission to build an eight storey block of flats in a car park in Hove.

Stonegate Homes is planning to build 39 apartments on the north-east corner of a site on Davigdor Road that also includes P&H House, the former offices of grocery wholesaler Palmer and Harvey.

Stonegate previously applied for permission to build a six-story block containing 43 apartments on the same site.

However, the company, based in Dorking, Surrey, appealed after Brighton and Hove City Council failed to rule on the application within the statutory time limit.

The council previously granted permission for the developer to convert P&H House into 78 apartments. 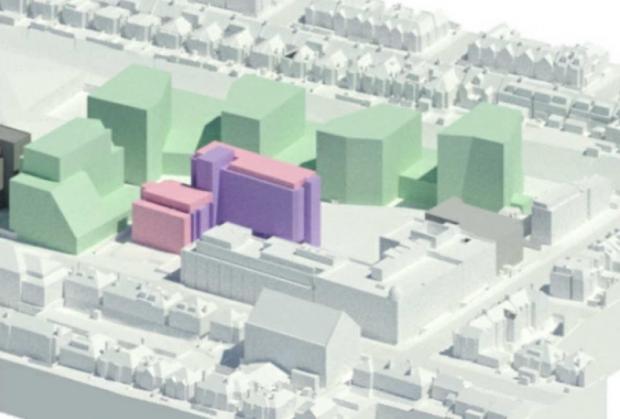 The council had previously approved the plans

The latest plans, which include space for shops or offices on the ground floor, are due to be presented to councilors next week.

Planning officials are backing the £14.5million scheme – and a report to the council’s planning committee says other tall buildings at nearby sites have been approved.

Neighbors sent four letters objecting to the project, calling it an over-development of the site that would “dominate the streetscape.”

One objector, whose details were redacted by the council, said: “The proposed design is poor and the level of development is unreasonable and overbearing in relation to Montefiore Hospital and Preece House.

“The increased traffic and the entry and exit from the site are a major safety problem.

“Several developments are under construction in the area and this proposed development would have an unacceptable adverse impact on residential amenities and a reduction in views.”

The Brighton and Hove Conservation Advisory Group has asked the council to reject the project because of the impact on two listed buildings.

The plans would harm the establishment of Montefiore Hospital and the Coptic Orthodox Church of St Mary and St Abraam, formerly St Thomas, the group said.

Stonegate Homes said: “The location and proportionality of the building has been carefully considered in relation to the surrounding buildings and provides an attractive complement that is coherent in use with the broader site development.

“The design process has been rigorously and carefully considered, with a range of designs being tested to create a suitable solution that respects the existing built form and delivers a high quality scheme that is not visually obtrusive.”

If the plans are approved, 10 of the 39 homes would need to be classified as “affordable” homes – seven for rent and three for communal use.

Palmer and Harvey was one of the largest employers in town

The report to the planning committee instead calls for a “pendulum sum,” which would mean Stonegate bears the cost of building affordable housing elsewhere through the council.

The site has been vacant since Palmer and Harvey collapsed with £700million in debt in 2018 after being put into administration in 2017. More than 400 people lost their jobs.

The Planning Committee meets next Wednesday at 2pm in Hove Town Hall. The meeting will be webcast on the Council’s website.

https://www.theargus.co.uk/news/20878423.block-flats-built-davigdor-road-hove/?ref=rss A block of flats could be built on Davigdor Road in Hove

Application for conversion of houses in Old Shoreham Road, Hove