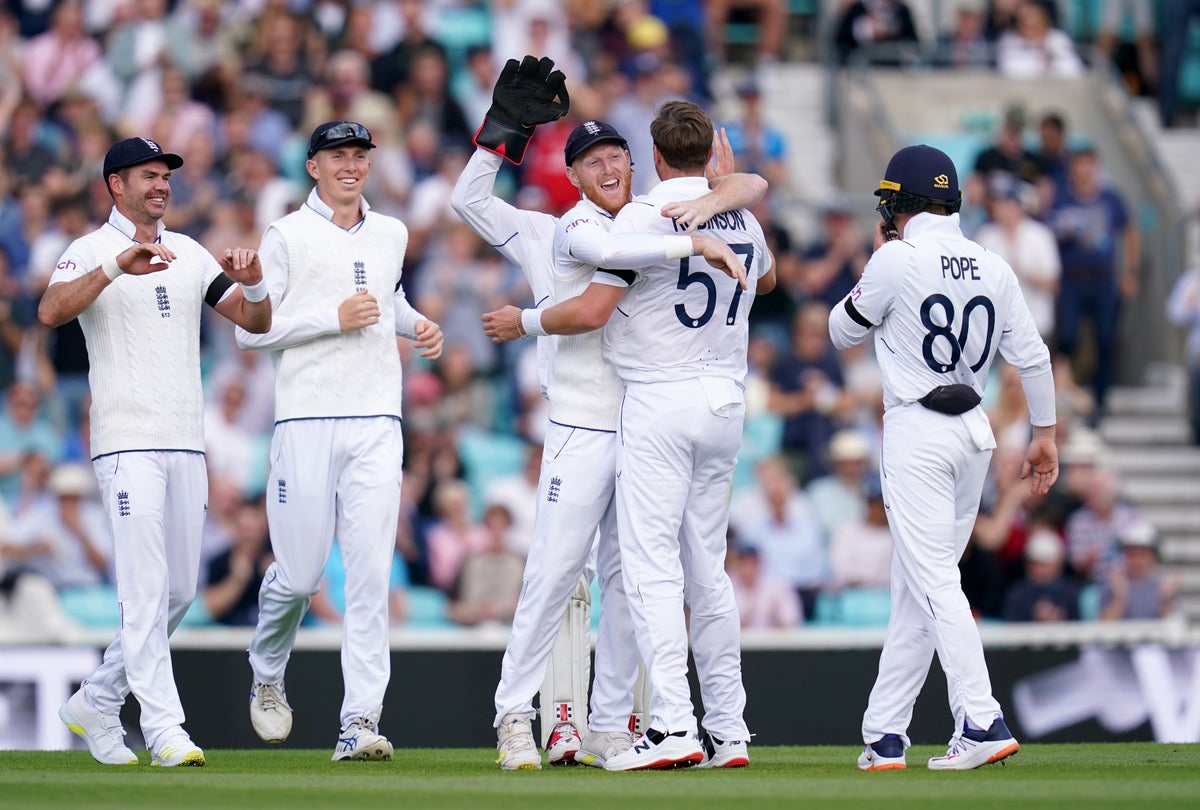 Ollie Robinson and Ollie Pope put England in a useful position in the third Test after an exceptional, wicket-laden third day of sharpness at the Kia Oval.

After stirring tributes in memory of the Queen before the game, Robinson used just enough movement to post a Test-best five for 49, leaving South Africa for a meager 118 in just 36.2 overs.

Wickets also fell in England’s response as they pressed the accelerator, although Pope’s scintillating 67-of-77 balls with 13 fours ushered the hosts to 154 for seven before poor light ended the day prematurely.

Marco Jansen scored South Africa’s best innings goals at 30 – one of only two tour players to reach 20 – ahead of their 4:34 deficit against England, and with the Proteas only 36 behind they remain solid in the race.

Here’s to you, Mr. Robinson

It’s been a tumultuous past few months for Robinson, with well-publicized fitness and injury issues threatening to overshadow the bright start to his Test career. At least in the field, he continues to thrive. Although he lacks speed, his accuracy is impeccable and has left a number of South African sluggers in between. Only New Zealander Kyle Jamieson has a Test bowling average lower than Robinson’s 19.79 among active international cricketers, with at least 2,000 deliveries bowled.

While Robinson grabbed the headlines with an exemplary performance in admittedly helpful conditions, England were also grateful for Stuart Broad’s four for 41 – putting the experienced 563-wicket fast bowler alongside Australia great Glenn McGrath. Only longtime teammate James Anderson is ahead of the pair for most Test wickets from a fast bowler with 665 casualties in 175 Tests.

Tests, which extended to a fifth day this summer, have typically been free for fans, with counties that have taken that approach receiving rave reviews. While Surrey will deviate from strategy, they have announced that all proceeds from day five ticket sales – assuming it doesn’t end on Sunday – will be donated to charity and shared equally between Chance to Shine, Lambeth Food Bank Trust and Sport United Against dementia and the Surrey Cricket Foundation.

View from the dressing room

Robinson admitted England had let South Africa off the hook after a great start.

England will look to increase their advantage and how big their advantage will be in the first innings is likely to fall on Ben Foakes’ shoulders, who is unbeaten overnight at 11 and is the last recognized batter left. However, given Saturday’s fast-paced events, it wouldn’t be a complete surprise if the test didn’t even extend to a third day.

https://www.independent.co.uk/sport/cricket/england-ollie-robinson-london-ollie-pope-surrey-cricket-b2164575.html Advantage England after a gripping day of action in south London