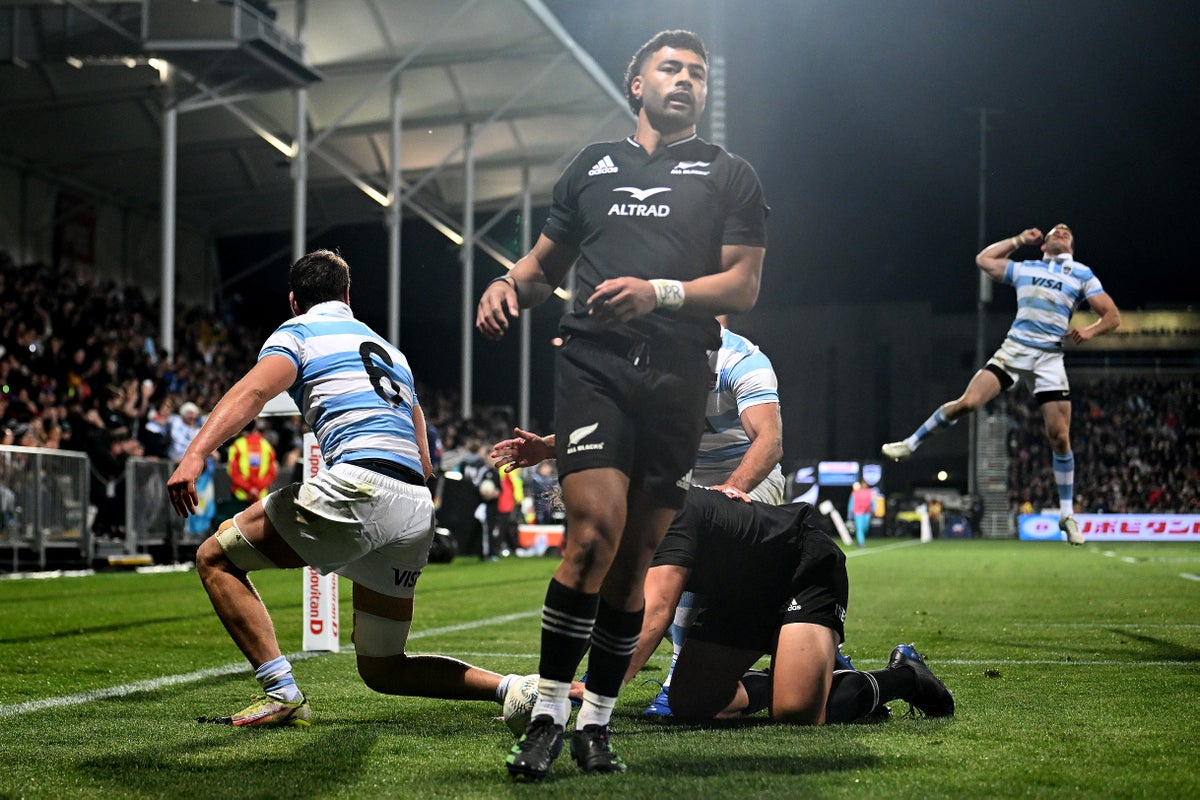 Argentina defeated the All Blacks for the first time on New Zealand soil in a 25-18 win in a rugby championship test in Christchurch on Saturday.

The Pumas scored their first win over New Zealand in another rugby championship game in Sydney two years ago.

Follow all the reactions to the test between the All Blacks and the Pumas on our live blog below.

Julian Montoya celebrates a historic victory for his team

“First of all, thank you to all the Argentinian fans who came here to visit us or woke up at 4.30am in Argentina,” says the talismanic skipper. “Today I’m really proud of our team – we worked very hard for it. We have to enjoy it but we have another game in seven days. I am very proud, very happy, there are many emotions.

“This is a very special moment for us.”

Remarkable. An exceptional win for Argentina, a defensive masterclass.

Sam Cane has some immediate thoughts on the All Blacks loss: “In the first half in particular, I felt like we were more dominant in some areas than we could show on the scoreboard. A lot of credit has to be given to Argentina – they stuck with it and eventually turned the tables. They were good enough to take the win tonight. They are probably one of the better defensive teams in the world. We couldn’t convert to points.

“It definitely felt like there wasn’t a lot of rhythm or flow in the game, a lot of stop start but footy is always difficult. We will travel to Hamilton tomorrow and try again. We have to be better than tonight.”

YOU DID IT! The scrum is a grotesque thing, bodies everywhere, but the ball is in Pablo Matera’s giant right paw and safely gone before the All Blacks can mount a proper challenge, and Argentina get their number eight as it carries around the corner. A slow jerk, a joyful bang on the stands – History for Argentina!

THE LINEOUT IS NOT STRAIGHT! Codie Taylor’s shot drifts to Scott Barrett’s outside hand and Argentina is 60 seconds from victory.

The visitors are almost there. A solid scrum may be all that is required. Stephen Perofeta is making his debut for the All Blacks, perhaps just in time for last rites.

Close-in carrier. Ardie Savea first, Akira Ioane second, a powerful double strike but unable to make significant meters. Jordie Barrett almost does, cutting back and going wild, but he’s shortened. An All Blacks clearer comes in from the side – back for the penalty.

A minute and a half left when New Zealand shoots in the corner. The wondrous Julian Montoya says goodbye for good – Santiago Socino onwards to try it out…

New Zealand is starting to knock on the robust Argentine door again. Will Jordan arrives quickly and is picked up. Just a penalty but a bit more leeway for the All Blacks as Nika Amashukeli invites them to continue with the advantage.

More lineout Woe to New Zealand and the ball is back in Argentina hands! A timely hand from Guido Petti to steal it.

Julian Montoya is still strong in the middle of Argentina’s front row. He spent a little time off the field in the first half to have a head wound treated but it was a remarkable, tireless effort from the skipper.

A crucial All Blacks scrum! Eduardo Bello has to concede against the Argentine tighthead and the penalty goes to New Zealand.

Still, the intensity of Argentina is unbelievable, so you can certainly smell a famous victory. Ardie Savea collects from the rebound and is hit back, Marcos Kremer delivers a drubbing.

Another series of buffets and New Zealand knocking!

Sussex’s Ollie Robinson has been recalled by England

Emma Raducanu is eliminated in the first round in Toronto