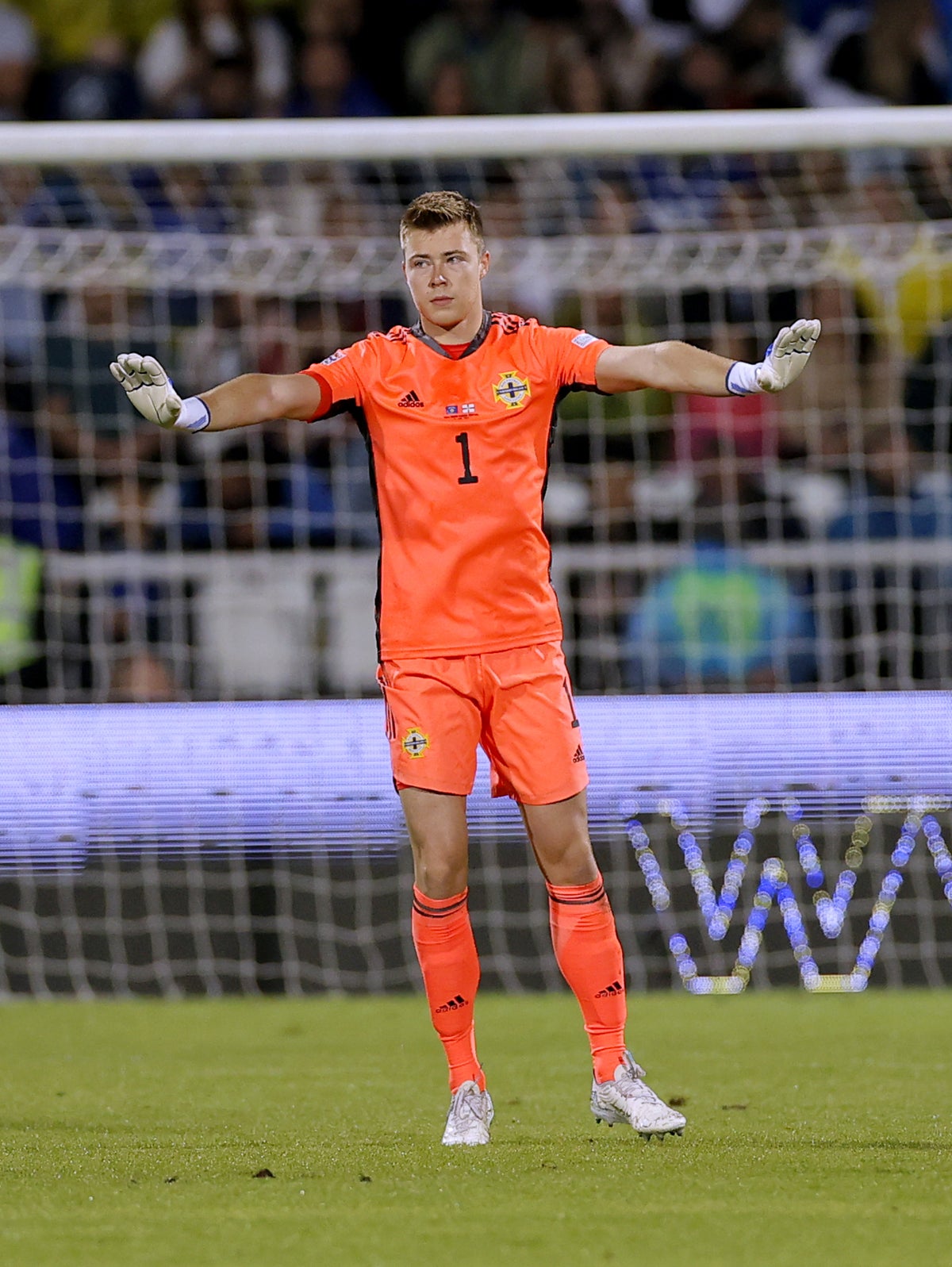 Bailey Peacock-Farrell took much of the credit for Northern Ireland’s decisive 2-1 win over Kosovo on Saturday but still overheard coach Ian Baraclough suggesting he might leave Burnley this winter to retain his place in the side.

But Magennis’ injury-time header would have been meaningless were it not for some crucial saves from Peacock-Farrell – who denied Vedat Muriqi his second of the evening just before Whyte’s 82nd-minute equaliser.

“You don’t always get the glory, but I think there was such a short time between the save and the goal that I could sneak in there and get some credit,” Peacock-Farrell said.

The 25-year-old then prevented Zymer Bytyqi from putting Kosovo back in front after making a string of saves in the first half.

“My memory is terrible right after the game, but certainly there were two key moments in the second half, we could have gone 2-0 down,” he said when asked about a busy evening.

“Making that save at 1-0 and then breaking the lads quickly was incredible, scoring that goal in 30 seconds or whatever it was, perfect.”

Peacock-Farrell has been Northern Ireland’s number one since Michael O’Neill’s debut in 2018 and has not let them down in 34 appearances so far, but he came into this international window with his questionable place as the only goalkeeper in the squad, who doesn’t get regular playing time at club level.

Conor Hazard is on loan from Celtic to Finnish club HJK while Luke Southwood is on loan at Cheltenham from Reading.

Peacock-Farrell spent last season at Sheffield Wednesday but is now back at Burnley, playing as a substitute for Aro Muric – the man who was in goal for Kosovo at Windsor Park.

“We talked about that,” Baraclough said after praising Peacock-Farrell’s performance.

“I spoke to Conor Hazard and Luke Southwood. Bailey was the only one not playing. He knows he’s going to have competition, so obviously he’s keeping in shape. If the next (international) window is March, he has six months to join the team or move on in January.”

Peacock-Farrell said on Northern Ireland’s matchday program he had received offers over the summer but was told by new Burnley manager Vincent Kompany he was wanted at Turf Moor.

“There were a few clubs here and there that were interested in loaning me but after discussions with Burnley it was clear I would stay there this season,” he said.

“It was a bit up in the air with the manager change and stuff like that and with a lot of players coming in and out, they wanted me to stay and when they want that, that happens and I like to do that and fight for it my place.”

The win eased the pressure that had been building on Baraclough, who is hoping the result can be a turning point.

“Every win means something, but a win in the Nations League, the first we’ve managed, makes me very happy,” he said.

“It gives us a platform to build on. We know we’re not the finished product, but we’re still building and trying to attract young players. These players form a squad, a competitive squad and we need to continue to build on that.”

Zoe Holohan's Diary: The upcoming Greek trial over wildfires has prompted some disturbing dreams and flashbacks