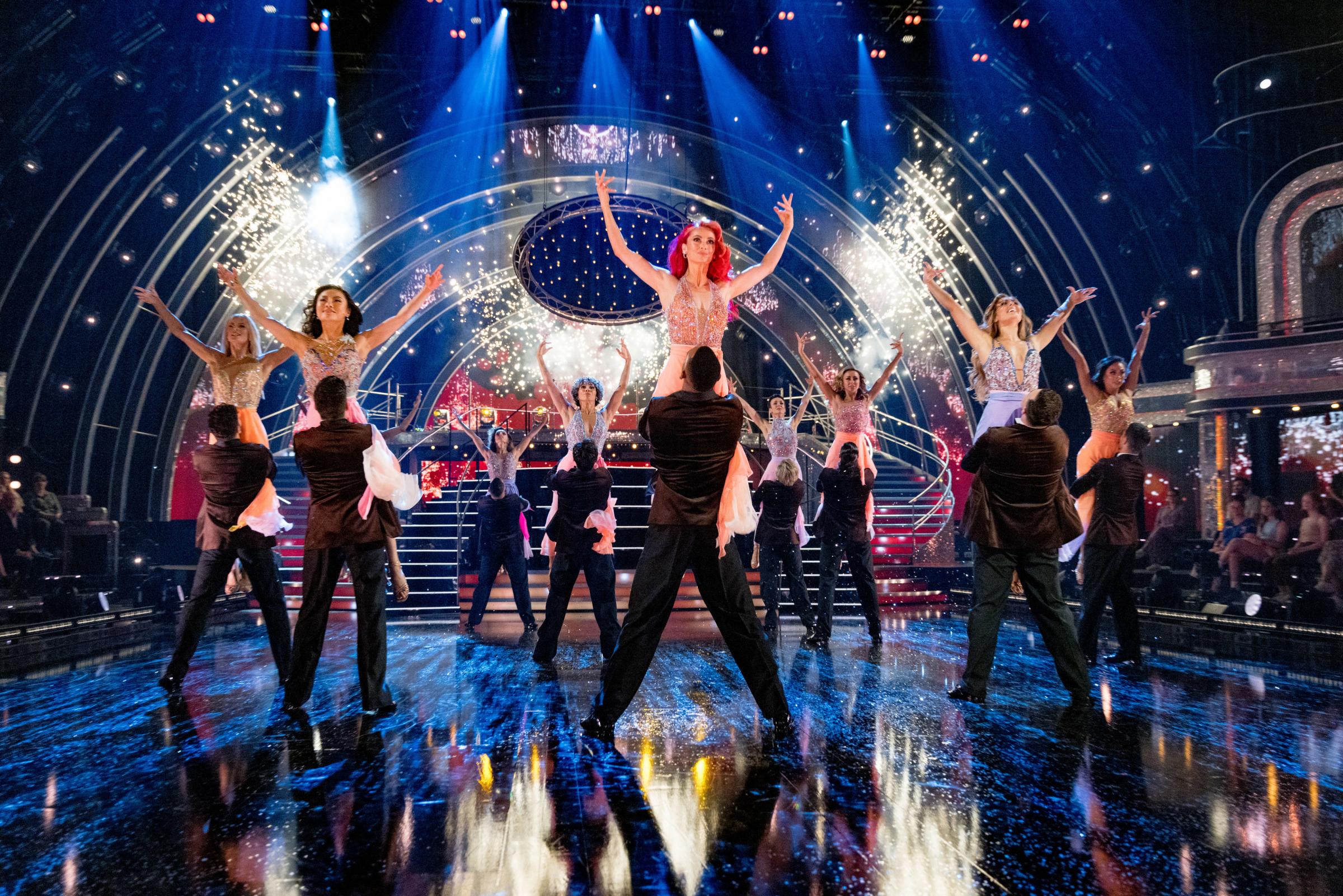 The hit BBC dancing contest returned on Friday for its official launch show after its start date was postponed following the Queen’s death.

Friday night’s programme saw this year’s famous faces paired up with their professional partners ahead of their first dance routines.

Here’s who is coupled up with who and what they will be dancing in their first routines.

Who is Will Mellor partnered with on Strictly Come Dancing?

Ready to work on that #Strictly face, it’s epic partnership Will and Nancy 🥳@Mellor76 @Nancy_xuxi pic.twitter.com/jXfSIRM4Mp

Actor Will Mellor has been partnered up with Strictly pro Nancy Xu.

The 46-year-old, best known for playing Gaz in Noughties sitcom Two Pints Of Lager And A Packet Of Crisps, said ahead of the launch: “I’m honestly so chuffed to be taking part in Strictly Come Dancing this year!

“Not going to lie, it’s totally out of my comfort zone and I know it will be a huge challenge but that’s what life is all about.

“This is also my Mum’s favourite show and she’s had a really tough few years so I’m doing this for her as well. Bring it on!”

Who is Kym Marsh partnered with on Strictly Come Dancing?

Asked what style of dance she was most excited for, she said: “I am just very keen to learn. Watching it, I have done dancing before when I was a little girl and in Hear’Say but it was a very different style of dance.”

Who is Richie Anderson partnered with on Strictly Come Dancing?

During his Strictly announcement, the 34-year-old said: “This is a dream come true! I cannot wait to get in those sparkles and sequins and shimmy across the most famous dancefloor in the world.

“Strictly is the ultimate feel-good show – as soon as I hear that iconic theme tune it’s just pure escapism.

“I’m going to have to cancel my legendary Strictly launch night kitchen party that I throw every year. I’m sure my friends and family will understand.”

Who is Kaye Adams paired with on Strictly Come Dancing?

Kaye’s here to unleash her inner Latin goddess with Kai by her side 💃 #Strictly@kayeadams @Kaiwidd pic.twitter.com/ljvUcCf2BW

Loose Women star and journalist Kaye Adams has been coupled up with professional dancer Kai Widdrington.

Talking about her reasons behind joining this year’s Strictly cohort, the 59-year-old said: “I said I wanted to make the last year of my fifties memorable and I can’t think of a better way of doing it than showing the world my two left feet.”

Who is Jayde Adams partnered with on Strictly Come Dancing?

Speaking about the challenge, Adams said: “Since I watched the first series in 2004, I feel like every step I’ve taken in my career over the last 11 years was to be on Strictly.

“I cannot begin to express the emotions I am feeling, this means so much to me and my family.

“I’ve always watched it, apart from a brief hiatus in 2011 as I was relentlessly gigging every weekend (to try and get on Strictly).

“I’ve been a massive fan of the show for years.

“I feel like I’m watching myself in a dream and I can’t believe I’ve manifested this.

Who is Ellie Simmonds partnered with on Strictly Come Dancing?

The competition is on for Ellie and Nikita, our first couple of #Strictly 2022! 🏆@EllieSimmonds1 @kuzmin__nikita pic.twitter.com/s024ysGUhd

Five-time Paralympic champion and broadcaster Ellie Simmonds will be taking to the ballroom with professional dancer Nikita Kuzmin.

“I’m a tad nervous too, well more than a tad… I’m absolutely petrified!”

Who is Tyler West paired with on Strictly Come Dancing?

After the news was announced on Kiss Breakfast with Jordan Banjo and Perri Kiely, West said: “I am so gassed to be joining the Strictly family. As I started writing this I already got cramp.

“It’s going to be one crazy incredible journey which will no doubt be so far outside my comfort zone.”

READ MORE: Where are the Strictly Come Dancing winners now? Find out as 2022 series begins

READ MORE: BBC Strictly Come Dancing curse: Is it real, who has fallen to it over the years?

Who is Matt Goss in a couple with on Strictly Come Dancing?

They’re taking centre stage together on #Strictly. Matt and Nadiya are already off to a glittering start ✨@MattGoss @NadiyaBychkova pic.twitter.com/cYQGRCVKRV

Member of the band BROS, Matt Goss has been partnered up with Nadiya Bychkova.

Speaking about joining the Strictly Come Dancing cast, Matt said: “I’m extremely nervous and excited, but I’m optimistic because I’m very supple from the knees down.”

Who is Ellie Taylor paired with on Strictly Come Dancing?

Are you ready for team Jellie? 😃 Ellie and Johannes are going to have SO much fun on #Strictly!@EllieJaneTaylor @jojo_radebe pic.twitter.com/UaN9pQPs5Q

Speaking about joining the Strictly Come Dancing cast, Ellie Taylor said: “Well, cover me in fake tan and roll me in sequins! I’m absolutely over the moon to be a part of Strictly 2022!

“I’ve watched the show for years so to be able to take to the dance floor is a dream come true, for both me and mum who is a Strictly super fan!”

Who is Molly Rainford partnered with on Strictly Come Dancing?

This pairing is music to our ears 🤩 #Strictly starts now for Molly and Carlos!@mollyrainford pic.twitter.com/uBp2khVv4t

Speaking about her dancing debut, the 21-year-old said: “I’m so excited to be part of Strictly Come Dancing, I’ve watched it for years and can’t wait to meet the pros and the others taking part.

“I can’t wait to learn the moves and get dancing.”

Who is Tony Adams dancing with on Strictly Come Dancing?

Following the announcement of his Strictly appearance, he said: “To say I’m excited is an understatement – the lure of the sequins and the call of the salsa has me swapping my battered old football boots for a set of Strictly soft shoes.

“Am absolutely thrilled to be giving it my all on this year’s 20th anniversary of Strictly Come Dancing. I can’t wait to meet my partner – god help her – and start the dancing.”

Who is Fleur East in a couple with on Strictly Come Dancing?

Put their names together it’s #Fleurito 🔥 Fleur and Vito are going to be fire on the #Strictly dance floor!@FleurEast @Vito__Coppola pic.twitter.com/b17NRSTVnc

Singer and Hits Radio host Fleur East will be battling for the glitterball trophy with new professional dancer Vito Coppola.

Ahead of this year’s year’s series, Fleur shared: “For me, it is quite sentimental because my daddy passed away in 2020 and Strictly was his favourite show.

“When I was on The X Factor, in the breaks in the live studio, he used to check his phone for the Strictly updates because he was really annoyed that he couldn’t watch Strictly.

“I am going to be doing it for him. I am gutted that he can’t see me do it, to be honest. But I am just going to keep him in mind when I am doing the show.”

Who is Hamza Yassin partnered with on Strictly Come Dancing?

We’re sure duo Hamza and Jowita are going to be dynamic on the #Strictly dance floor 🕺@HamzaYassin3 @jowitaprzystal pic.twitter.com/eoC4UQddih

Wildlife cameraman and presenter Hamza Yassin will be taking to the ballroom with professional dancer Jowita Przystal.

After being announced on BBC Radio Scotland’s The Afternoon Show, he said: “I am absolutely over the moon to be joining Strictly 2022.

“Never in a million years did I think I’d be on such a cool show.

“I’ve been watching it for years and I can’t believe I’ll actually be there dancing live in front of the British public.”

Who is James Bye dancing with on Strictly Come Dancing?

Best known for playing the role of Martin Fowler in the soap, after the Strictly announcement, he said: “I’m not known for my shimmy or my twinkle toes – in fact, my kids regularly laugh at my dad dancing, but it’s an honour to be asked and I’m going to give it my best shot.

“There are some huge dance shoes to fill and it’s truly exciting to follow in the footsteps of some amazing EastEnders talent. I’d love to do everyone proud.”

Who is Helen Skelton partnered with on Strictly Come Dancing?

Will Helen and Gorka be a record-breaking #Strictly pairing? We can’t wait to find out 🎉@helenskelton @gorkamarquez1 pic.twitter.com/mwlO79k3QD

Blue Peter and Countryfile presenter Helen Skelton will be taking to the dancefloor with Gorka Marquez.

Speaking after she was announced for the 2022 cast, Helen said:”I’m really excited to get stuck into a fun adventure.

“My family and friends have always loved the show and can’t wait for me to get started.”

And just like that… our celebs have been ✨Strictlified!✨ #Strictly pic.twitter.com/b5xxNdzLE1

Here is what each of our celebrity couples will be dancing to as they take to the dancefloor for the first time.

The show has also released what tunes our favourite celebs will be performing to – what’s your favourite?

Strictly Come Dancing continues on BBC One at 6.45pm on Saturday, September 24.

Peter Cunningham: My brother's death left me longing for our lost mourning rituals

Police appeal after baby was hit with dirt in Horsham

“My neighbors have scooped £184million – I hope they use some of that to fix our broken fence.”