Whether you want to be the next big thing on Twitch or just want a little more control over your audio for your next stream, a quality setup is paramount. Something that’s easy to use, hassle-free, and intuitive lets you focus on the quality of your stream instead, rather than whether or not your audience can hear you clearly.

Enter BEACN – a new company dedicated to providing a seamless setup that ensures you can do it as intuitively as possible, whether you’re streaming or just want more control over your audio. Two mixers are offered, the BEACN Mix and the BEACN Mix Create, which are designed according to your needs. The former is a quick way to route your audio into multiple channels to give you finer control over what you hear; The Mix Create is aimed at streamers who need more features to enable the best possible broadcast.

At first glance, both devices are quite appealing and simply look classy. The screen dominates the device, clearly displaying mixes, volume levels and more. Below the screen are four incredibly smooth volume control knobs and, at least one, the Mix Create four knobs with one under each knob.

The difference between the Mix and the Mix Create is relatively simple: the Mix is ​​simply the screen and four fader knobs to control your audio. The BEACN Mix Create adds extra complexity and is slightly larger thanks to the extra paging buttons as well as knob paging buttons. 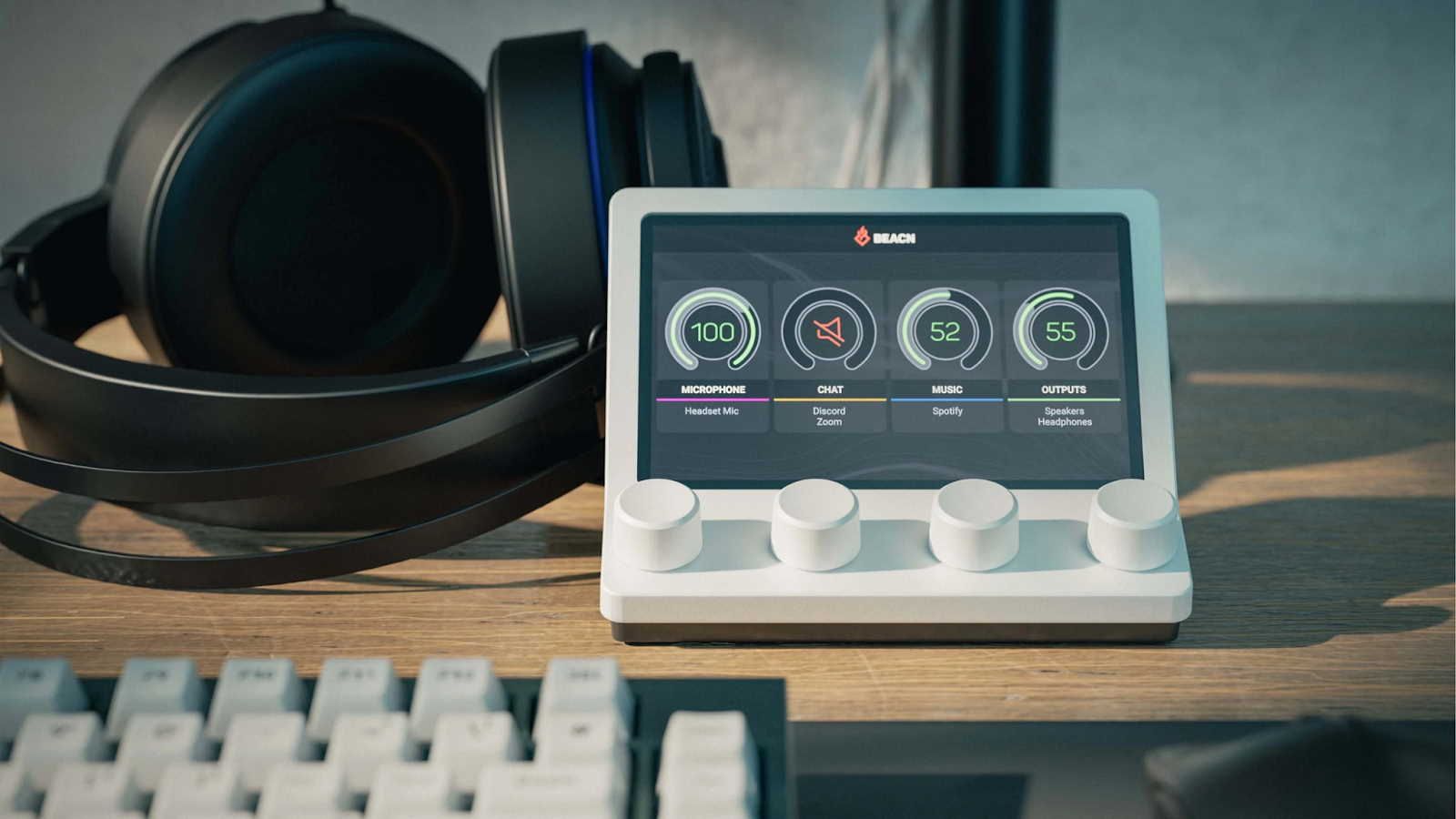 The device looks elegant on my desk and comes in two different finishes to match your decor: white or black. While my setup is mostly black, the white doesn’t clash too much – quite the opposite. It draws attention to the mixer, which is great because then I can tell anyone who asks about it.

Each is powered by a single USB-C port on the back of the device. No XLR input for microphones, no additional line ins or I/O; Just USB-C to PC. The idea behind it is simple: to give you the tools to control your audio setup, no matter what you’re using. As a result, much of the power comes from the BEACN software, not mini-amps, and more from the devices themselves.

If you already have an excellent XLR or USB powered microphone, you can use it seamlessly with the Mix or Mix Create. There is no need to connect multiple cables to the back of the mixer, just one.

This makes setup relatively painless. Just plug it in, download the software from the website and start routing your audio.

routing of the tables

From a software perspective, the BEACN mix is ​​relatively straightforward. When you connect the mixer, the software recognizes it and any audio sources or programs currently open on your computer that it could control. This is everything from microphones, playback devices, games and more. You simply drag and drop where you want the program to be directed, and you can independently control that program’s volume using any of the four sliders.

You can stack any number of programs on a mixer so you can control them all at the same time. It’s not like you have to have a single button for every program. The idea here is to put you in control.

However, since the BEACN Mix was not designed for streaming or content creation, it lacks some of the features of its more expensive sibling, such as B. Submixes and the complete routing table. It’s intuitive enough, though, and you can save multiple profiles and swap them out as needed, making it a good fit for pretty much anyone looking for that little extra control over their PC.

However, the BEACN Mix Create is a bit more complicated. While the device only has four knobs, you can theoretically create an infinite number of channels to route your audio through, and you can cycle through them easily enough thanks to the paging buttons on the device itself. Since Mix Create is aimed at content creators, it also includes submixes that allow you to independently control the volume of what you hear and what your audience hears.

The BEACN Mix Create also includes a nifty routing table to make it easy to choose what you hear, which channels you want the audience mix to hear, and a VOD track to bypass pesky DMCA issues with Twitch VODs. It is powerful yet easy enough to use. Simply select which channel should be present in each mix and you’re good to go.

The device itself can also be operated easily and intuitively on-the-fly. You can lock specific channels that you want to watch on screen at any time. This comes in handy when you need to switch to a channel but still want access to your microphone to mute it if needed. You can also mute channels based on whether you’re muting a specific submix or overall.

Unlike the BEACN Mix, BEACN Mix Create doesn’t have a drag-and-drop interface. Instead, you have to go into your sound mixer at the Windows level to assign programs to the different channels. This is nothing new if you’ve used an audio mixer before (the Elgato Wave Link and AVerMedia LiveStreamer NEXUS required the same), but it’s a little less seamless. The tradeoff, however, is that you can theoretically create unlimited channels to pass audio through, giving you even more control over everything.

Both BEACN Mix and Mix Create can send your audio to one of two monitoring devices. This came in handy when I’m both using my Razer Leviathan V2 at work but switching to my headphones when I need to take a call or late at night when my house is asleep. It’s also easy to switch on the fly: just push one of the buttons down and it toggles it for you.

Mix Create also gives you control over a Personal Mix and the Audience Mix, allowing you to customize what you hear and what your audience ultimately hears. You can also quickly swap that out to monitor levels using a paging button at the end of Mix Create. You can also set the levels for each mix on a channel independently, and then link them together so you can control both mixes with the fader while keeping the levels even.

BEACN Mix and Mix Create are pretty cool devices, and they definitely do the job they set out to do: give you more control over your audio and deliver it as seamlessly as possible.

At least the software works then.

The most important piece of the puzzle here for BEACN is the software. Without them, the device will not work as it should. Unfortunately, I had more problems with the software than I can count.

Nothing too big – it’s not that the software froze my PC, more like annoyance that forces me to restart the software multiple times a day when using it. For example, when moving audio channels in the BEACN software on my Mix Create, the device itself doesn’t update to reflect the moved channels – instead it sometimes doubles up, making it so that one of the faders is unusable until I restart that BEACN software.

There have been times when I’ve adjusted the volume on a fader, but it controls the channel assigned to a different fader. Also, if I booted up my PC and started a game that had previously been assigned a channel in Mix Create, I had to go back in, reassign it to a new channel, and then reassign it to the preferred channel just for it to work properly.

These little annoyances add up, making the experience a little lesser as a result. However, BEACN is actively updating its software, offering new features and new ways to control your broadcast. Since getting the units there has been an update that makes it easier to completely mute a channel, or just a mix, by simply pressing one of the fader buttons or the fader knob itself. This was a godsend for my mic as now I can either just mute to the audience and then mute all the way.

Additionally, the routing table has been updated to provide streamers, particularly on Twitch, with a way to use the separate VOD track on Twitch to circumvent music streaming issues with VODs. This allows you to route your music and audio to your stream as you normally would, but ensure that sounds that would cause problems with ad revenue do not appear in your archived VODs. This is HUGE and I can’t think of any other company that ensures this kind of control over the broadcast at this level.

Software issues aside, I can’t even imagine going back to my other mixers, which I’ll add you can actually control with the BEACN Mix Create. The performance and level of control offered by the device and software make me hesitant to return to Elgato’s great solution regardless of the issues. The ability to control almost every aspect of my audio presentation on the Mix Create, the ease of setup, and the quality of the device itself are superior to other mixers I own.

Certainly there is a big problem with both devices: LCD burn-in. Upon plugging in the device or booting up, there is noticeable burn-in on the picture where the mix channels would be. It’s subtle, and once the channels are on the display you don’t really see it, but it’s something to watch out for when grabbing a device, especially if BEACN decides to change their UI or custom UI- allow skins.

The real question I have is why would you buy the BEACN Mix when the Mix Create offers so much more for only a $50 difference? They’re so similarly priced that when I look at them I don’t feel the BEACN Mix is ​​value for money. If it were cheaper, say $99, then it makes a little sense. But with the limitations of the BEACN Mix compared to the added value of the Mix Create, I can’t recommend it over the other. I’d rather have all the features of Mix Create and not need them than not have them at all.

That means you’ll probably be pretty happy with whoever you go with. The devices are elegant, beautiful and easy to use. The buttons move effortlessly and the screens are bright, clear (though with the issue of minor burn-in) and easy to read.

While I’ve had issues with the software, it’s not a deal breaker given the amount of control and power at my disposal. The real issue is whether or not you can miss out on some of the more powerful features like submixes and the routing table by grabbing the BEACN mix via Mix Create. Either way, you won’t be disappointed.