DOZENS of neighborhoods could be among those hardest hit by the energy crisis if the price cap rises in October, the analysis says.

Analysis by climate organization Friends of the Earth found that one in five boroughs (18 per cent) in Brighton and Hove is most at risk of financial hardship if energy prices rise later this year.

The charity has warned that the crisis facing millions of people this winter “must not be downplayed” if bills rise as expected without government intervention.

Smart meters and unmetered fuel consumption were analyzed to identify areas where energy consumption is above normal levels, defining 30 neighborhoods in the city with above-average costs and below-average household income as energy crisis “hotspots”. 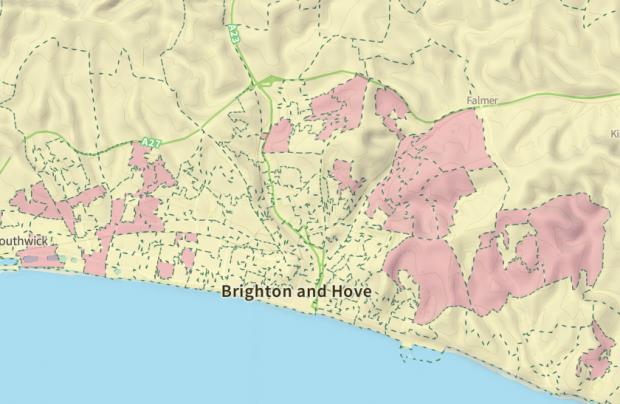 About 30 neighborhoods in the city are expected to be plunged into an energy crisis if prices rise in October: credit – Friends of the Earth

He said: “While Conservative ministers have refused to take any serious action to ease the cost of living crisis, we have rolled up our sleeves to do what we can.

“We have carried out several important works; The community hub – created to support the emergency of a pandemic – continues, helping people access welfare, food and essentials, and reducing fuel bills.

“We have also increased the amount available to help people pay for essentials like fridges and stoves.

“We are rolling out an insulation program for warmer, healthier community homes and have beefed up the community enforcement team so we can take action against landlords renting cold, leaky homes in the private rental sector.”

He also called for greater government action to help those struggling with the cost of their energy bills, saying: “Work is being done to help residents get into the winter months – however, shockingly, there is still none the government’s long-term plan to combat the appalling poverty in this country.

“With house prices, heating bills and the cost of living soaring, the government must act now to avert a full-blown crisis for thousands of households.”

Mike Childs, head of science, policy and research at charity Friends of the Earth, said the government needs to “step up its emergency financial aid package” and protect the most vulnerable from soaring price hikes.

He said: “There is no downplaying how disastrous this winter and the ones to come will be for millions of people if energy bills soar as they have been predicted, unless meaningful government action is taken.

“Instead of deplorable and misdirected cash donations or promises of tax cuts that don’t help those who need them most, the government needs to beef up its emergency financial aid package by channeling money to those least able to use their energy to pay bills.”

A spokeswoman for the Department for Business, Energy and Industrial Strategy said: “We are investing £6.6 billion in this Parliament to improve energy efficiency under the Government’s Help to Heat scheme, which is helping to make homes more affordable across the country to heat. ”

https://www.theargus.co.uk/news/20716993.brighton-neighbourhoods-risk-energy-crisis-named/?ref=rss Brighton areas most at risk of an energy crisis have been named

Putin says: ‘There can be no winners in a nuclear war and it should never be unleashed’

Explainer: What other countries are doing to help people facing a worsening cost-of-living crisis

Bank of England warns of ‘longest recession’ if rate rises 3%