According to staff, the gardens of the Royal Pavilion are “a place not safe to be in” at night.

Brighton and Hove Museums, the foundation that manages Pavilion Gardens, is working on improvements to the gardens to protect ‘the jewel in Brighton’s crown’.

It is hoped new plans will allay concerns about safety, anti-social behavior and littering in the gardens, which have been described as a “crime scene”.

Shaun Doyle, who has worked as security manager on duty at the pavilion for 25 years, said the gardens have a “double personality”.

He said: “During the day families play and children enjoy the gardens, but at night it becomes an unsafe place.” 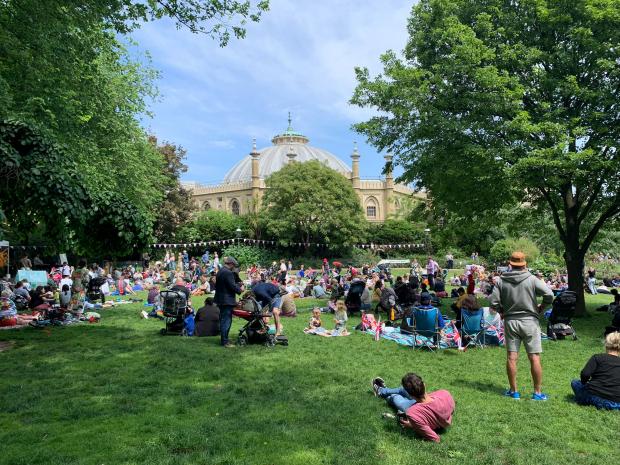 Around 130 crimes were reported in the gardens in just ten months between April 2021 and February 2022, a third of which were violent crimes, including assault, robbery and sexual offences.

He said the Trust has been forced to spend tens of thousands of pounds on extra security and cleaning staff.

Mr Swain added: “We are a non-profit foundation and every penny we have to spend is a penny we cannot spend on making the museums and pavilion better for people.

“What we have here is a very sad list of crimes, especially crimes against women, in these gardens at night.

“I don’t think I could look in the mirror as CEO if I hadn’t done anything to prevent crime against women in central Brighton, so we have to find solutions.”

Head gardener Rob Boyle told The Argus that he “sees the hangover every morning” and is being forced to clean up broken bottles and needles from the night before to protect children visiting the park.

He said: “Every morning I see broken glass, cans and we have young parents coming out to the garden in the morning – it’s not a good mix.

“We find needles fairly regularly. We have children snaking their way into some of the flower beds and there is quite a dangerous conflict going on there.

“That could help solve the problem if we could control people here at night.”

The gardens could be fenced off and closed to the public at night from 2024, according to plans currently under discussion

Suggestions to improve security in the gardens include the gardens being closed at night, with a consultation underway to discuss options with the local community, as well as tourists and people who do not wish to visit the park.

An open house for consultation is due to take place in October, with other proposed changes including widening of footpaths and improved planting.

Mr Boyle said the gardens had been “a victim of their own success” as high visitor numbers meant parts of the grass were used as an extension of a footpath, resulting in bare patches.

“I can fix that, but that would need to be done every year – so one idea we’re looking at is widening the footpath a bit to accommodate the step. It would also mean that we don’t do as much expensive repair work in the gardens.”

One of the few Regency Gardens in the world, the Grade II Listed Gardens were listed on Heritage England’s ‘At Risk Register’ in 2017.

Mr Swain said: “We have this incredibly important historic site right in the center of Brighton, which is both brilliant – because we have the visitor numbers and the challenges of being in the city center.

“We all have a responsibility to hand over the Royal Pavilion and Gardens in the best way possible.”

https://www.theargus.co.uk/news/20779092.brightons-royal-pavilion-gardens-not-safe-night/?ref=rss Brighton’s Royal Pavilion Gardens are ‘not safe’ at night.

Is Southampton vs Chelsea on TV today? Kick-off time, channel and how to watch Premier League games