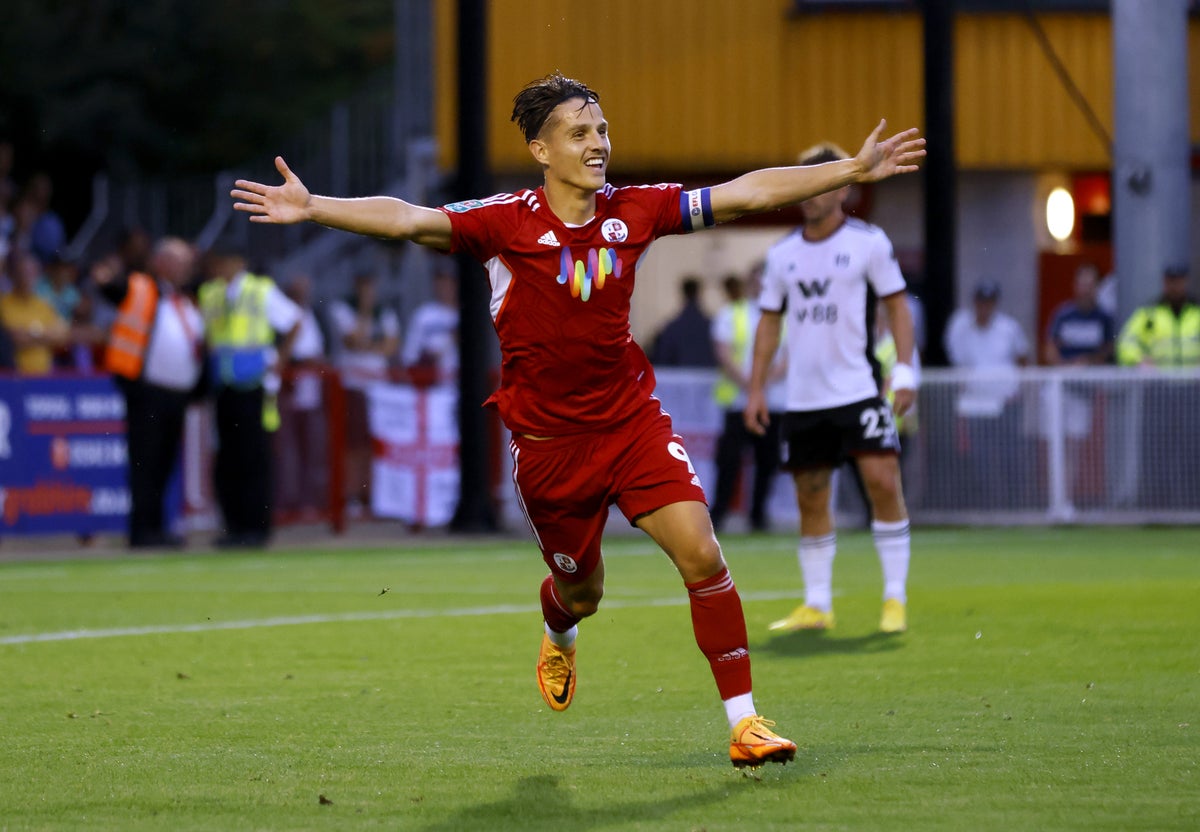 Crawley, from the second tier, sent Fulham into the second round of the Carabao Cup with a surprise 2-0 win.

Kevin Betsy’s side languish a place above the English Football League basement, but goals from captain Tom Nichols and Liverpool loanee James Balagizi led them to a well-deserved victory over their Premier League opponents.

Issa Diop made his debut for the Cottagers in a starting XI that has been completely overhauled, with 10 changes from their weekend win over Brentford.

Marco Silva’s men fell behind after 16 minutes and Ashley Nadesan supplied Nichols, who sent a low shot from the left into the far corner.

The skipper then became the assist for Balagizi, who doubled the hosts’ lead four minutes into the second half.

Stockport forced Leicester to a penalty shootout after neither side could find a goal.

Daniel Iversen impressed on his Foxes debut by saving three penalties in a clash that his side eventually won 3-1 on penalties.

Bournemouth also saw off Norwich after Brooklyn Genesini’s final equalizer also resulted in the game being decided on penalties.

Jordan Hugill scored in the 22nd minute before Emiliano Marcondes equalized just before the break.

Adam Idah’s strike in the 83rd minute looked like a likely winner for the Canaries before Genesini responded with a strike two minutes after second-half injury time and the miss from former Cherries loanee Todd Cantwell proved decisive proved to seal the fate of his team.

Two more ties were decided on penalties, with Lincoln defeating Barrow 3-1 and Gillingham emerging victorious after a 6-5 shoot-out in a tense battle with Exeter.

Second-tier hosts Stevenage appeared to be heading in the same direction in their duel with First-tier opponents Peterborough until Jamie Reid’s second-half heroics saw through his side.

Meanwhile, MK Dons, 22nd in the League One table, upset Championship club Watford in their 2-0 win at Vicarage Road, with Matthew Dennis and Darragh Burns scoring either side of half-time to save their side to get through

Aston Villa and Crystal Palace comfortably defeated their League One opponents Odsonne Edouard and captain Luka Milivojevic to seal a 2-0 win for the Eagles over Oxford.

Bolton were 1-1 with the Villans at the break but Danny Ing’s 63rd-minute penalty started a second-half rally that saw Lucas Digne and Leon Bailey put the game out of reach.

Everton advanced from League One after a narrow 1-0 win over Fleetwood, while Nottingham Forest celebrated a crucial 3-0 win over Grimsby and Brentford defeated Colchester 2-0.

Che Adams scored twice in Southampton’s 3-0 win over Cambridge, while second-tier Colchester were unable to find a way in a 2-0 defeat by Premier League opponents Brentford.

Louie Sibley’s strike in the 15-minute mark was all Derby needed to thwart West Brom, while the same result decided Burnley, Charlton and Morecambe’s victories over Shrewsbury, Walsall and Rotherham.

Sheffield Wednesday prevailed with a 3-0 win over Rochdale, while James Waite scored the winner in Newport County’s 3-2 win over Portsmouth and Adama Traore ensured Wolves beat Preston in a 2-1 win .

Elsewhere, Blackburn recovered from an early deficit and knocked out Bradford, Bradley Dack answered Andy Cook’s opener in the 18th minute and Dilan Markanday struck the winner in the 39th minute.