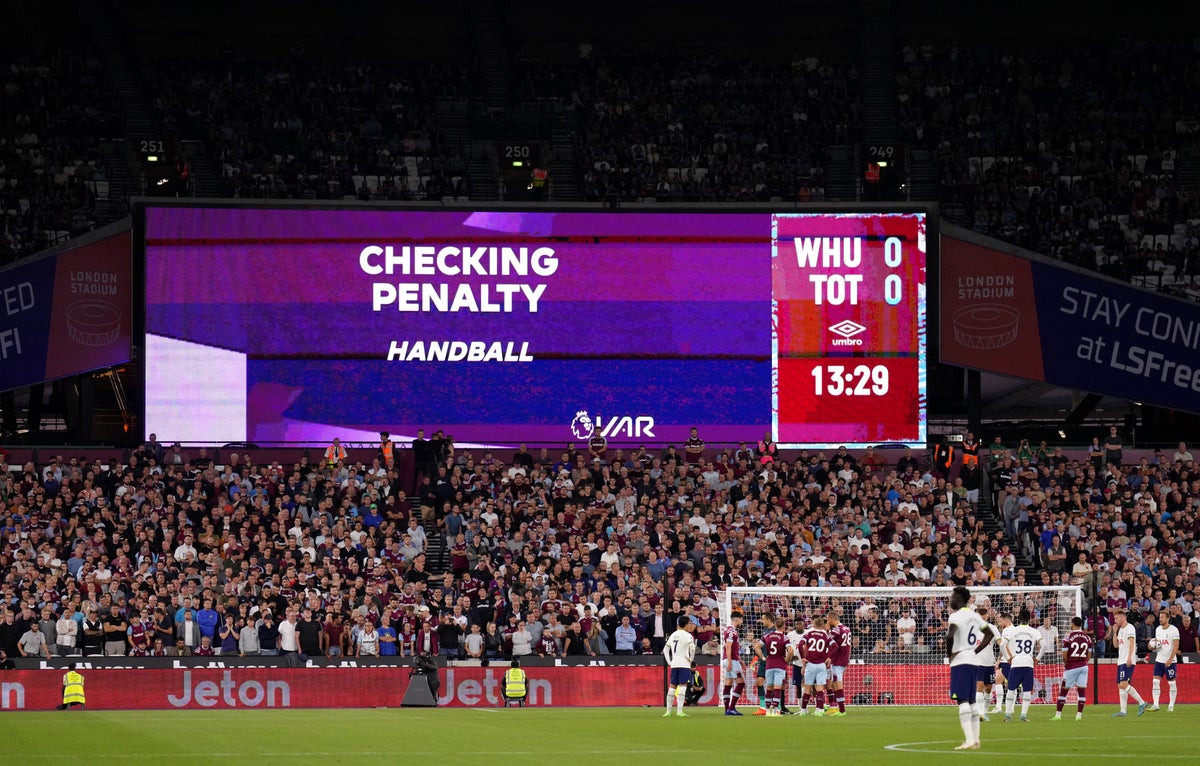 Antonio Conte insisted VAR wrongly overturned a correct penalty decision and claimed the system in that country was flawed after Tottenham’s 1-1 draw at West Ham.

But after a four-and-a-half-minute review at Stockley Park, referee Peter Bankes finally went to the monitor, which showed the ball had struck Creswell’s face in front of his arm, and overturned his own decision.

“I said to him at the end of the first half: ‘You made the right decision’ and VAR certainly embarrassed the referee. Getting him to change a right decision was really weird.

“In England, they have to learn a lot more to use VAR properly. You have to study very well and be more precise.”

Tottenham took the lead on a classic counterattack after Eric Dier intercepted a one-two between Declan Rice and Said Benrahma on the edge of Spurs’ area.

Dier’s first pass found Kane, who served Dejan Kulusevski before sprinting past him on the outside and conceding the return ball.

Kane’s cross was destined for Son Heung-min but West Ham defender Thilo Kehrer was there first and deflected the ball into the net, preventing the South Korean from scoring his first goal of the season.

However, the hosts secured a first home point of the season when Tomas Soucek conceded a clever flick from Michail Antonio and fired the ball home.

“In the end I think we had a chance to get three points,” added Conte.

“On the one hand we must be a bit disappointed with the result, but on the other hand it’s not easy to play against West Ham in this stadium. We conceded a goal that we managed to avoid. But in the end a point is good.”

David Moyes gave the club-record £52m for Lucas Paqueta a debut as a substitute, although he previously admitted the Brazilian hadn’t even passed a ball to his new team-mates, having only arrived from Lyon on Monday.

That was shown when Vladimir Coufal recovered the ball four minutes from time only for Paqueta and colleague Emerson Palmieri to abandon it 10 yards from goal.

Moyes said: “It’s difficult, he never trained with us because we didn’t have time, but we knew enough about him that he could be creative.

“It was a small cameo, but I’m really looking forward to working with him.”

Moyes admitted the canceled penalty was a pivotal moment.

“A draw is a good result, but I would have liked to have won. The turning point was the penalty in our favor,” he added.

“As the game progressed, we grew into it. We stuck with it. What I see encourages me. We are trying to work towards a new page.”