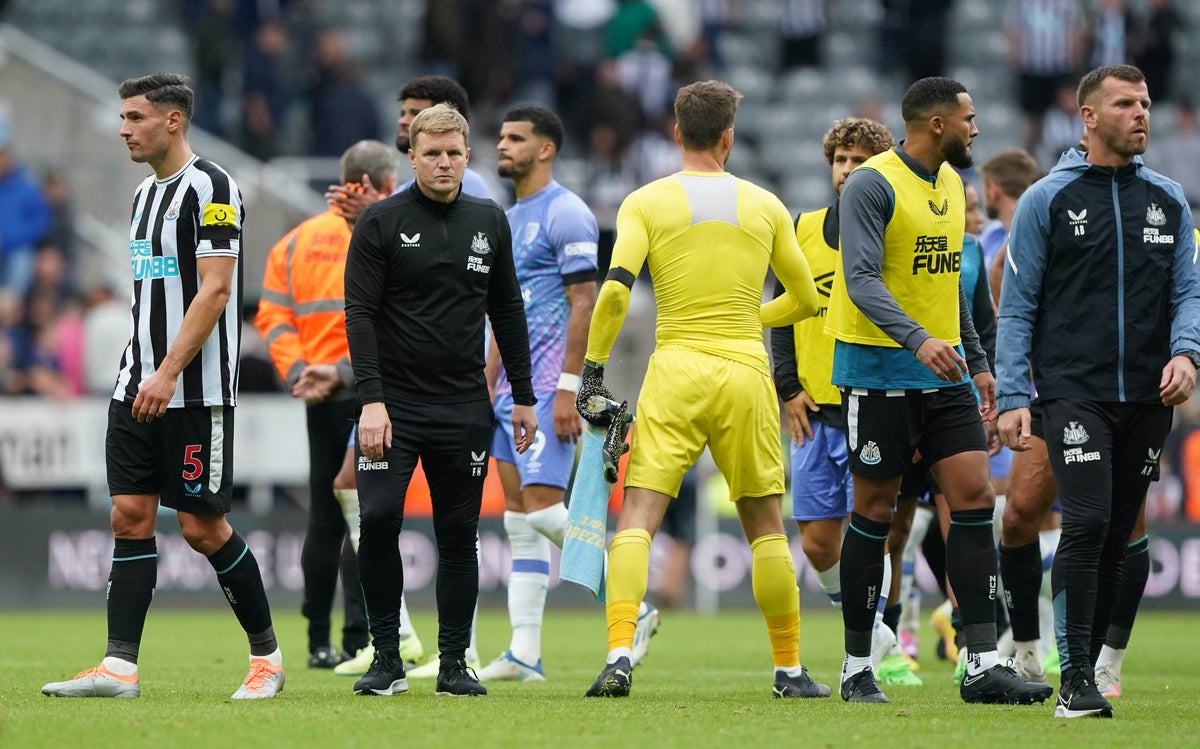 Eddie Howe made no apologies for his side’s underperformance after Newcastle had to settle for a frustrating 1-1 draw with Bournemouth at St James’ Park.

Howe’s first management game against his former club threatened to turn into a nightmare when Philip Billing put the Cherries ahead in the 62nd minute.

The Magpies had failed to convert their territorial possession into chances but grabbed a lifeline three minutes later when VAR decided a handball against Jefferson Lerma, allowing Alexander Isak to equalize from the penalty spot.

Howe said: “It was disappointing today – I thought it was a below-the-level performance that we set for ourselves and it was probably our first dive of the season.

“It’s hard to say why at that moment – they defended very deep and it was our responsibility to break through and I just felt like we were a little off in every aspect of our game.

“It was probably embodied by the last 20 minutes where we score and it looked like we were ready to win but our decision making failed us. It was a difficult watch – we could have won the game and it slipped away from us.”

Their draw left the Magpies still looking for their first Premier League win since the season’s opening day, but with a single defeat on their tally, Howe won’t go into the international break in panic.

“I think there’s a sense of frustration in terms of points because most of our performances have been strong and we deserved more, but the reality is we didn’t win those games,” Howe added.

“There were many things we didn’t do well today, but the most pleasing thing is that we suffered a goal deficit and didn’t lose the game. We can take a lot from today into future challenges because it is still something new for the group.”

Bournemouth boss O’Neil admitted some frustration at his side not being able to take all three points and criticized referee Craig Pawson’s decision to award the penalty against Lerma.

“I understand it’s difficult and I understand the umpire went (to the monitor) but I’m surprised at the conclusion he came to,” O’Neil said.

“Jefferson was in the way of the ball and his arm swings when he moves, he’s not looking. If I had looked at the VAR pictures, there was no way I would have awarded a penalty at that moment. I found it hard.”

O’Neil stressed that he still has “no thoughts” about the possibility of a permanent acquisition, although his star continued to rise after another robust performance that extended his unbeaten run since replacing the sacked Scott Parker.

“We went to Nottingham Forest two weeks ago and were dealt a heavy blow just before half-time with a VAR penalty that put us 2-0 down and anyone watching thinks the lads are dead and buried ‘ said O’Neil.

“Today when it goes 1-1 you can hear the court rocking and I thought it’s coming let’s see what you’ve got and they stood up. We spoke about managing the crowd and the atmosphere and they were excellent at it.”

https://www.independent.co.uk/sport/football/eddie-howe-jefferson-lerma-bournemouth-premier-league-newcastle-b2169521.html Eddie Howe admits Newcastle went off the pace in the home game against Bournemouth