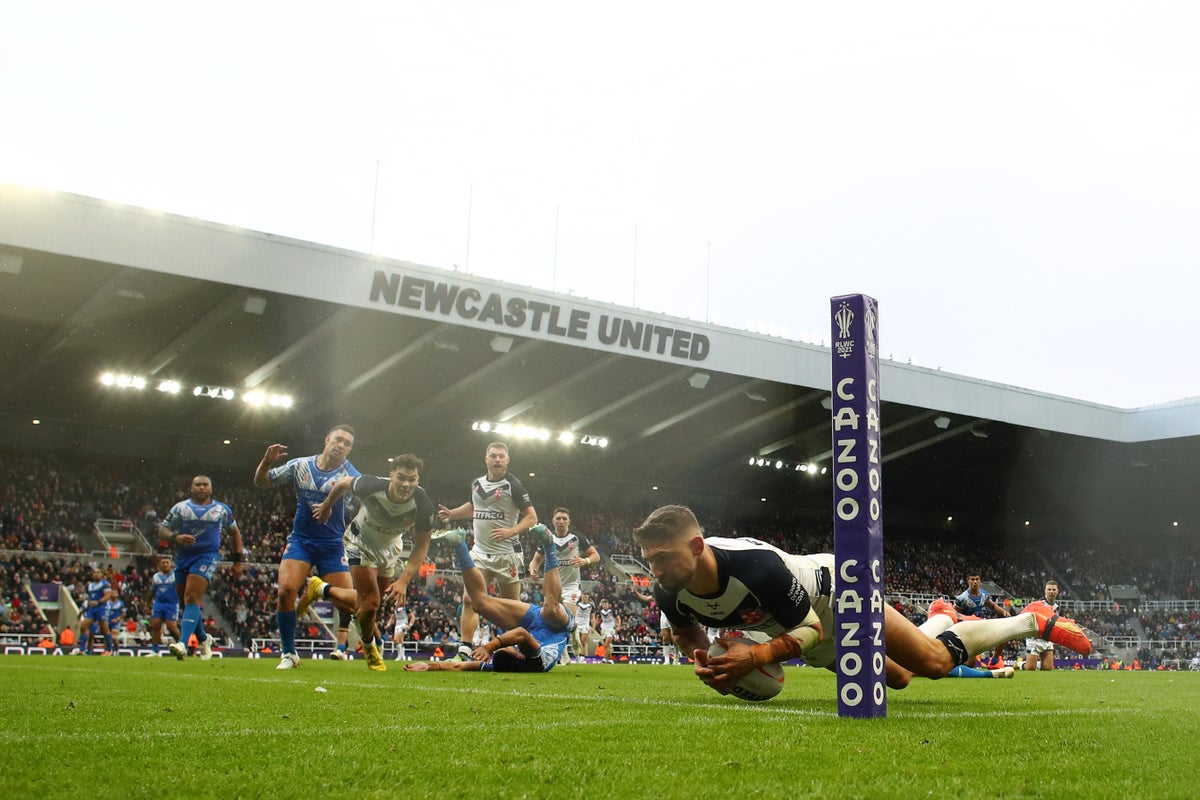 England made a nonsense of underdog day as they brushed off the challenge of star-studded Samoa for a winning start to their World Cup campaign.

Former Huddersfield winger Dom Young justified his selection from England’s record goalscorer Ryan Hall by scoring twice in the first half as Shaun Wane’s men clinched a 60-6 victory in front of 43,119 spectators at St James’ Park .

A technical error that forced the Kaiser Chiefs to halt pre-game conversation was quickly forgotten as England got off to a quick start and took an 18-0 lead within half an hour from which they never looked back.

Winger Tommy Makinson led the streak with 24 personal points, scoring one of England’s 10 tries and adding 10 goals from 12 tries.

So much was expected from Samoa, who were hoping for a first win against a Tier 1 nation.

The departure of Penrith’s Grand Final-winning duo Jarome Luai and Australia’s Brian To’o helped Matt Parish’s men become pre-game favourites, but without a warm-up game they were very ill-prepared and lacked any cohesion .

They will improve significantly as the tournament progresses and will need to when they meet Tonga in the quarter-finals, while England can now look forward to a likely round of 16 encounter with Papua New Guinea.

Expecting a tough attack in attack, England manager Shaun Wane benched four forwards and the tactic paid off as Samoa was rolled over.

Wane handed competitive debuts to the NRL-based trio of Young, Herbie Farnworth and Victor Radley, and impressed everyone with a thoroughly impressive overall performance.

It was a nearly perfect first 40 minutes for England when half-back Jack Welsby, who once again belied his youth, and George Williams were on their feet.

Props Chris Hill and Tom Burgess laid a good platform and both were close to scoring, while Farnworth was banned from a try after winning the race after Williams’ kick on the line.

Makinson opened the scoring with a sixth-minute penalty and Burgess was disallowed a try before skipper Sam Tomkins put Williams through a gap and Welsby assisted the touchdown in the 18th minute.

Welsby then delivered cut-out passes for Young to make two passes in the space of five minutes, the Newcastle Knights flyer demonstrating the exceptional finish he showed in the warm-up game against Fiji.

Two Makinson conversions brought the score to 18-0, but Samoa, so disjointed in the first quarter, began to show their threat.

Center Izack Tago took Welsby’s pass to sprint 60 yards for an opportunistic try that was converted by Stephen Crichton, who also came close to a try himself just before the break.

But the comeback was erased eight minutes into the second half when center Kallum Watkins took Mike McMeeken’s pass to make England’s fourth try, to which Makinson added his fourth goal.

Samoa showed their frustration in the 62nd minute when scrum half Anthony Milford fell for a late tackle on Tomkins and Makinson’s second penalty gave England a four-point lead.

And there was no turning back for the visitors as Farnworth used the extra man to give England’s fifth try two minutes later and Makinson scored his sixth.

England were on a run at this point and Elliott Whitehead went by twice in the space of three minutes before Makinson landed Williams’ kick for a corner and Burgess bundled his way over a minute from time to seal the goal and a hugely impressive win for the tournament achieve host.

Just look at Nancy Pelosi and tell me again - how are women too emotional and unpredictable for politics?