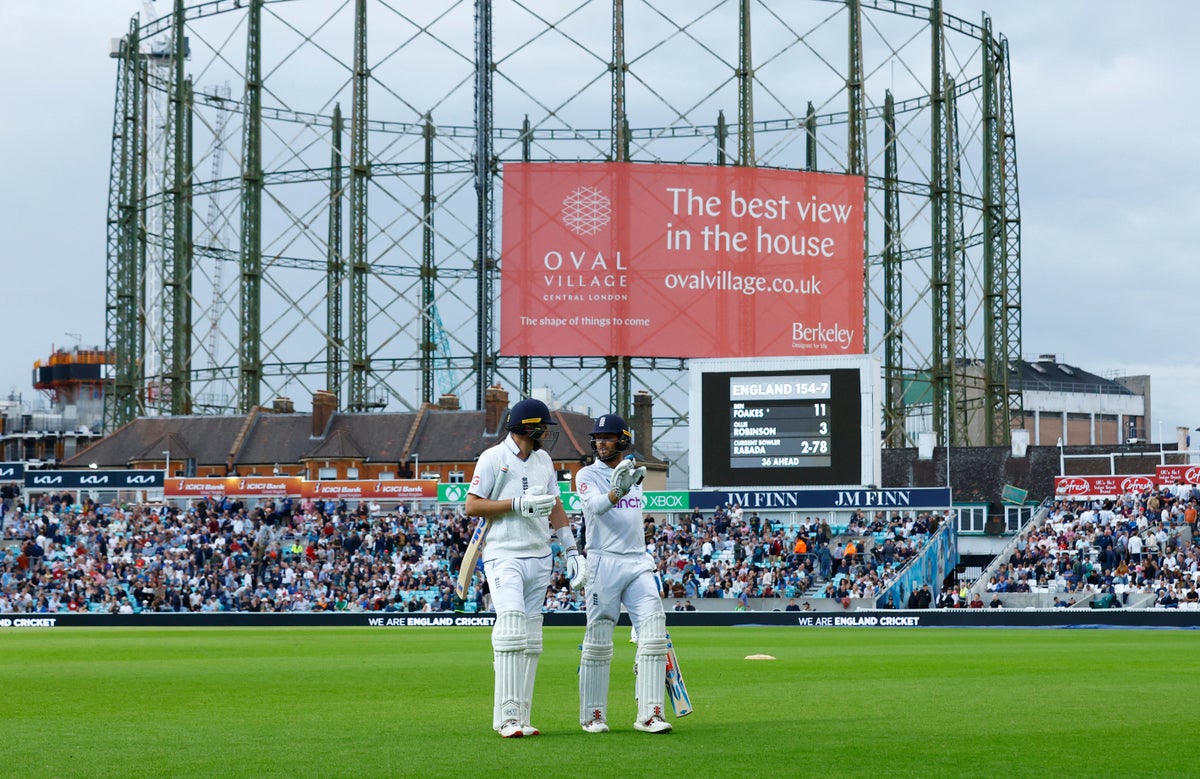 England continue Day 4 with a 36-run lead after reaching 154 for seven when wickets tumbled on Day 3 and seaman Ollie Robinson won five for 49 to bowl South Africa for 118 at The Oval.

England got off to a quick start after Day 1 was washed out by rain, while Day 2 saw no game for Queen Elizabeth II. But the ECB, unlike other sports, chose to continue on Saturday with an exciting streak that finally came to an end after the Proteas won the first Test, only for Brendon McCullum’s side to react brilliantly and end the streak with victory in the second Test balanced .

After England won the toss and knocked South Africa out of the bowling cheaply, England also struggled with the bat and ended up with a slim advantage. Ben Foakes was not out at 11 and Robinson at 3 when the umpires brought the game to a halt due to poor light, with left-arm paceman Marco Jansen nearly hitting Robinson with the ball, gaining four wickets for 34 runs. Follow all the action on day four of the third test below:

England lead by 36 points at the end of day three

Early in the day, England captain Ben Stokes promised exciting action as the Test resumed after the death of Queen Elizabeth II, and he delivered.

After a somber and respectful tribute to the late monarch, play began as South Africa were asked to bat first. England were at the top from the start, tearing through the top order thanks to an exceptional spell from Ollie Robinson. He finished with five wickets as England sacked the Proteas for 118.

In response, Ollie Pope scored 67 goals, but wickets continued to fall around him until poor light halted play just after five-thirty. England managed to sneak up front and with Ben Foakes and Robinson at the crease, they lead by 36 runs.

17 wickets and almost 300 runs a day, what does tomorrow bring?

Just us in the morning as England push forward before knocking South Africa out cheaply again. As Ben Stokes says, “at least it’s going to be exciting”.

Ollie Robinson not out 3(2)

That’s it for today. The umpires called stumps on Day 3 with England leading by 36. They had a fantastic morning and early afternoon bowling South Africa for only 118.

Ben Stokes’ men were well positioned to take a comprehensive grip on this game but the batting lineup faltered and the lead is just 36.

Ollie Pope hit a more than respectable 67 and Joe Root came out with 23, but none of the other batters came up with a significant score.

With the referees taking light reading, play cannot continue until it gets lighter, which seems unlikely at this time of year. There were 17 gates fall today and England is just ahead.

Referees will keep players clear until seven and unless the light improves they will likely end the day’s play.

Ollie Robinson is the new hitter and comes down the middle with a nice controlled on-drive over three runs. With two deliveries remaining in Rabada’s 12th over, the referees take light reading and take down the players.

Bad light stops the game! That could be it for today.

Rabada gets tired of throwing the ball up for Broad and slams a short ball in his body. Broad tries to hook it up the side of the leg but gets one slight edge on the ball and flips it through to Kyle Verreynne, who is clutching the ball catch.

It’s getting pretty grim out there now as Nortje finishes another over and possibly his spell. Play can continue until 7:30 p.m., but light will become a factor as the day progresses.

150 for England! Foakes snaps Nortje off his hips to increase England’s 150, their lead is up to 32 and Foakes is batting well. He’ll have to arrange the tail by the end of this inning.

Two runs for foakes from Rabada’s last over but the wicketkeeper is lucky enough to miss a ball that rears up and walks away from his outer edge. It is a Seamer Jaffa.

Stuart Broad has since seen a couple of full deliveries and this time he laces his shot through offside for four runs!

https://www.independent.co.uk/sport/cricket/england-south-africa-live-stream-score-updates-b2164703.html England vs South Africa LIVE: Cricket scores and latest updates from the third test at the Oval today

Arlene Hunt's While She Sleeps will have you hooked before bedtime

Actress Brenda Fricker: "My mother hit me in the face - she couldn't control herself"