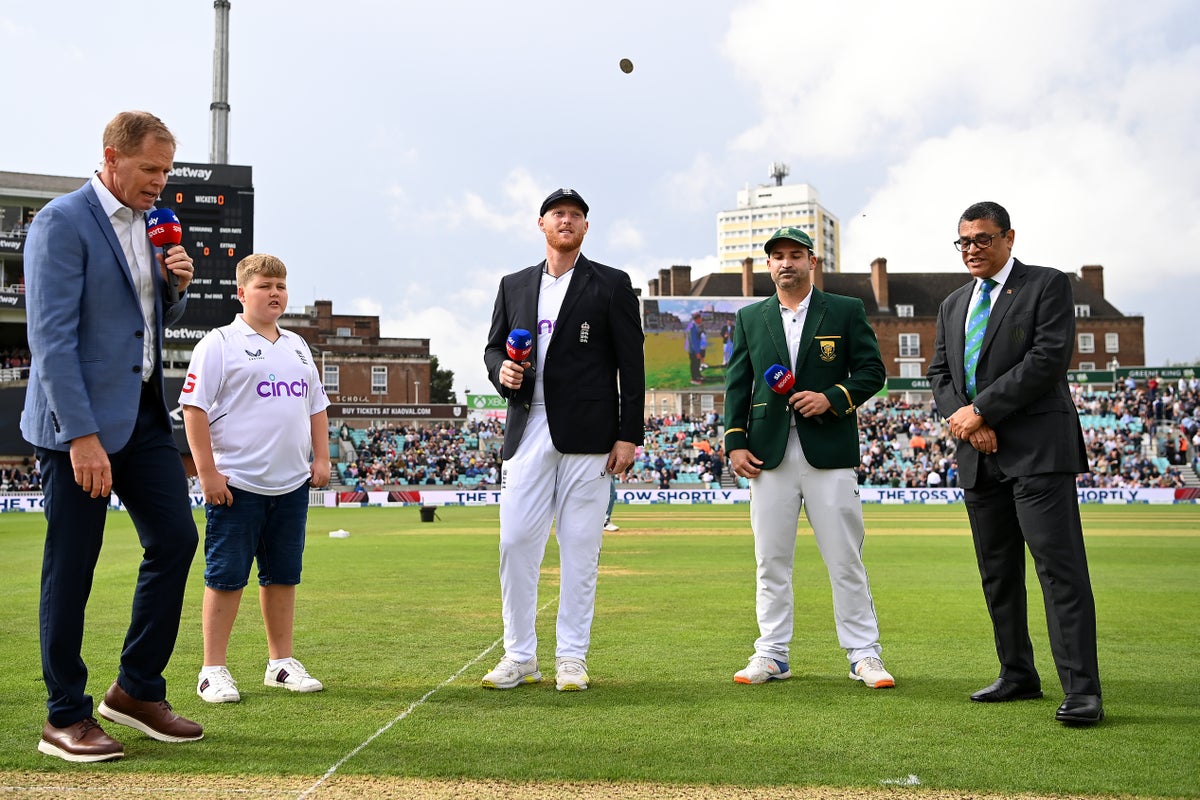 England end the summer at The Oval with their third and final friendly against South Africa. Ben Stokes’ men suffered their first loss under his leadership as the Proteas won by an innings and 12 runs at Lords to take the lead in the series, only for England to bounce back at Old Trafford with an innings win of their own and that Team left three game streak at stake when teams meet in London.

At the start of the summer Stokes took over as captain of the England Test matches from Joe Root and Brendon McCullum became head coach. Under her guidance, England have won five of their six Test matches, including a series win against World Test Champions New Zealand and a series draw in the belated fifth Test match against India.

Follow all the action from the third test between England and South Africa:

The ground crew is busy as a bunch of dark clouds have gathered over the top of The Oval. It’s pretty dark out there and the blankets are being raised in preparation for a downpour.

Players are ready to go, but it looks like the launch will be delayed yet again.

Anderson plays in the 175th Test

Also that morning James Anderson was presented with a new test cap for reaching his 175th match. 175! What a feat for England’s greatest bowler of all time.

Here’s a look at the two teams. South Africa have strengthened their batting side and face an early test against James Anderson and Ollie Robinson.

Dean Elgar lost the toss and will open the batting for South Africa. He says the surface looks good for batting, but the first session could be difficult.

“It looks like a good surface but there might be something to it in the first session so we need to tackle that racquet in hand and start well.” said the captain of the Proteas.

“Talent and skill are one thing but something I really look for and like in a cricketer is when they show character and that’s what we need.

“We didn’t have the best second Test but it’s still 1-1 and we would have put that in the series.

“Runs are key. We covered the 20 wickets with our bowlers but we have to give them a chance to hit well and bowl some.

Stokes on why he decided to bowl first

“It’s a bit of strategy and the pitch. We did well at bowling first this summer and with the weather we had it was a bit obscured and hopefully we can use covers,” said the England captain at the draw after deciding in the third test to roll first against South Africa.

“I’m massively disappointed in Jonny [Bairstow]. He’s been phenomenal and spearheaded what we’ve done and he should be very proud of that and what he’s accomplished. Harry Brook absolutely deserves this opportunity. I’m really happy that he’s going and showing what he can do.

“I don’t think our approach will change because of the change. We will play what is in front of us. We’re going to focus on bowling this morning and then as the game goes deeper we’ll play the game ahead accordingly.”

Ben Stokes won the toss and chose to bowl first. Stokes says the team has had some success bowling this summer and with the pitch being overcast for a while and the weather circling, he’s feeling like bowling.

Ollie Pope is just under 14 months older than Harry Brook but he is ready to take on a mentoring role ahead of the latter’s likely England Test debut.

Yorkshire slugger Brook, 23, is all but certain to replace the injured Jonny Bairstow on Thursday as England begin their crucial third Test against South Africa at the Oval.

Pope has played 28 friendly matches since his debut against India in 2018 and admitted the pressures of international red ball cricket can surprise even the most prepared player.

Brook from Yorkshire will almost certainly replace the injured Jonny Bairstow against South Africa on Thursday.

At the moment it’s dry and sunny over The Oval, but the weather radar says heavy showers will hit around 11:30am – just when the game is due to start.

It appears to be a similar situation to the Lords game where it rained heavily in sporadic bursts meaning a lot of water had to be removed.

Today could be a stop start day but looking ahead the weather for the weekend and Monday is looking excellent. This could play a role in the throw.

Win the Toss and Bowl first?

Ollie Pope is enjoying his new role as England’s number three and believes he’s done enough to make it his permanent job.

England’s revamped Test leadership team of captain Ben Stokes and head coach Brendon McCullum promoted the 24-year-old to third place ahead of the series with New Zealand in June, and Pope heralded his arrival with a second Test tone at Trent Bridge.

The Surrey right-hander will be hoping to repeat his success when the squad start Thursday’s crucial clash against South Africa but reckons his trial period could be over.

“I’d like to believe that,” Pope said. “We don’t talk too much about these things but the feedback I’ve had has been great and I think the confidence that’s been given from upstairs by McCullum and Stokes has been great too so hopefully that can help me further install at this point and I approach the matter with a slightly better attitude.

Did Harry Styles spit on Chris Pine? Only in fan fiction

Lightning and thunder are forecast for Brighton and Hove today