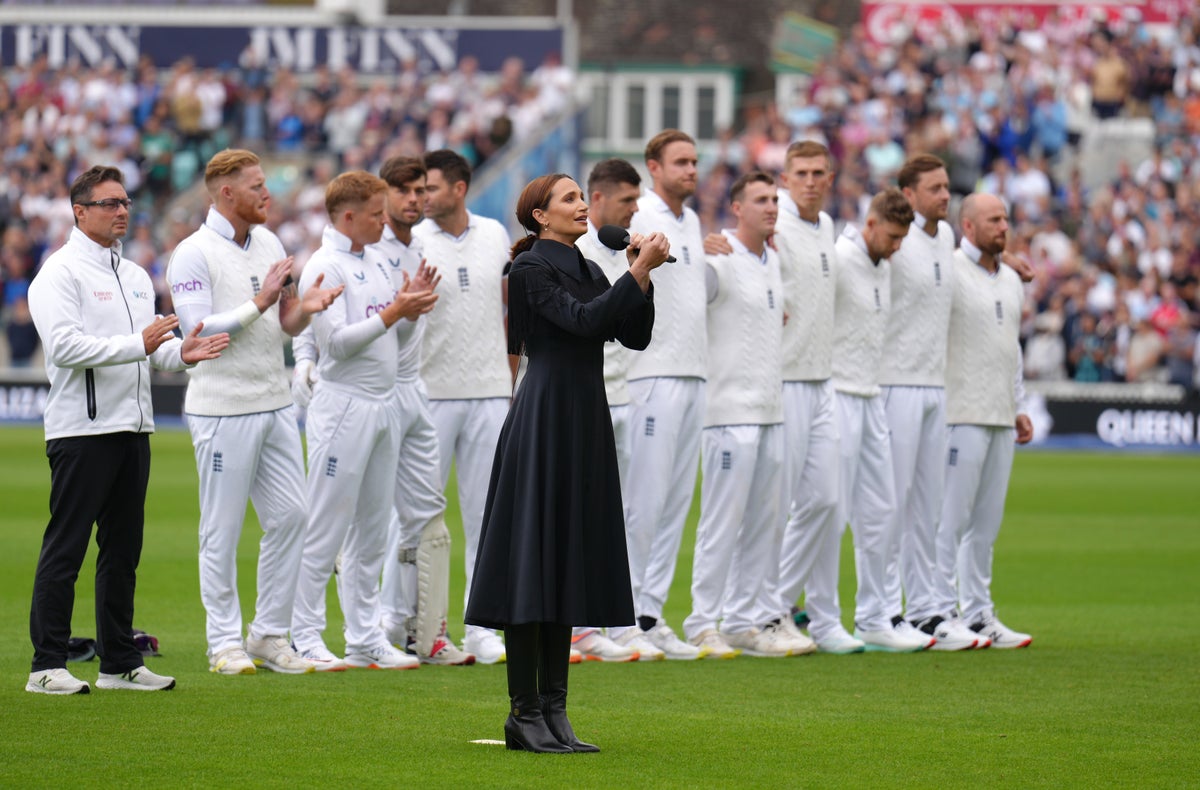 Ollie Robinson admitted there was a little trepidation in the England camp singing the new national anthem – as some players were wary of misinterpreting the wording.

England paid their respects to the Queen, whose death was announced by Buckingham Palace officials on Thursday night, ahead of day three of the third Test against South Africa at the Kia Oval.

There was silence as the players came onto the field through a military guard of honor and a minute’s silence was broken only by the chime of the senior military official present.

The national anthems of both teams were sung by soprano Laura Wright and the crowd joined in a moving rendition of God Save the King before spontaneous and sustained applause erupted.

Robinson, who then took Test-best five at 49 when South Africa was sacked for a paltry 118 before England closed for seven at 154, was enjoying a unique and momentous event but showed there was some apprehension in the dressing room about not slipping into old habits when the hymns were sung.

“We had to remember what we were actually going to sing. A few nervous figures were walking down the steps,” he said.

“Sharing our respect in the way we have has been a great honor for us and the stillness we experienced as we walked down those steps is something none of us have ever experienced.”

While Robinson was up to the occasion, the seaman insisted he didn’t feel any extra pressure given the morning’s events, with England captain Ben Stokes saying before the game “the show must go on”.

“Ben’s message was pretty clear: just go out there, be positive and try to force a result, play brave cricket and I think that’s what we did here,” Robinson said.

This LV=Insurance series decision was reduced to a three-day affair after Thursday’s washout and Friday’s washout were canceled in a show of respect to the Queen, with South Africa refusing to deviate from its original Tuesday return home itinerary, and no possibility of an extension.

But victory for both sides – at 1-1 in the series – looks more likely than at the start of the day, when 17 wickets fell to fast bowlers in a jumble over a couple of hours.

England’s seafarers – led by Robinson, with Stuart Broad starting 4 for 41 – used some helpful conditions to put themselves ahead, although South Africa went from 36 to 6 thanks to a 30-shot by Marco Jansen, who took 4 for 1, recovered 34 in the hosts’ response.

England pressed the accelerator and some were guilty of loose hitting, meaning they have just a 36-run lead in the first innings, thanks largely to Ollie Pope’s 67-ball from 77, but Robinson insisted on the aggressive approach they adopted and under Stokes The summer was the right one.

“You saw when the South Africans were batting, if you sat there and had Test match bowlers throw six or 12 balls in a row at you, you would fold,” he said.

“The kind of cricket we want to play is brave cricket and positive. We want to force a result in this game and that’s what we’re trying to do.”

While Robinson celebrated his third five-wicket haul in 11 Tests, with his England bowling average now under 20, the Sussex sailor admitted he wasn’t as fluid as usual.

“Actually, I wasn’t feeling that great,” he added. “My run-up was everywhere, I couldn’t find a rhythm, I was really just trying to focus on hitting length. It’s not the best I’ve ever felt.”

Why is U.S.-born Eileen Gu snowboarding for China?

England ‘ready for anything’ when taking on Germany – Sarina Wiegman