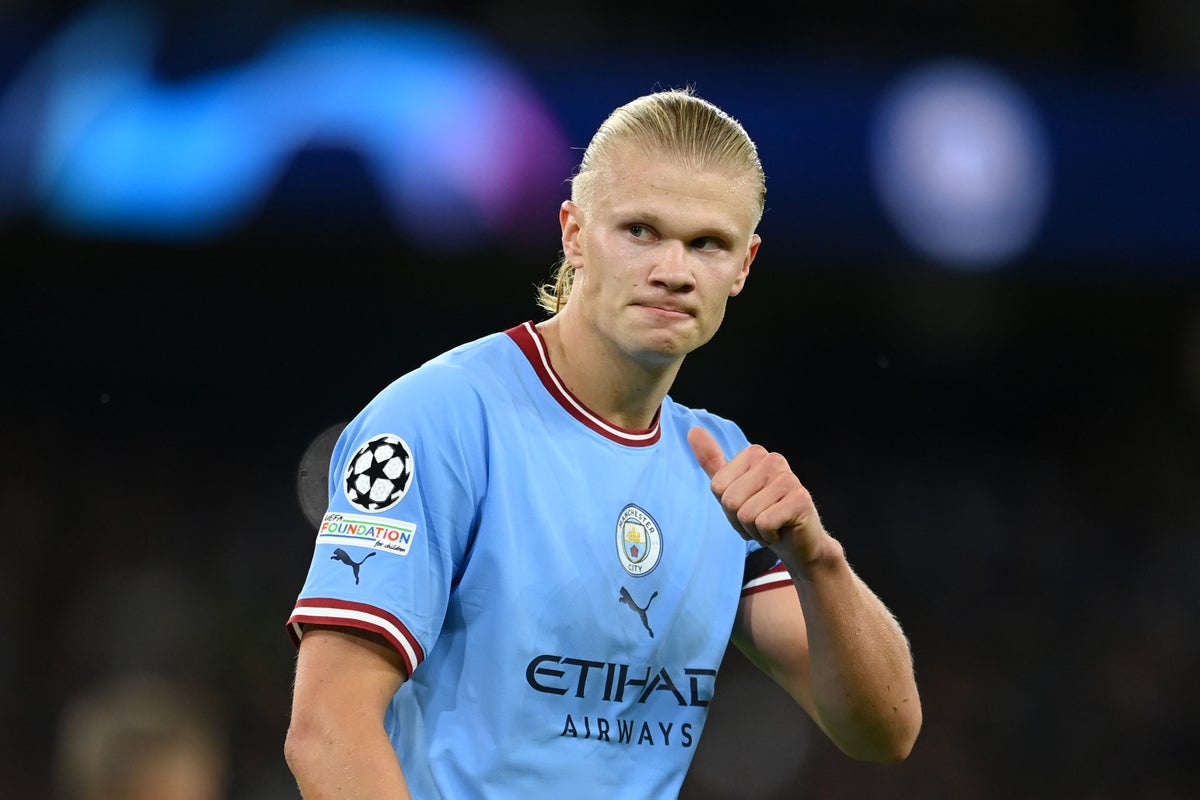 Erling Haaland has shown that he can be successful for both City and Dortmund. Admittedly not when he played for Dortmund against City, but eventually he scored after a club and color change. The goal that felt inevitable in the groups’ draw came in exceptional fashion as Haaland contorted his huge physique, volleyed almost at head level and hit Joao Cancelo’s outside cross with an outside finish. Maybe only he could have achieved it. Cruel for Dortmund, he did.

In just 20 games he took his Champions League tally to 26 goals – even counting the two times City have ruled him out – leaving him just adrift of Rivaldo and Luis Suarez and Dortmund glimpsing a fleeting victory had left defeat bereft. The surprise was not that Haaland scored, but John Stones, and in such a spectacular way. If lightning can dodge, it did. Goalkeeper Alexander Meyer looked puzzled.

Those in yellow and black are more used to seeing Haaland partying. He scored 86 goals in 89 games for them and if that wasn’t enough reason to rue whoever got away, their poached successor, Sebastien Haller, was cruelly sidelined. But Jude Bellingham’s opportunistic finish showed Dortmund have other avenues to score and make money.

The Ruhr area is Germany’s industrial heartland and the Englishman is supposed to be the next one off the assembly line and into the talent factory. Haaland was a bargain at £51m and it will take more to buy Bellingham but Pep Guardiola has been ambushing Dortmund since his days as Bayern Munich manager. Then Robert Lewandowski was his distinctive signing. Haaland was this summer’s big buy.

But a day after Lewandowski’s unproductive return to Bayern, the Norwegian enjoyed a happier reunion. In the end he was applauded by many in the traveling Dortmund support, taking on his regular role as match winner and with an 11th goal in six games.

Dortmund had defended well, denied him many chances, and yet he was inches from goal and almost at the bottom of it all. Haaland had cut the outer post after a concise pass from Kevin de Bruyne. City’s problem was that alongside the tireless Belgian, Haaland starved in a first half when they missed a shot on goal. Riyad Mahrez, Jack Grealish and Gundogan were all subdued and substituted.

Perhaps the familiarity has given Dortmund an understanding of how to stop Haaland. Certainly cutting off much of the supply line helped. Likewise, the accuracy in the provision of last-second interventions. A stretching Meyer caught De Bruyne’s cross as Haaland eyed a tap-in. He almost hit the Belgian’s pass when Mats Hummels intercepted. The skidding World Cup winner again intervened invaluably on a cross from Phil Foden.

He was great. He was part of a central defender team that could be seen as Bayern’s flagship: Traffic between Dortmund and Bayern is not a one-way street. Alongside him, Niklas Sule walked away from under his own bar to stop Haaland spinning into Mahrez’s back. Sule, who may wear the biggest jersey a footballer has worn since Neil Ruddock’s heyday, presented an unlikely but tenacious opponent.

He hardly looked like a footballer but created an impressive barrier to goal. Sule’s arrival from Bayern Munich helped Akanji exceed requirements; as well as the summer signing of Nico Schlotterbeck and coach Edin Terzic, who had just signed him as a third central defender to celebrate a famous win when Stones scored.

The plan, it seemed, was to oust Haaland. He had the fewest touches in the first half, although that’s not surprising. Such can be the life of the poacher, the player with the fewest touches but the most important interventions. They live a life of quality, not quantity, but Haaland’s aim was of the highest quality. It’s been his best for City yet, but even when it comes to acrobatics he remains king of the penalty area, whether at Dortmund or Manchester.

https://www.independent.co.uk/sport/football/manchester-city-erling-haaland-borussia-dortmund-champions-league-b2167475.html Erling Haaland did the inevitable, but in the most extraordinary way

Maggie O'Farrell: "We used to be asked by teachers if our parents were terrorists"