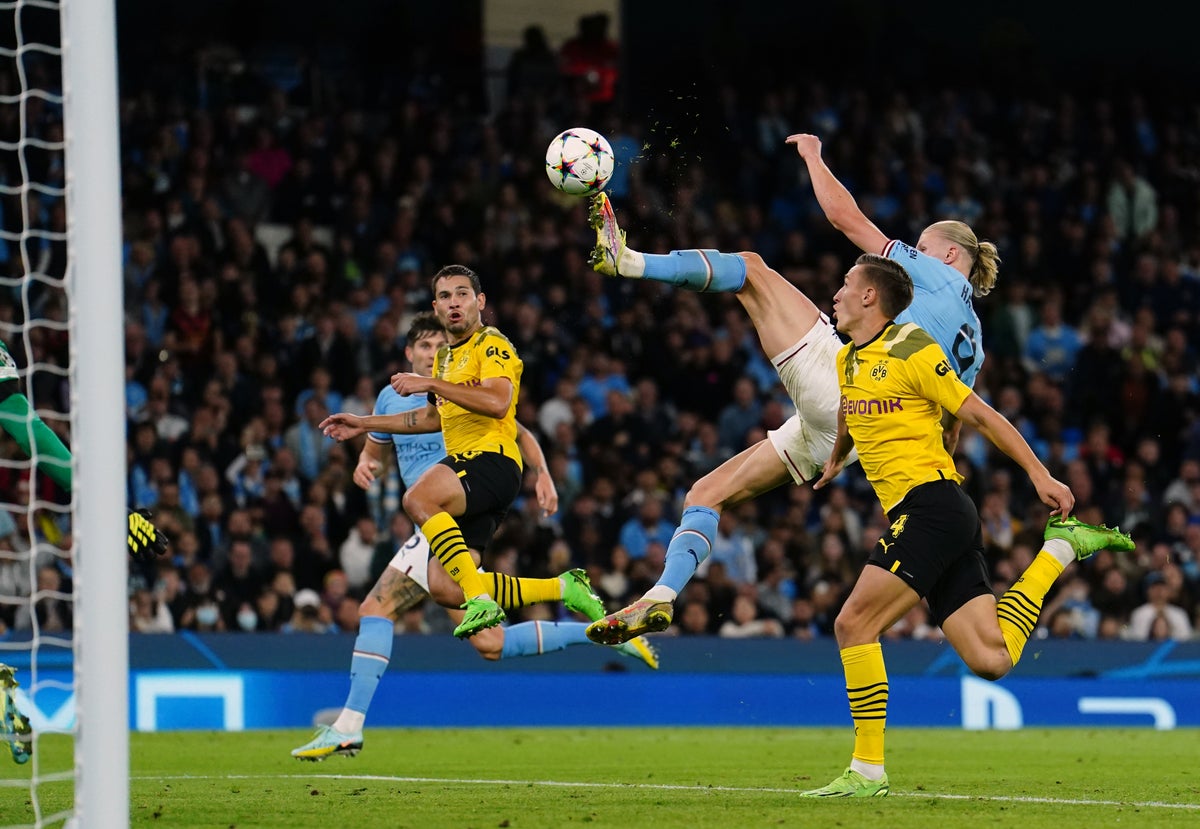 Erling Haaland feels he is “living the dream” and has promised more goals as his amazing start at Manchester City continues.

The prolific Norwegian scored for the 13th time in just nine City games in a stunning late volley win over his former club Borussia Dortmund in the Champions League on Wednesday.

His acrobatic performance from a Joao Cancelo cross in the 84th minute secured a 2-1 win at the Etihad Stadium and capped a fine late comeback from a long John Stones equalizer just before.

“I think I have very long legs, that’s why I got the ball, but I have to say it was a really good cross and a really good goal,” said the 22-year-old. “It’s quite nice. In the end I’m living the dream and I’m happy. There’s more to come!”

Until then, Haaland had been largely pacified by his former teammates in the Group G encounter.

After a dreary first half, Dortmund took the lead just before the hour with a well-placed header from the impressive Jude Bellingham.

City boss Pep Guardiola responded with a triple substitution and one of the fresh players, Phil Foden, immediately played on Haaland, who shaved the outside of a post.

The equalizer came 10 minutes from time when Stones, who kept pushing forward in his makeshift right-back role, risked his luck from distance.

After the momentum shifted, Haaland had the last word as he jumped and extended a leg to expertly lead Cancelo’s spot-on ball home.

Haaland toned down his celebrations out of respect for his former club and admitted it was a poignant moment.

“It was a special game for me, emotionally,” said Haaland, who scored 86 goals in 89 games for Dortmund before joining City for £51m this summer.

“But for me I had to focus, I had to be ready for the things I have to do against my former team. It’s a football game.

“Of course it was emotional, but it was a nice game.”

City defender Manuel Akanji, who followed Haaland from Dortmund to Manchester at the end of last month, also expects a lot more from the striker.

The Switzerland international said: “I’m no longer surprised at what he can do. I think he can score any kind of goal. What a cross from Joao and obviously he’s where he needs to be and it was a fantastic goal.

“I think he can go on like this. He just has to work hard, keep his head down and work every day.”

The result gave City a three-point lead over Dortmund at the top of the group ahead of back-to-back games against FC Copenhagen next month.

Akanji said, “It was a really big win. We set the tone that we are now leaders of this group, but the work doesn’t stop. We have to keep going.”

https://www.independent.co.uk/sport/football/erling-haaland-borussia-dortmund-norwegian-john-stones-champions-league-b2167923.html Erling Haaland ‘living the dream’ at Man City and warns ‘more is to come’