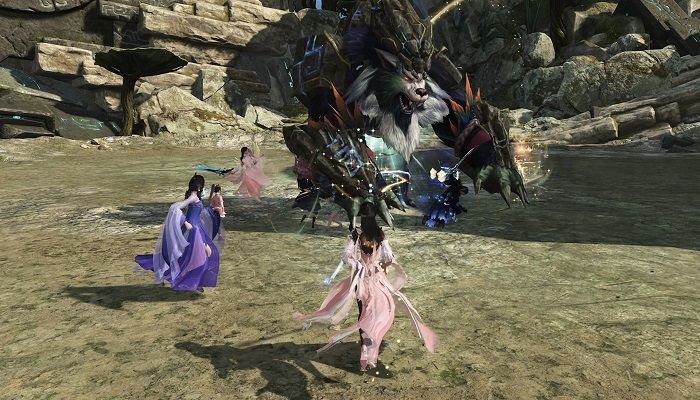 Swords of Legends Online will be further expanded The Firestone Legacy, featuring a brand new raid: Langquan Bridge. The new raid arrives today in both easy and normal modes along with some other changes in the update including the raid expedition.

The Langquan Bridge is the link to the Heavenly Gate Labyrinth, and it has a long history of being broken and forged, contested and conquered time and time again. Since the bridge leads to the immortal realm, there is always conflict. Now it’s your turn to take on the demon army blocking the Qin League and trying to break into the walls of Langquan.

The all-new raid resets weekly, with Normal mode going live with the update today and Easy mode coming on Sunday. Each of them will be reset on these days. Like the other raids in SOLO, this mode doesn’t drop progression items, it’s basically a training ground where you get a feel for the bosses. Easy mode has a recommended item level of 165, and you can score some collectibles, pet items, and gold if you bang your way through. If you unlock Normal mode first, you can take on this challenge if you’re prepared, with a recommended item level of 175 and no auto-matchmaking.

So what can you take home when you’re victorious? Normal mode will drop level 180 gear, Runestone II for PVE, Talisman II recipes, crafting recipes, and materials. But to get there, you’ll have to take on a series of challenging new bosses.

The bridge’s front guard is a stone spirit golem named Paiyun Guardian. His only job is to guard the bridge. The Blackstone Destroyer is a combined bear demon and one of the Blackstone’s troops. This created an incredibly strong warrior not to be underestimated. Blightbeast is a powerful beast summoned by Meijia to guard the demon army and protect them from opposition on their way to Langquan. Expect it to block the road and heavily guard the army and take them on. And finally, if you make it, you will face Haocang along with his forces. He directed the invasion effort. He is also responsible for capturing and experimenting on members of the Qin League who had already attempted to stop him and the invasion.

Also in the new update is a Raid Expedition, which involves accepting the new Raid’s easy mode and defeating the final boss to complete this weekly quest. There is also a world boss that has been added to Langquan Bridge: Cloudscape Zone to be a target for weekly quests. Storyline quests have also been adjusted.

For the full details, see patch notes for the update for this new one Swords of Legends Online mugged.

Pictures of a Tears of the Kingdom Switch model appear online