A WOMAN whose mother was diagnosed with dementia has described how quickly her condition changed.

Joanne Ford, of East Grinstead, says the symptoms of her mother, Sylvia’s condition, were not initially recognized because they did not match normal signs.

Sylvia, who worked for Barclay’s Bank before retiring, was diagnosed in 2021.

Joanne, 53, said: “My husband’s mother and sister died of dementia in 2019. Now my own mother is living with the disease following her diagnosis last year.

“I’ve seen a rapid change in her condition and now she doesn’t always remember who I am.

“We care for them full-time with the help of professional carers. There were signs that we didn’t immediately notice because unlike the symptoms you often hear about with dementia, Mom didn’t repeat itself.”

Joanne says looking back, there was a time when Sylvia, 85, called her and insisted she’d forgotten how to turn on the oven.

She said: “We put it down to her living with us during lockdown and not having to cook for a long time.

“She also went to the shops and forgot what to buy and ended up with loads of groceries in the fridge.”

Now, on October 1, Joanne is joining hundreds of others in Hove Lawns to take part in the Alzheimer’s Society’s Brighton Memory Walk.

She will attend the event with her boyfriend’s nine-year-old son, his father and her husband.

Joanne said: “It was our friend’s son who wanted to join the walk for my mum. I choked on hearing that.

“It’s heartwarming that someone so young would want to participate and raise funds.

“This will be our first Memory Walk and a beautiful opportunity for us to remember loved ones who are no longer with us. It will also raise money to help people like my mother who are now living with dementia, while also offering hope that treatment can be improved and a cure found in the future.

“The Alzheimer’s Society is very important to us and we try to support their amazing work as much as we can.

“We’re also hosting a benefit concert and farmers’ market at our local pub in September.”

The Alzheimer’s Society is encouraging people across Sussex to join Joanne this October. 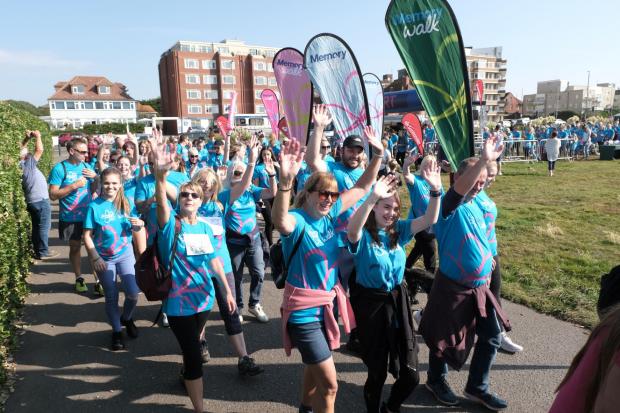 Brighton’s Memory Walk last year The Memory Walk is open to those personally affected by dementia, those who wish to walk to remember a loved one and people wishing to raise money for charity.

There are an estimated 26,500 people living with dementia in Sussex. Last year nearly 500 walkers and 40 volunteers helped make the Brighton event a success, raising £58,700.

“Too many people in the county are dealing with dementia alone without proper support.

“We urgently need to find a cure, improve care and offer help and understanding to those affected.

“We are in awe of our amazing fundraisers like Joanne who are doing everything they can to raise important funds and awareness for people living with dementia in Sussex.

“Every step our fundraisers take will help us provide a lifeline of support to as many people affected by dementia as possible.”

Visit memorywalk.org.uk to find out more.

https://www.theargus.co.uk/news/20848266.east-grinstead-woman-fundraising-following-mothers-dementia-diagnosis/?ref=rss Fundraising for an East Grinstead woman after her mother was diagnosed with dementia

Bognor theater and hotel plans are under review by the council