I haven’t played a 4x strategy game in a while, but I have fond memories of it Master of Orionthat civilization series and several other entries in this genre. When charging Galactic Civilizations IV (GC4) by Stardock Entertainment for the first time, my mind searched for a massive sci-fi experience filled with galactic exploration and conflict. I was pleasantly surprised by the range of races and the ability to customize my own. The downside is that after race selection and galaxy generation, there are a few elements that make this a mediocre experience so far.

When I started my first game, I found a good mix of 18 races, containing everything from terran to a synthetic race. Each has an interesting aesthetic and their racial ability/background only helps create a unique feel. During my first game as a new player, I initially chose the default Terran race and left all galaxy settings at their original defaults. 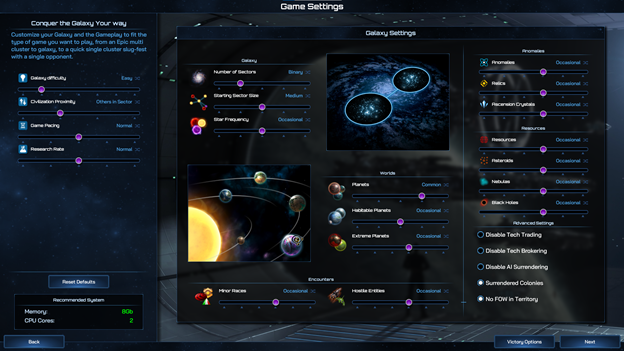 The theme music for each race is excellent and once I got going all the first elements prepared me to start exploring the stars. The game’s graphics are good and the interface is responsive as you move from one page to the next. It was easy to follow my advisors’ advice in the early rounds and colonize the next few planets.

After those first turns GC4 starts losing me There’s no in-game tutorial for onboarding new players, so it’s easy to get overwhelmed. Depending on the galaxy settings, it can also quickly come into contact with other races.

The early contact with races creates a second problem where much of the early game is land grabbing. If a player doesn’t get a large enough region of control with multiple planets, things can get much more difficult for the rest of the game. Although I’m used to this in this genre, GC4 feels like it’s taken to the next level unless you change the galaxy settings. The official website has a written walkthrough that was a great help to get started and understand different systems. I don’t understand why this wasn’t part of an in-game tutorial.

The UI isn’t too difficult to navigate and is decently responsive, but it feels at odds with the rest of the graphics and looks a bit dated in my opinion. Different screens can throw a lot of information at a player when hovering over different elements, which can be a plus. But the information provided is sometimes not particularly clear or not useful.

During my first two games, there were instances where I only found out I needed other resources or researched technologies after attempting an action. An example of this is when another race declared war and I tried to attack their core world. It just indicated that I needed to research a certain technology for accessing attack transports before I could attack a core world after deploying a fleet. This left one of my fleets out of position unless I was reloading a previous save and meant that due to the way the game handles research it could take some time to access the required tech.

Each time a player has discovered a new technology, they can select one of four (five with an assigned Technology Minister) random technology from the currently unlocked options in different technology trees. In my situation I had to try to figure out what technologies would ultimately open the one I needed and hope I got lucky with RNG along the way. It didn’t help that when accessing the tech trees in the UI to plan things, I could only see a small portion of each and had to scroll left/right to find what I was looking for.

So far, going to war with another race doesn’t feel good. It only contributes to micromanagement each turn as the enemy AI appears to be randomly attacking planets. It’s boring, I’m tempted to focus on a high diplomacy race for my next game. It also doesn’t help that smaller ships/probes are hard to spot on the map unless you’re constantly zooming in/out to find their icons. Suddenly, a fighter can appear and bombard a colony behind your front line.

There are a few other elements that I’m still concerned about and that I’m keeping a close eye on. As I progress into the gameplay, I become more and more aware of the lack of a coherent campaign and story. That’s fine when the random events can create consistently engaging moments, but they’re already starting to feel redundant. I’m also worried about the enemy AI, especially when it comes to going to war with the other races.

In terms of stability, I didn’t have a single crash and the load times were decently fast. So far I’ve only noticed two minor technical problems. The first is that sometimes a newly constructed ship doesn’t immediately appear in my ship list until I move it or end my turn. Second, when I click to move a ship and it’s partially off-screen, it “jumps” through a portion of the movement that appears at its destination.

So far there are a few features that have improved my gaming experience. I’ve started using the custom races option and it’s nice that you can make a copy of an existing race and then customize it to suit your playstyle. Using slipstream travel to connect different sectors of space is interesting and leads to some challenging strategic decisions even in my first few games. I like that I only have to manage my core world in one system while the other small colonies feed the world’s main resources. The custom ship design system looks interesting too and I can’t wait to tinker with it more.

Although it hasn’t been an amazing experience so far, the game’s bones are good and I’m having fun with it Galactic Civilizations IV. As my time with the game continues, I’m curious if I’ll eventually get up late at night to play just one more round like so many other 4x games have done in the past. He has already done one thing. My interest in the genre was renewed.

A conversation with Gordon Midwood, co-founder of the AI ​​3D Content Creation Platform: Anything World