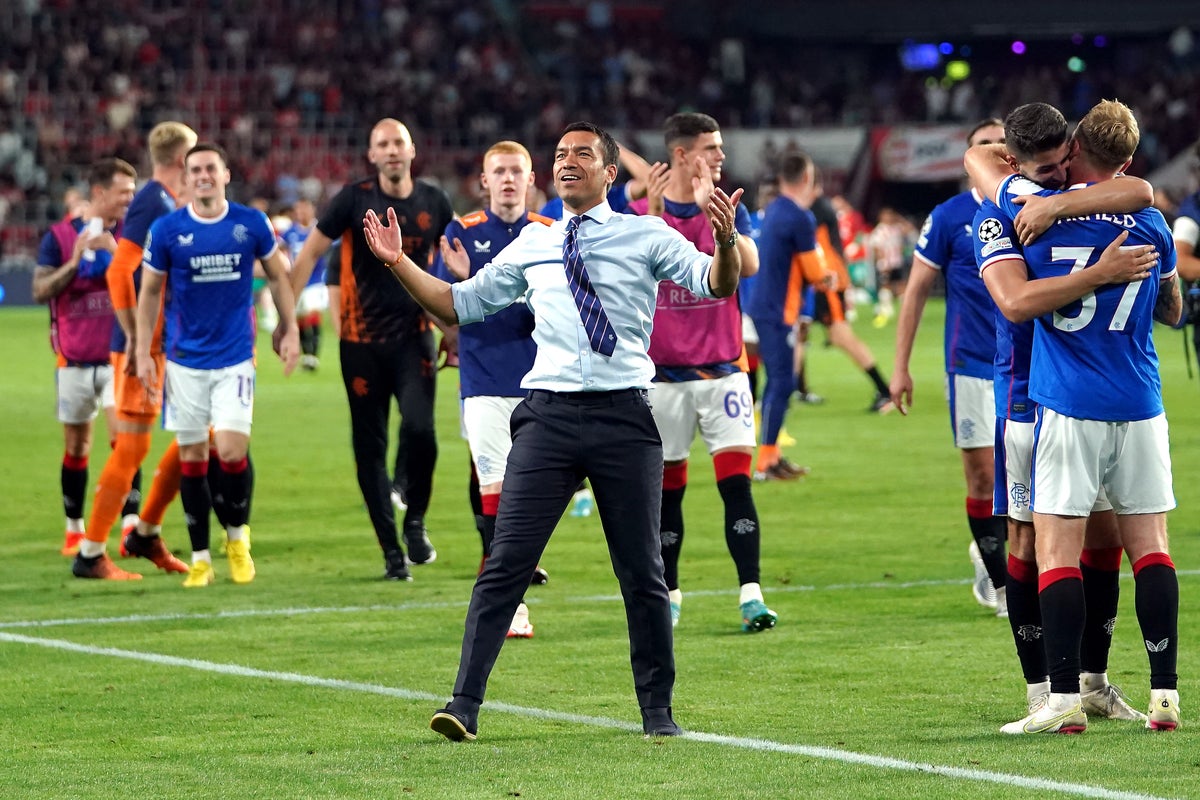 Giovanni van Bronckhorst showed his pride after Rangers beat PSV Eindhoven 1-0 to reach the Champions League for the first time in 12 years.

After a 2-2 draw against the Dutch in the first leg of the play-offs at Ibrox last week, another riveting encounter was decided at the Philips Stadion when Antonio Colak scored a 3-2 aggregate victory on the hour mark .

The Rangers boss said: “It’s a very proud moment. I know what it means for the fans and for the club to play at the highest level in Europe and compete with the best teams.

“I think it’s a proud moment for all of us.

“I’ve played a lot of games as a player, coached my team Feyenoord in the Champions League and now I have the opportunity to experience it with Rangers so it’s a very proud moment.”

The Dutchman noted that Rangers resurfaced in 2012 after a financial meltdown and fought their way back to the Europa League final last season, where they lost on penalties to Eintracht Frankfurt in Seville – and now back to the Champions League for the first time since 2010.

The former Rangers player said: “You know where the club comes from, 10 years ago we were at the lowest point in history.

“And it has taken really hard work from everyone involved to get the club back to the level we are at now. So it’s a proud moment for me to thank all the people who put so much energy and time into rebuilding this club.

“Seville was a proud moment for us to try to win the second European trophy in the club’s history and we have the same moment to be in the Champions League draw and face the best teams in Europe. “

Van Bronckhorst had controversially left Alfredo Morelos out of his squad due to his fitness and attitude, but he offered the Colombian striker an olive branch.

He said: “Morelos also qualified for the Champions League.

“I think he’s also proud of his teammates and club qualifying for the biggest competition in the world.

“He’s still a Rangers player and I’ll be pushing him as much as I can to get him fit and get back the Morelos that we all want.”

Malik Tillman, who lined up Colak for the winner, told BT Sport: “It feels great.

“Everyone wanted to be in the Champions League and we did it today and it’s an amazing feeling.

“We worked together as a team, trying to score and defend as best we could, it was very important not to concede a goal. We did our best and got the win in the end.

“I can’t wait to play in the Champions League. I look forward to it.

“12 years ago the club were in the Champions League so I think everyone is a little bit excited to be back and we will try to do our best and go as far as we can.”

Everything we know about the latest A24 horror movie