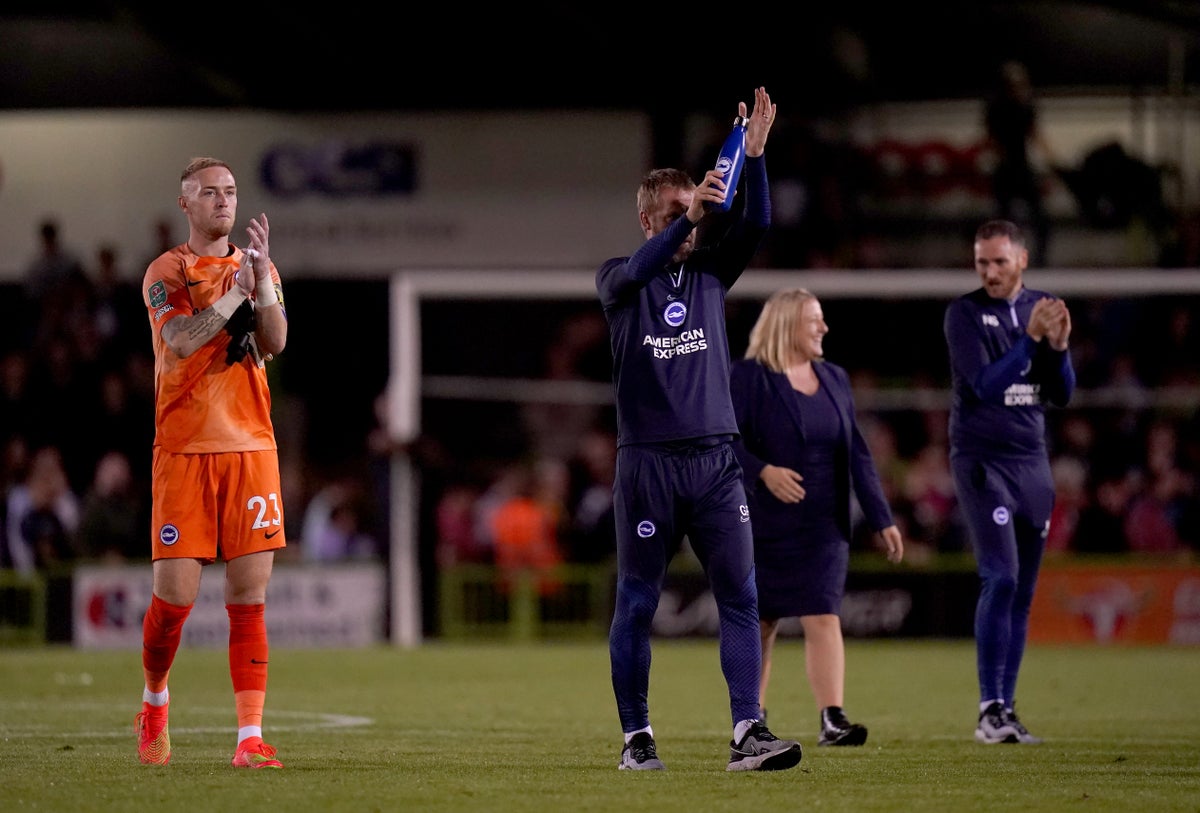 Graham Potter said it was done after Brighton and Hove Albion won at Forest Green.

Deniz Undav, Steven Alzate and Evan Ferguson sealed a 3-0 win to secure a Carabao Cup third round draw at Arsenal in November.

Potter made 11 changes from Sunday’s 2-0 win at West Ham – giving Undav and Levi Colwill first starts – and they were set up by their League One hosts.

Jason Steele thwarted Josh March and Kyle McAllister, but two goals in seven minutes of the first half at the New Lawn ultimately won the tie for the Seagulls.

Potter said: “I wouldn’t say it was comfortable, the score looks like it, but the game was a close game. Credit to Forest Green, they played well in the second half and pushed us back.

“If Forest Green scored (early in the second half) it would have made it a lot harder for us. We had a chance to make it 3-0 a little earlier with Deniz, if we score we’ll end, but we’re happy.

“At the time we are in London with the game on Sunday some of these guys need some playing time otherwise it’s really unfair for them to go to the Premier League after not playing for five or six weeks. ”

Undav hit the post with a clean flick from Julio Enciso’s corner after 27 minutes, but Brighton seldom looked like he would break collected Rovers.

It took them 38 minutes to find a breakthrough when Undav first got in behind to shoot past Luke McGee.

Then, in first-half injury time, Alzate scored his first goal in 18 months when he drilled into the bottom corner from 20 yards.

It was tough for Rovers and they were close to retiring a goal when Steele March denied just after the break.

Undav headed an excellent chance wide of the target shortly after and Steele saved from McAllister with four minutes to go.

Ferguson then added a third in added time when he pushed the ball past McGee from close range.

Rovers boss Ian Burchnall, who replaced Potter at Ostersunds in 2018, said: “I hope Graham might even say that the last goal flattered them a bit given our performance in the second half.

“We started at the front but then got a little lost and showed them too much respect. The second goal was killer, if we went in when it was 1-0 we had a chance.

“In the second half we played really well and created two or three really good chances. It’s always tough when you don’t score that goal and the longer the game goes on the more prone they are to a goal like they got in the end.”

https://www.independent.co.uk/sport/football/graham-potter-steven-alzate-carabao-cup-brighton-arsenal-b2152104.html Graham Potter satisfied as Brighton advance to the third round with a win at Forest Green

Everything we know about the latest A24 horror movie

Midhurst man shortlisted for Weather Photographer of the Year