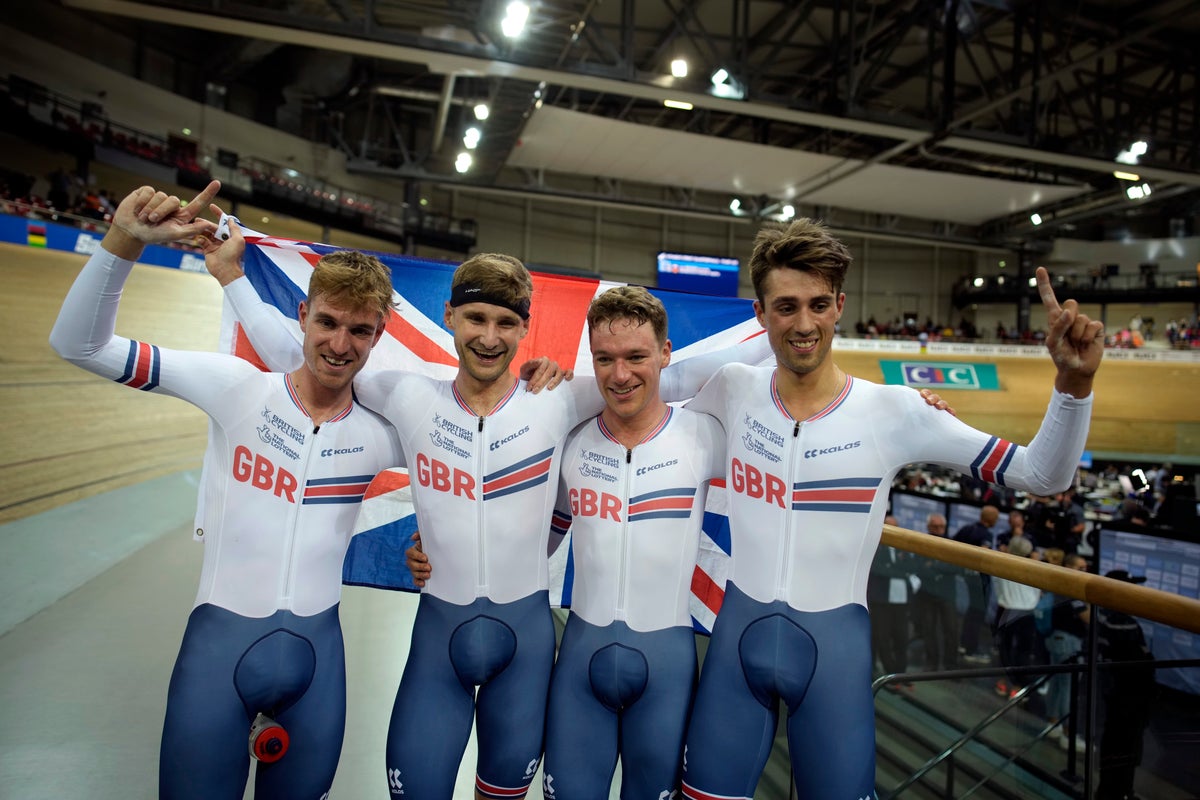 Great Britain took gold in the men’s team pursuit at the UCI Track World Championships in Saint-Quentin-en-Yvelines in a night of two medals.

Her compatriots in the women’s final, who also faced strong Italian challengers, finally settled with silver on day two of the five-day event.

Wood, Hayter, Vernon and Bigham were the fastest from Wednesday’s qualifying session despite only having one session with all four members ahead of the competition.

They came together when it mattered and finished 0.204 seconds ahead of their opponents.

Bigham told the BBC: “I can’t put it into words. Honestly, it’s incredible.

“We obviously wanted to perform well here and really focused on just doing good, clean rides and just drilling that into ourselves.

“It’s not about being here to win, it’s about doing everything we can to do our best and just get the maximum performance out of it. And I think little by little, every single lap, we’ve progressed and really improved.

“And this one, I think it was the best we had, period. It was really a clean, solid ride and I think we’re all absolutely on cloud nine.”

Great Britain had a 0.403 second lead after the first 1,000m, but the Italian team of Filippo Ganna, Simone Consonni, Jonathan Milan and Manlio Moro almost halved that lead by the last lap.

Ganna, who set a new world hour record on Saturday, showed a late climb but ultimately failed to close the gap as Great Britain took gold in 3:46.

Derby-based Bigham, who held the hour record for just under two months until it was broken by his INEOS Grenadiers team-mate Ganna, said his British team had moved from Manchester to the “People’s Republic of Derb-ados” in recent weeks.

He later explained how the world title also gave the foursome a confidence boost in preparation for Paris 2024 after finishing a disappointing seventh place in Tokyo.

He added: “I think we all have unfinished business with the Olympics and sitting here, less than two years before (Paris) in the same velodrome, I think the pressure is off performance-wise and we can really focus now just get into the process and basically master it as a team for the next 20-something months.”

Britain’s Anna Morris, Neah Evans, Katie Archibald and Josie Knight came just short in their own team pursuit final against Italy, who were more than a second ahead after the first kilometer.

Italy pushed even further and crossed the finish line in 4:10, 1.609 seconds ahead of Britain.

Her silver in the evening’s final event was the fifth medal for Great Britain in the competition so far, after the team won three bronze medals on Wednesday.

Scottish cyclist Jack Carlin had no chance to fight for a medal after finishing sixth of six in the second of two keirin heats in the men’s semifinals.

Sophie Lewis finished sixth in the women’s elimination race while Rhys Britton settled for 14th in the men’s and Sophie Capewell was eliminated in the quarterfinals of her sprint by France’s Mathilde Gros.

https://www.independent.co.uk/sport/cycling/great-britain-dan-bigham-italy-france-paris-b2202477.html Great Britain wins gold in the men’s team pursuit at the Track World Championships ahead of Italy

Chelsea and Brighton strike deals with Cucurella and Colwill

US Males’s Hockey Group Takes on Slovakia in Quarterfinal Recreation