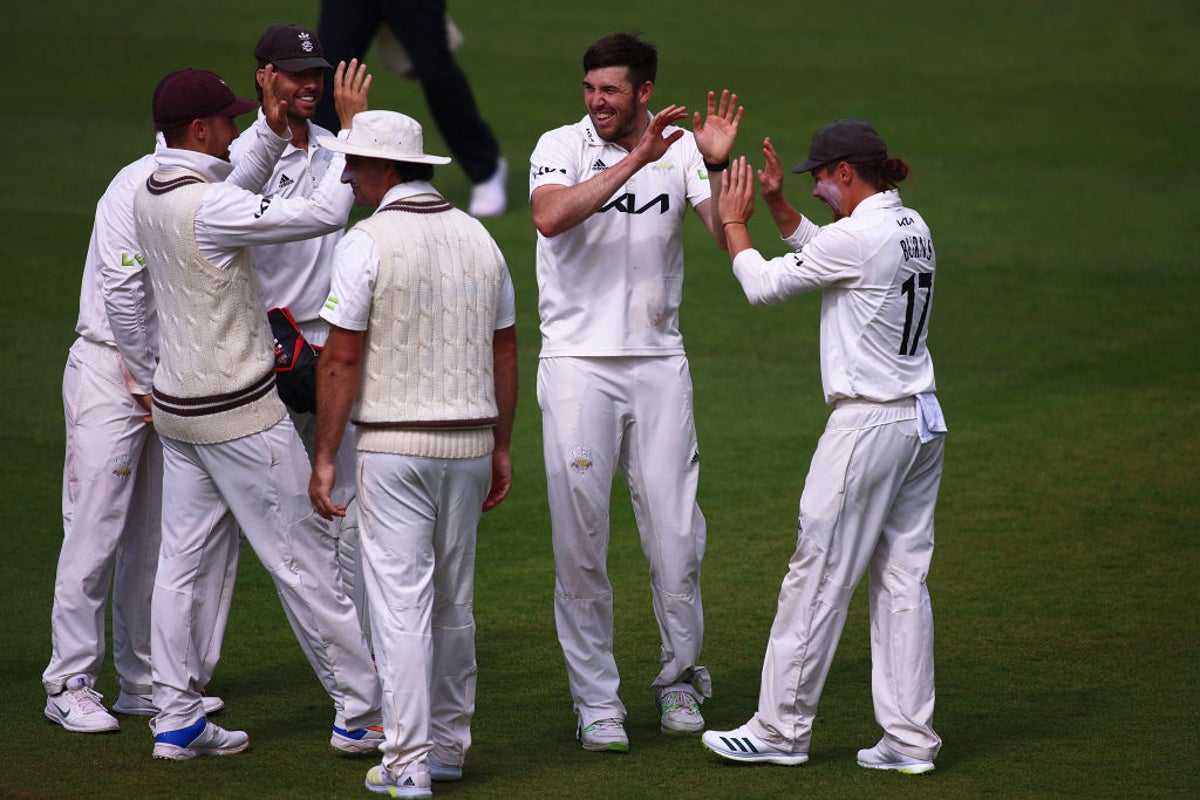 Hashim Amla pulled County Championship Division One leaders Surrey out of trouble after they plunged to 80 for four in response to Northamptonshire’s 339 all-out.

Stumbling blocks on day two saw the ex-South Africa captain near a 57th first-class century, with his 97 not out and a 115-run streak alongside Cameron Steel (48) who helped Surrey close to 224 for five .

Earlier at Wantage Road, Northamptonshire lost their last five wickets for the addition of 46 runs with Rob Keogh, the penultimate man, out for 123 after trailing day one centurion Emilio Gay by three digits.

West Indies sailor Kemar Roach finished the game five for 95 before Surrey found themselves in a hole with the racquet and while Amla and Steel recovered the visitors remain 115 behind their opponents overnight.

Dan Lawrence’s 61 and 46 after Shane Snater’s turn lifted Essex to 225 and a 91 lead in the first innings against Yorkshire, who finished with 87 for two and four back at Headingley.

Lawrence, who made the last of his 11 England Test appearances in the Caribbean in March, registered the first half-century in the affair with low points in a patient 145-ball innings.

Jordan Thompson was the Yorkshire bowlers’ choice with four for 60, while Sam Cook and Jamie Porter each had a wicket, with Fin Bean not missing on Wednesday morning at 41.

Fourteen wickets fell in one day at Edgbaston where Jack Brooks post-tee burst gave Somerset a narrow advantage against Warwickshire.

After Somerset went out with 219, the Bears reached 141 for four, but Brooks tossed Jayant Yadav and Michael Burgess in the same over before trapping Sam Hain, top scorer for 67, and Henry Brookes.

Warwickshire was out for 196, but Somerset slipped to 13 for two in his second innings, with one wicket each for fast Indian bowler Mohammed Siraj and his compatriot Yadav.

In Division Two, fast English bowler Matthew Potts picked up six for 52 while Leicestershire was sacked for 202 before Durham reached 239 for five at Grace Road.

Durham opener Michael Jones was dismissed three short of his ton by Leicestershire captain Callum Parkinson, who also counted opponent Scott Borthwick for 30 in his three for 45.

Mark Stoneman’s best 128 of the season, which saw him share a 134-run streak with John Simpson (72 not out), lifted Middlesex to 286 for five and a 72 lead over Glamorgan at Lord’s.

Rain showers meant only 45.1 overs of the game were possible but Middlesex still overtook Glamorgan’s 214 in full.

The bad weather meant there were just 50 overs at Hove, where Worcestershire improved their overnight 87 unbeaten run to 289 for two thanks to Jake Libby’s unbeaten 142 and Ed Pollock’s 98 and a 69 lead over Sussex, all on Monday for 220 .

Look back to how comedian Volodymyr Zelenskyy became President of Ukraine