HUNDREDS of school children enjoyed a few days of fun in blue and white as part of a charity fundraiser.

The Blue and White Week organized by Albion in the Community (AITC) was attended by people who went to work or school last week in their favorite Albion jersey or in the colors blue and white.

The charity encouraged people to sign up for their “Community Champion” program, a monthly donation that helps support their work to “use the power of football to engage young people”.

More than 200 people have signed up for the scheme, which will help pay for coaches and equipment used to help people with various disabilities access football. 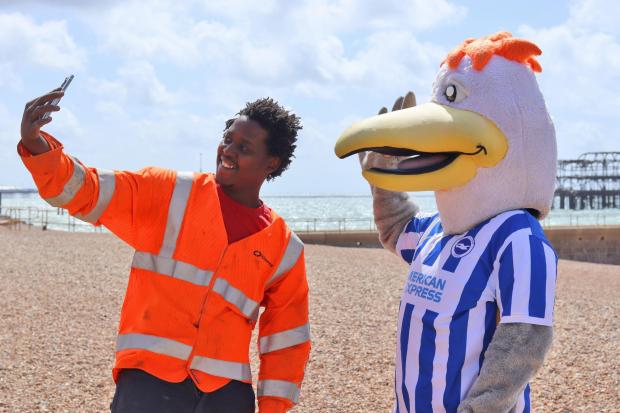 Matt Dorn, CEO of AITC: “We all had a great time during Blue and White Week and it was great to see so many people getting involved in the celebrations.

“Gully the Brighton and mascot Hove Albion made their way across Sussex, schools and businesses took part by dressing up in blue and white and we had a fantastic social media campaign. It was a really lively week and a great success.

“Over the course of the week we had a huge push to sign up more community champions and we now have over 200 which is an incredible amount of support for us.”

Martin Perry, former CEO of Albion and current Chairman of the Board of Trustees, told The Argus about the charity’s work.

He said: “Football is very powerful, the simple vision behind AITC was if a player helped a kid with math or English they would get involved. It’s the fact that we can use the power of football to engage and interest young people.

“We built it on that philosophy and it just grew and grew.”

“We need to raise funds to provide the trainers and coaches with the expertise to deliver this service.”

Visit the Albion Community website for more information on the Community Champion program.