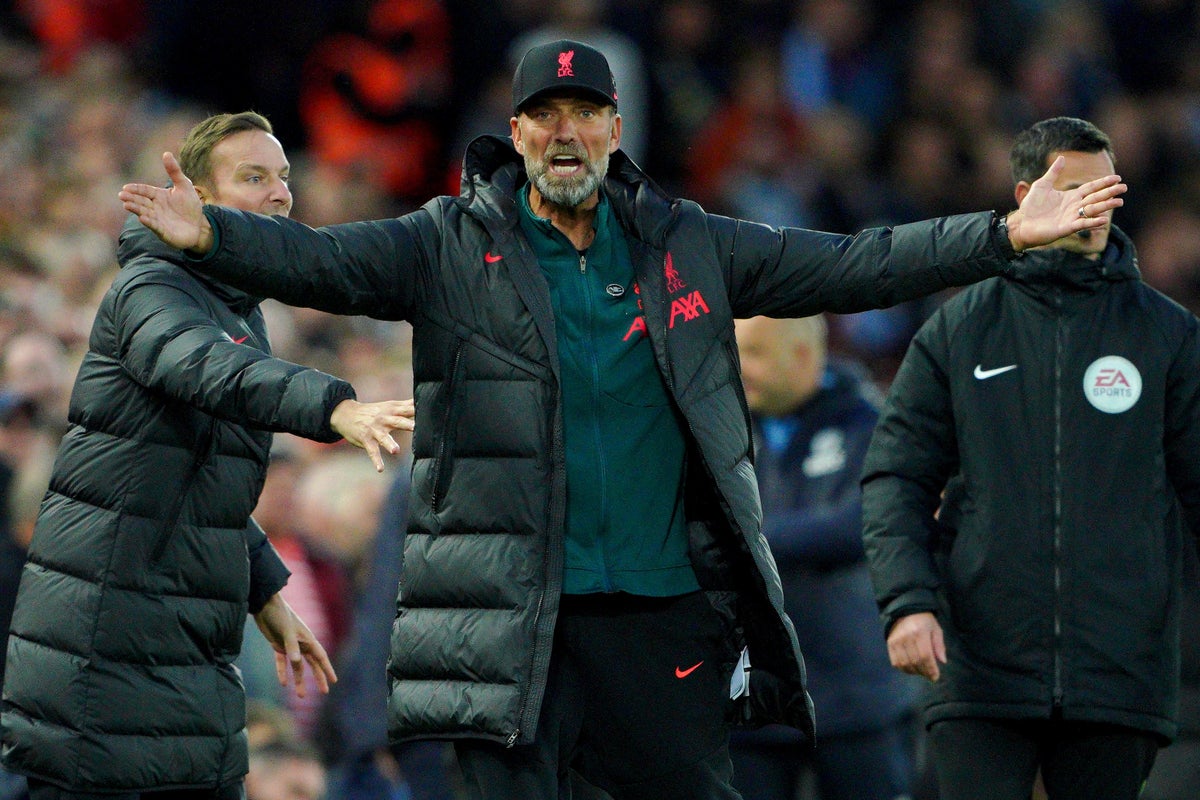 Liverpool manager Jurgen Klopp accepted he was “overdone” and “lost” so he fully deserved his red card in his side’s 1-0 win over Manchester City.

The Reds boss was furious that referee Anthony Taylor had not given goalscorer Mohamed Salah a foul from Bernardo Silva late in the game, but his anger, which was also directed at the assistant referee who was yards from the incident, led to that he was sent off the sidelines.

Anfield’s technical area was a fiery place and City boss Pep Guardiola was appalled that Phil Foden’s earlier goal had been canceled out by Taylor after VAR advised him to close the field monitor for a foul by Erling Haaland on Fabinho see.

What Klopp told officers remains unclear but it was enough to see him fired immediately.

“The red card was my fault. I overdid it at the moment but I don’t think I was disrespectful to anyone,” said the Reds manager.

“If you look at the pictures on the back, even at 55, I know how I look in those moments is worth a red card.

“I lost it in that moment and that’s not okay, but it’s a bit of an excuse. I want to mention how not to whistle this foul? How on earth is that possible?”

Taylor had given players a sort of free hand in the game by trying to play advantage as often as he could, but occasionally that was the wrong decision in a high-tempo, high-stakes game.

“I’ve now heard people say it was Anfield that made the VAR decision,” added Klopp.

“Anfield didn’t have a chance to make a difference with a foul on Mo. It’s a foul on Fabinho (in front of Foden’s goal), I think we agree on that. Isn’t it enough to bring someone down?

“Then Ali (goalkeeper Alisson Becker) has his hand on the ball (before Haaland frees it), so that’s a save as I understand it.

“So there was already the first moment where Pep and I were quite animated, but actually for the same reason, to be 100 percent honest.

“We didn’t argue with each other, not at all. Then this situation (with Salah) I just had the perfect sight and linesman and you can imagine us leading 1-0 and having a free kick or a counterattack there.

“That’s pretty much a 100 per cent difference and that’s when I snapped and again I’m not proud of it but it happened.”

The win was a much-needed shot in the arm for Liverpool’s confidence and their unpredictable season so far.

They were generally weak defensively but found the resilience needed to stop a City side who had previously won 10 and drawn three of their competitive games after losing to Liverpool in the FA Community Shield.

“You have to play to your limits and keep going, that’s what we did,” added Klopp. “We were super organized, but defended very passionately, closed the right gaps, challenged in the right places.

“But they still get through. They still get to the touchline, they still have an incredible amount of players in the box and the way we defended the box, and the six yards in particular, was absolutely exceptional because I think we all know City do the square Pass and one (player) is free in front of the goal.

“It was a top performance from all the guys and that’s why we were able to win.”

Guardiola was also unhappy with Taylor’s performance but did not use that as an excuse for the first competitive loss of the season.

“The referee spoke to my assistant and Jurgen and said he would not commit fouls unless it was clear. The whole game was ‘keep playing’ and ‘keep playing’ – except for the goal we scored,” said Guardiola.

“Then after it wasn’t ‘keep playing.’ The referee can decide to call all actions, but he decided against it, then he did it.

“But we didn’t lose the game for that. Nobody knows what would have happened, but it was a moment where we had momentum and control. After we lost due to a mistake.

“We didn’t follow the transition when Alisson played fast, Joao (Cancelo) lost the duel and then it’s always difficult with Salah.

“We have to learn that for the future. But the way we played, the performance and the courage was fantastic.

“They scream, you have to scream more. You run, you have to run more. There is no other way to manage it in this stadium.

“We did that, but football is football.”

https://www.independent.co.uk/sport/football/anthony-taylor-jurgen-klopp-mohamed-salah-referee-premier-league-b2203973.html I overdid it at the moment – Jurgen Klopp admits he deserved the red card