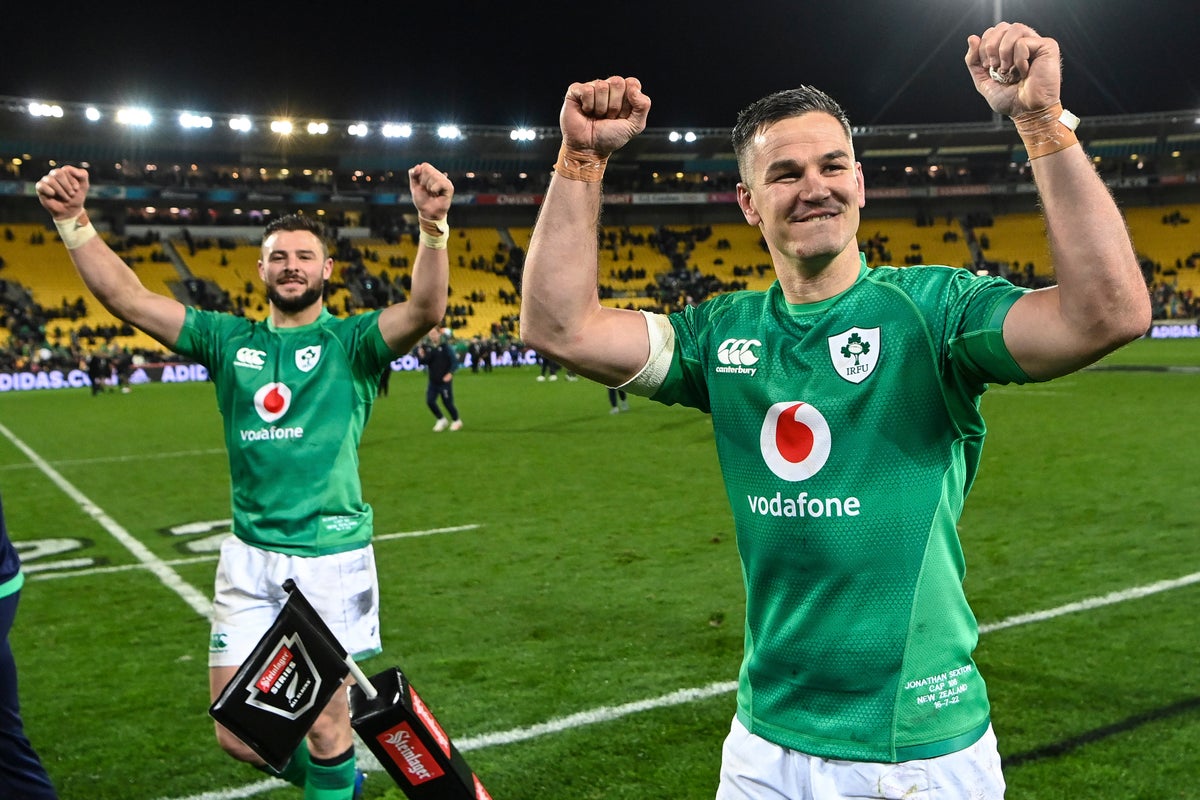 Captain Johnny Sexton has warned Ireland against complacency ahead of next year’s Rugby World Cup after a momentous series win in New Zealand.

Andy Farrell’s men underscored their qualification for France 2023 by clinching a historic tour victory against the All Blacks thanks to Saturday’s vibrant 32-22 victory in Wellington.

Sexton, who topped 1,000 career points for his country in the Test decision, has repeatedly said the Irish must not repeat previous mistakes by peaking too soon for a World Cup.

But the influential half also stressed his side could not afford to slack off before trying to be at their best when it mattered.

After a summer break, the Irish players will meet world champions South Africa, Fiji and Australia in Dublin in the autumn before preparing for another Six Nations title shot.

“We have a full season ahead of us and it shouldn’t be ‘beat New Zealand and wait for the World Cup,'” said Sexton.

“There’s a lot more to play. There are big home games in November, there is a Six Nations where we haven’t achieved what we want to achieve yet.

“We won a Triple Crown this year but a championship or better would be something we’re aiming for so there’s no reason why we shouldn’t try to make progress and do that.

“It’s very Irish to think ‘oh, we’ve got to take it easy now until the World Cup’. No, let’s make the best of it, let’s keep getting better.”

Sexton scored 12 crucial points at the Sky Stadium as Ireland, who lost their opener in Auckland before equalizing in Dunedin, managed a remarkable turnaround in the series to rise to the top of the world rankings.

That made him only the second man to reach four figures in the green jersey, after Ronan O’Gara, the number 10’s former rival.

The Leinster veteran is aware of the responsibility he has in maintaining the standards going forward.

“That has to be driven by me as captain and the rest of the leading group,” continued Sexton, who celebrated his 37th birthday earlier this week.

“To show up, to show the right attitude in September when we play for our provinces again. Just keep getting better, that’s the key.”

Sexton, the 2018 World Player of the Year, counted defeating the All Blacks on New Zealand soil as one of the finest moments of his distinguished career.

Following the landmark series, he is keen to preserve the future of three-Test tours amid ongoing discussions about possible changes to the international calendar.

“Every time you play for Ireland it’s incredibly special and doing something no team has ever done before… will we ever get the chance to play three Tests in New Zealand again? I’m not sure.

“If that World League idea comes up, we’re going to play a test all over the store, but I think the three-test series is special and that’s proven by this game. It would be a shame to get rid of her.”

https://www.independent.co.uk/sport/rugby/rugby-union/johnny-sexton-ireland-all-blacks-irish-france-b2124993.html Johnny Sexton urges Ireland to move on after All Blacks fall

How Boris Johnson airbrushed the truth

The throw-in: The dubs are down, Leinster’s weakness and Waterford on the verge of something special