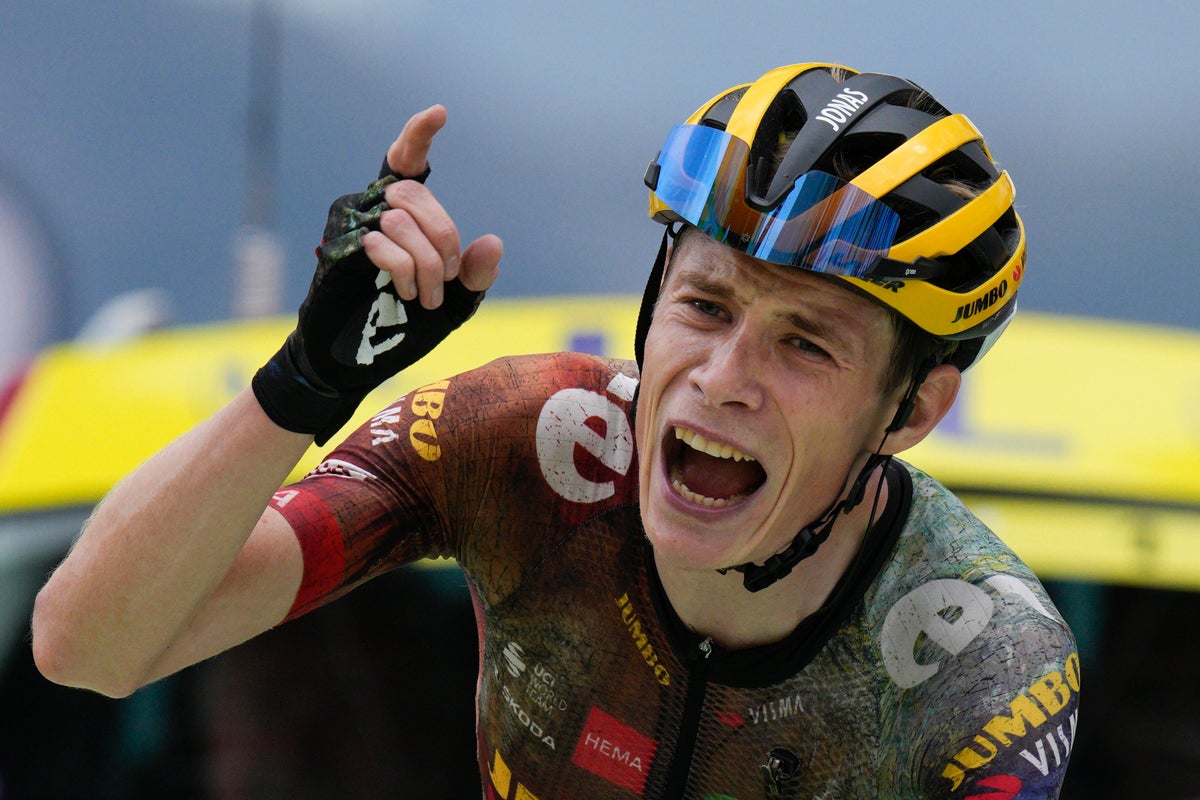 The 109th Tour de France came to life on an epic day in the Alps as Tadej Pogacar cracked and Jonas Vingegaard rode his way into the yellow jersey.

Vingegaard’s jumbo Visma squad worked to isolate and weaken Pogacar on a grueling Stage 11 from Albertville that included the climbs of the Telegraphe and Galibier before a summit finish on the Col du Granon and they were rewarded as Pogacar nearly three lost minutes.

The Slovenian had looked confident up to this point in the race and was threatening to make a third straight title a procession and was seen smiling and gesturing for the cameras as they approached the base of the Granon after he seemingly dealt with the worst rivals throw at the Galibier.

But less than 10km later everything had changed – Pogacar agonizingly struggled up the double-digit climbs while others pulled away.

Vingegaard finished second to Pogacar on last year’s Tour after being pushed into a leadership role by teammate Primoz Roglic following the fall.

The Dane came to this year’s race as a protected rider before another crash for Roglic put him on Jumbo-Visma’s ‘Plan A’ and the 25-year-old certainly rides like a man worthy of the role.

“I think it’s really incredible,” he said. “It’s hard for me to put it into words. I’ve always dreamed of this. A Tour stage and now the yellow jersey.

“We made a plan from the start and I think you could see what the plan was. We made it a super tough race.”

This was only the second time the Granon had appeared at the Tour, although its place in the history of the race was secure as Greg LeMond received a yellow here from Frenchman Bernard Hinault in 1986 – the five-time winner never wore it again.

That phase too will take its place in the annals as Jumbo-Visma delivered a tactical masterclass and Pogacar broke apart in a way unseen in the 23-year-old’s short but brilliant career.

The fireworks were set off early with Roglic serving as bait – he launched attacks on the Telegraphe to test Pogacar’s Covid-hit UAE Team Emirates squad.

At the foot of the Galibier, Pogacar remained isolated alongside Vingegaard and Roglic, with only Thomas able to keep up with the main group of favourites. The Jumbo-Visma pair took turns launching attacks, forcing Pogacar to react while Thomas set the pace to stay in touch.

Things regrouped on the long descent from the back of the Galibier and it seemed like normal service had resumed as Rafal Majka Pogacar paced up the early climbs. But when Vingegaard attacked again, Pogacar had no answer as one by one rivals rode away.

Nairo Quintana was second for the day but Romain Bardet was the other big winner as his third place put him second overall, two minutes and 16 seconds back.

Thomas finished fourth on the stage and is now fourth overall, four seconds behind Pogacar, two minutes back and 26 on yellow.

On Thursday, the peloton returns via the Galibier before tackling the Col de la Croix de Fer and a finish at Alpe d’Huez, where it will be seen if this was a bad day for Pogacar or a sign for the future .

“I was attacked by Jumbo-Visma, they played well today,” he said. “They did a really good job tactically. It was difficult on the last climb. But we’ll see tomorrow, I want revenge. Le Tour is not over yet.”

Al Porter breaks the silence: 'I was an idiot. I let people down," the comedian said in a statement that he's been "sober for a long time" and wants to get people laughing again

Hoops win shows the importance of the bench – Dylan Watts