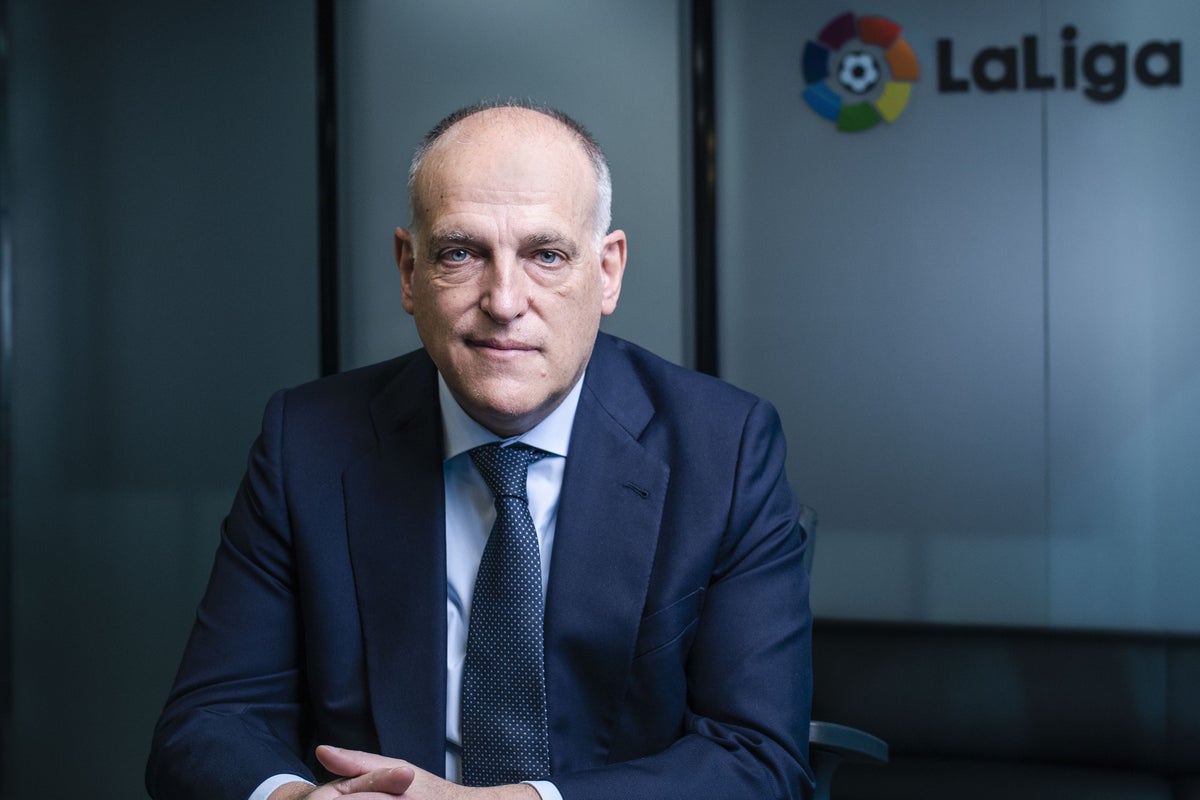 LaLiga president Javier Tebas has maintained his opposition to the failed European Super League, accusing the company behind the project of trying to “act like lambs, but they are actually wolves”.

Tebas was at the Web Summit in Lisbon on Wednesday, where the new Managing Director of A22 Sports Management, Bernd Reichart, was also present.

Reichart was hired last month by the organization behind the Breakaway League, which launched in April last year, only to collapse within days of strong fan opposition.

Tebas told the PA news agency: “I will not meet with him. I was not asked to meet with him, nor am I interested in meeting with him.”

The Spaniard insisted he was aware of the breakaway league’s plans.

Long-time LaLiga president Tebas believes the project, which now has only Real Madrid, Barcelona and Juventus involved, will introduce a tiered system of promotion and relegation, with a certain number of clubs ending up in an elite competition would remain each season.

A similar proposal was recommended by the European Club Association and UEFA in 2019 but was largely rejected.

“A year ago in April there were obviously a lot more clubs and now there are only three,” said Tebas.

“Now you have some federations and countries that have passed rules against the Super League so anything they propose has to be different.

“What they are proposing is the same as what was jointly proposed by UEFA and ECA in 2019. Sure, they’ll be saying that in a few weeks, but we already know because they aren’t.

“The same model has already been rejected by European football – including UEFA and ECA. I hope to waste very little time on this new model they propose.

“It looks like they’re putting on a lamb’s skin to look nicer and friendlier, but they’re actually just as dangerous and will do equally harm to European football.

“Now they may look like lambs, but they are actually wolves. The same wolves as before.”

Like Tebas, Reichart from A22 was a speaker at the Web Summit on the SportsTrade stage.

During a talk titled ‘Football can do better: An open dialogue on the future of European club competition’, the German revealed that a new name would be adopted for the next version of the failed Super League project.

He said: “It’s very much alive, I’m happy to say that, even if others insist on a different version of the story. We’re back with the ambition to make club football better.

“I’m not sure if it’s called the Super League but we want to put clubs in a position where they have control of a European club competition and we want them all to decide a format together.

“I said the first reasonable tick might be 2024 because that’s when the new Champions League format would also arrive, which I don’t particularly like.

“That being said, we are taking it step by step and have just started to engage in dialogue, we continue to reach out to stakeholders and it’s an ambitious goal but worth fighting for and I’m really motivated , to do that.”

Reichart reiterated that the new project would not involve permanent membership and revealed that he awaits talks with UEFA after the governing body of European football last month replied to a letter from the new A22 chief that he was planning a meeting in would consider.

He added: “Why hate someone who says I want to talk?

“In fact, we sent a letter to UEFA explaining why we want to meet. They’ve confirmed that and sent back an invite, so I’ll be sitting down with them soon as well.

“Both positions are clear and we have the court case (European Court of Justice) (on December 15) which is somewhat overshadowing relations, but I think it’s good for clubs to also see that dialogue is possible, although some clubs are still backing down.”

Reichart concludes: “If I can talk to UEFA, I should be able to talk to any club, right?”

https://www.independent.co.uk/sport/football/javier-tebas-european-super-league-lisbon-uefa-juventus-b2216402.html LaLiga president not interested in meeting with European Super League board

Just when you thought Andor's royal prison couldn't get any worse, episode 9 turned the last century upside down

National history not on side of Blackmore and Minella Times