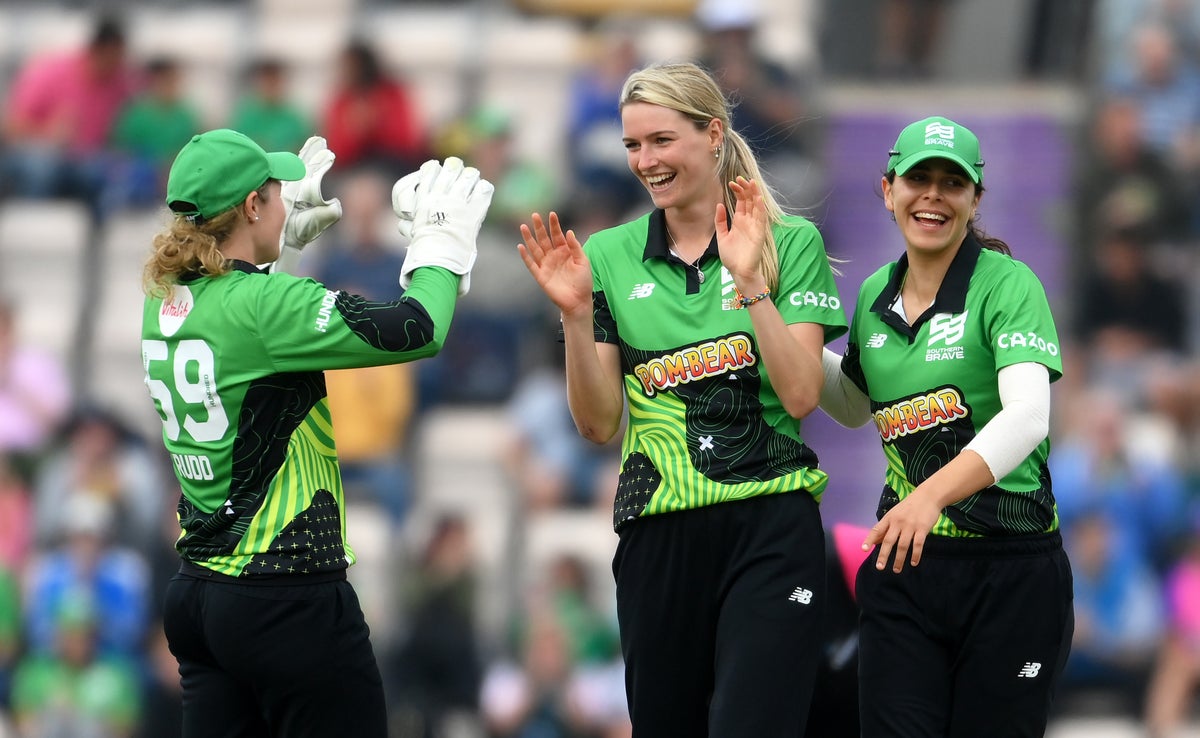 Lauren Bell posted her best numbers yet in this season’s Hundred as Southern Brave rolled past Trent Rockets to secure their knockout stage spot.

Fast England bowler Bell claimed 4-10 to advance to nine wickets in the tournament, two behind teammate Amanda-Jade Wellington, who went 3-18.

Rocket’s 88-8 was never competitive and was proven when Smriti Mandhana and Danni Wyatt smashed 57 balls from 31 and 36 balls from 25 respectively to beat the modest 56 ball total and win by 10 wickets.

Brave maintains their perfect record and will go straight to the finals if they beat Northern Superchargers or if Oval Invincibles and Birmingham Phoenix slip in their last two games. Rockets need one of Invincibles and Phoenix to lose their two remaining games to advance.

Rockets were used and apart from an exciting cameo from Marie Kelly she struggled massively with the conditions, be it Bell’s momentum or Wellington’s spin.

Bryony Smith became the first woman to be dismissed in the first five-ball set of an innings in this year’s edition when she missed a short Bell delivery on Wyatt at Deep Midwicket.

The only time the Rockets were on top was when Kelly hit Anya Shrubsole through the ceiling and then was tipped over the limit for a six by a full-stretch Wyatt.

Kelly slowed and tried to chip across the in-field only to give Bell her second wicket by finding cover and Elyse Villani looked set for 25 before slicing Wellington into extra cover.

Rockets scored just a single boundary in the second half of their innings, a six from Mignon du Preez when Brave turned the screw in time as the drizzle eased.

The need to catch up runs meant five wickets fell in the last 21 balls, with only nine runs coming. They only managed eight borders total to underscore their lowest border percentage in the tournament.

Nat Sciver was put out of her misery after a hellish 19-of-30 ball when she was dropped by Wellington, who also found rival Australian leg spinner Alana King slipped while backing up before Du Preez was caught sweeping Georgia Adams.

Bell finished things off with exemplary last five balls, with Katherine Brunt and Sarah Glenn both making the final two deliveries of the 100.

Mandhana hit the first ball of the chase to the point limit and didn’t look back. A four-goal hat-trick by Sciver made things even easier.

Her opening partner Wyatt had some luck, an edge went off between the keeper and King but that only encouraged her and five boundaries in seven balls later and she had passed the Indian.

But Mandhana used her advantage again, hitting King over her head again and celebrating a 30-ball fifty before winning the game with another maximum.

The pair flashed 16 fours and two sixes to create a series of unflattering bowling figures.

The win with 44 balls remaining was the most wasted ball in a chase across both years of the Women’s Hundred.

"I have cared for my daughter for 40 years, but I am not entitled to a state pension - my contribution is classified as zero."

Rams vs. 49ers: What to watch in NFC championship game