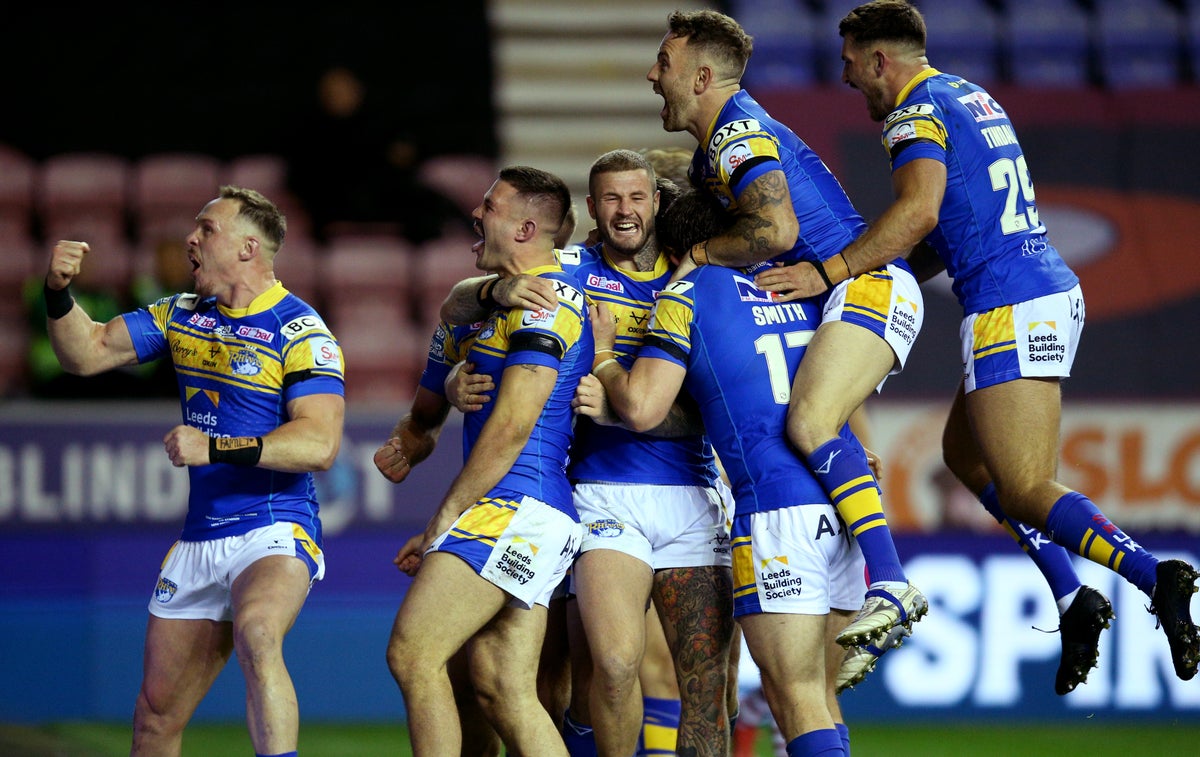 Leeds showed a remarkable display of courage and determination to condemn the 12-man Wigan to a first home defeat of the season and advance to an 11th Super League Grand Final.

The Rhinos were under pressure for almost the entire first half of the semifinals at DW Stadium, but were able to limit their opponents to a 4-2 lead at halftime before finding their attacking rhythm in the second half.

The only disappointment for Leeds was an injury to scrum half Aidan Sezer, who was brought down by a high and late tackle by Wigan’s England striker John Bateman and will miss the Grand Final after failing his head injury rating.

Bateman was shown a red card for the tackle and now has to wait anxiously to see if his untimely challenge jeopardizes his World Cup spot, with Rugby Football League’s matchmaking panel sure to look closely at the incident on Monday.

Wigan’s misery was compounded by the loss of try-scoring phenom Bevan French with a foot injury early in the second half and they were 20-4 down before hooker Sam Powell marked his 250th appearance for them with a late consolation effort.

The defeat ended disappointingly the remarkable career of Wigan captain Thomas Leuluai, who made his 327th appearance for the injured Cade Cust.

For Leeds, reaching their first Grand Final in five years must rank among their greatest achievements in the history of the competition.

They were runners-up in the Super League in April after winning just one of their first 10 games but go to Old Trafford in good spirits after enjoying a remarkable revival under Rohan Smith.

Former Leeds support Brad Singleton knocked in the first set but Wigan’s handling was otherwise flawless in the first half and their aggressive defense coupled with excellent kickplay kept Leeds in their own half for a long time.

The only try of the first half, which came after 10 minutes, was set up by loose forward Morgan Smithies as he blocked Blake Austin’s kick to gain possession midway, and in the final game of the set Harry Smith’s crisp pass found wingers Liam Marshall with just enough room to get a flying finish in the corner.

Smith was wide with the conversion and he also went wide with a penalty as the Warriors failed to factor the weight of possession on the scoreboard.

Former Wigan center Zak Hardaker relieved the relentless pressure with a counter-attack and although Smith came back to make the tackle, Hardaker clawed back a couple of points with a penalty goal after Austin was tackled high by Jai Field.

Field was a constant threat with his pace and elusive run, but French was practically a passenger on the wing as he struggled to overcome a foot problem he suffered in the early stages.

Leeds, fueled by nearly 4,000 fans in attendance in a crowd of 12,777, rarely got out of their own half but defended heroically to limit their opponents to a single try before half-time.

And their patience and perseverance paid off four minutes into the second half when O’Connor, who preferred skipper Kruise Leeming as the Rhinos’ starting hooker, pushed over from the dummy half for the try that put them ahead.

Hardaker added the conversion and things got even better for the visitors three minutes later as Bentley won the race after Sezer’s cultivator kick to score their second try, with Hardaker’s third goal leading to the 14-4.

Wigan’s task became virtually impossible when Bateman saw a red card after 50 minutes for his tackle against Sezer, who was no longer involved in the game.

Bateman was the first to call for medical attention for his opponent and apologized before leaving the field, but his exit left a huge hole in Wigan’s defense which Leeds took advantage of in the 65th minute to allow Bentley to score their second try.

Marshall was denied a second try by the video referee and Powell was held over the line before finally squeezing through from the dummy half to the final score.

Housing crisis – you got the course, how do you find the room you need for your studies now?

The Royal Coin: With Elizabeth gone, fortune will favor "the Firm" as long as they take care of the brand

Will FA Cup matches have a replay or extra time and use of penalties if the draw is in the third round? – Irish Sun