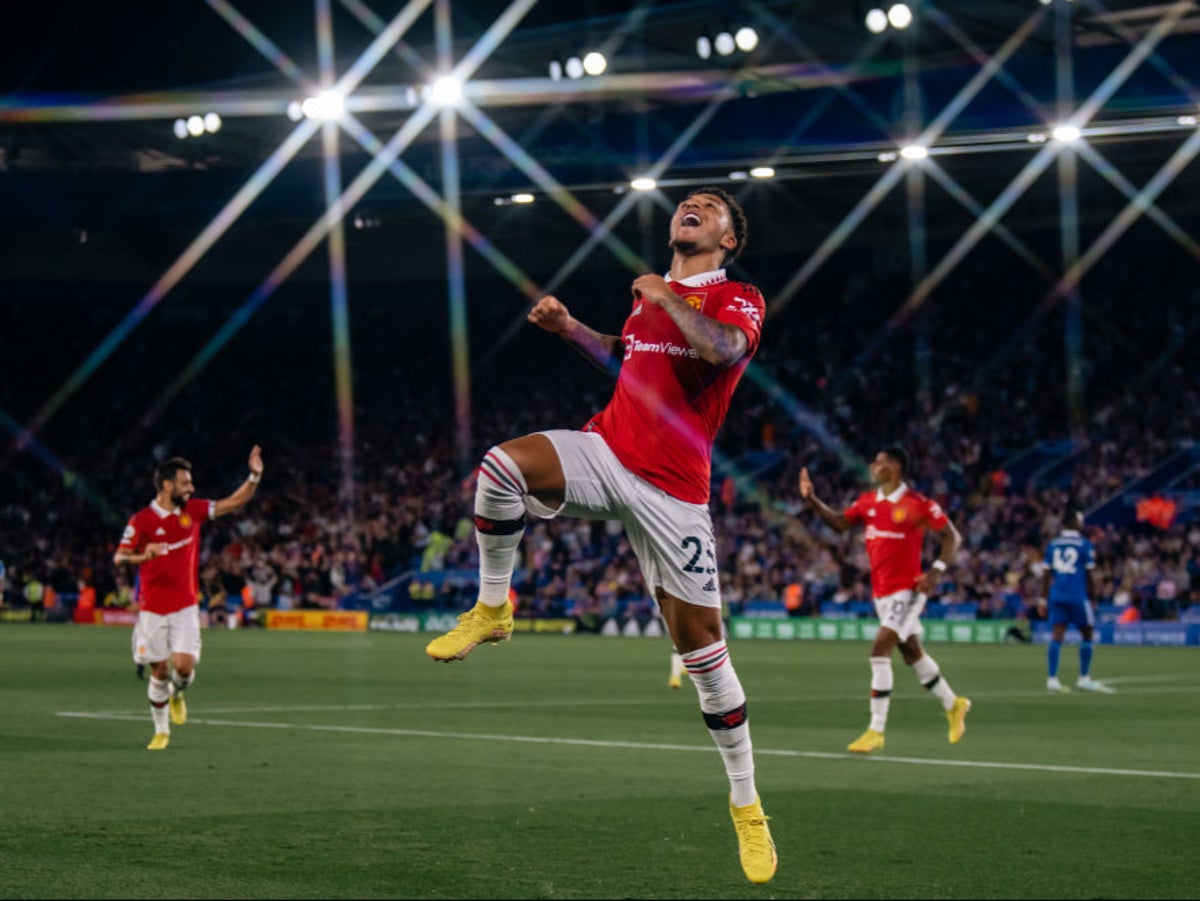 As the building blocks of one leadership position are carefully laid down, those of another may begin to fall apart. Manchester United are fifth after that 1-0 win over bottom-placed Leicester City – a level that was hard to imagine earlier last week – thanks to a superb first-half goal from Jadon Sancho. Brendan Rodgers’ only consolation will be that his opponents were in a similar position that night until recently.

It’s hard to resist the feeling that while one of these clubs is at the beginning of its journey, the other is in danger of reaching an end. Rodgers has not lost four straight Premier League games since his time at Swansea City. Expectations weren’t great then and even if he can point to a lack of investment in the summer market, results are badly needed as the last-minute £15million acquisition of Wout Faes was the only significant arrival.

Perhaps most worrying for Leicester was that United didn’t have to be particularly good to take all three points, or even rely on the players who rushed in after losing their opening games of the campaign. Erik ten Hag’s third straight win was mostly comfortable, even Leicester’s brief attempts at a second-half surge being dealt with and contained. All three wins have come from a single goal. There is work to be done. But the trajectory is unmistakably upwards.

While Rodgers welcomed returnees James Maddison and Wilfried Ndidi, Ten Hag named the same line-up for the third straight game, with still no starting place for Cristiano Ronaldo or Harry Maguire and still without a full debut for new signing Casemiro. The chances of €100m new signing Antony taking on Arsenal directly on Sunday seem slim on that basis. But after finally finding a setup that isn’t broken, the United manager is in no mood to fix it.

You can see why. What followed was the most authoritative half of football to date under Ten Hag. That might not be saying much and might still be some way from his ideal vision of pressing, possession and playing from behind, but the impact of his coaching is starting to show. Every department is looking better than that bloodletting at Brentford last month, be it organization at the back, balance in the middle or liaison play up front.

There was no finer example of this than the goal. Diogo Dalot launched a counterattack straight after a long kick from Leicester goalkeeper Danny Ward and played Bruno Fernandes in space on the right touchline. Fernandes selected an unmarked Marcus Rashford inside, whose deft pass slipped behind Sancho one-for-one. He stroked the ball with his right foot, rounded the oncoming Ward and rolled the ball into an empty net.

While Leicester’s loose positioning had practically prompted United to come forward, it was a skillful goal. United had also grown in the other direction, with Raphael Varane impressively setting up his defensive line. With possession briefly catching Lisandro Martinez and Leicester pulling away, Varane’s interception prevented a dangerous through ball that caught Jamie Vardy. Potshots from distance were all Leicester could muster before the break.

An answer was to be expected. Whatever King Power’s problems, they are a better side than their first-half performance suggested and David de Gea was tested for the first time by a Maddison free-kick that had to be clawed out of the top right corner . In keeping with Ten Hag’s post-Brentford changes, the United goalkeeper had been kicking long for most of the night but that approach helped control slowly being relinquished. Casemiro was introduced just before the hour to try to push it back.

Gradually they did. At times they even seemed to enjoy defending a lead. Dalot’s reaction to a goal kick won – he roared and then hugged Martinez – was a testament to the fighting spirit Ten Hag has consistently demanded and is beginning to deliver. Even Ronaldo was busy with his cameo off the bench, hitting Rashford wide with a late, angled shot. This victory was the work of a team making slow, steady progress. Rodgers, meanwhile, will fear Leicester are only going backwards.