We already know quite a bit about Xenoblade Chronicles 3 – we’ve met some of the characters and played through many of the game’s fights in the upcoming RPG. Today Nintendo introduced us to two of the game’s areas – and one has a particularly well-known opponent for Xenoblade fans to challenge.

These two new areas cross a few JRPG boxes and a few Xenoblade boxes, but what always sets these locations apart is the variety of fauna, flora, and the sheer scope and detail of each location. Don’t forget, we may have seen snippets of these locations before, but this is the first time either location has been mentioned – so first, get a little refresher from a few weeks ago:

All caught up? If you’re a fan of the series, you might notice a few connections between these two new locations and previous games – so if that’s something you’re worried about, now might be a good time to step back! Executive Director Tetsuya Takahashi has previously confirmed that Xenoblade Chronicles 3 “is an all-new adventure that brings together the worlds of Xenoblade Chronicles and Xenoblade Chronicles 2 to transport players to the future.” But the more we see of the game’s locations, the more real feel this statement.

So let’s take a look at what the world of Xenoblade Chronicles 3 has to offer! We’ve pulled everything from the official Nintendo UK Twitter to put it in one convenient place for you: 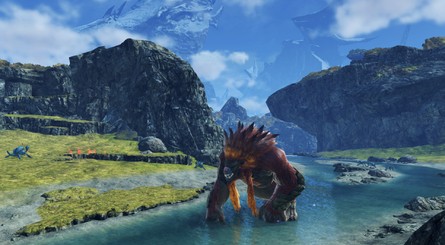 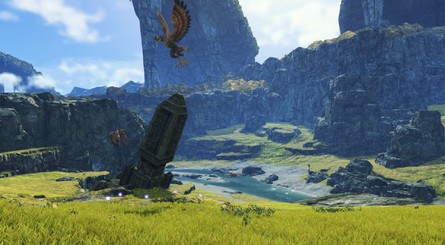 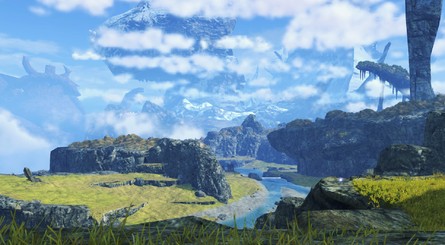 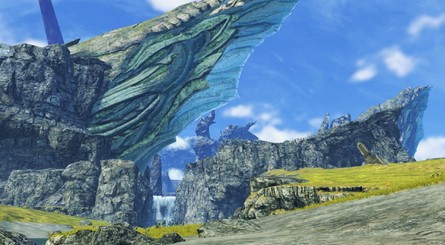 A river flows through the vast grasslands of Xenoblade Chronicles 3’s Millick Meadows. The lush nature on display here certainly looks inviting, but beware — the creatures (and even plants) that live here don’t take well to passers-by.

The Millick Meadows looks totally lovely, like a typical early Xenoblade area, and that’s no bad thing! It reminds us of Gaur Plains from the first game and Gormott from Xenoblade Chronicles 2 with its sprawling, lush fields of the kinds of monsters that roam. The rushing water and wide blue sky just bring us back. On some of the screens you can see the two giant Ancients (of the box art) in the background, and what looks a lot like one of Gaur Plains’ giant arches can be seen in a couple of shots.

Oh, and look who that is in the top left! The territorial Redbeard has been a mainstay since Xenoblade Chronicles – it’s a unique monster that’s usually around level 80 (with other variants at higher levels), and it’s kind of a rite of passage to run to this severely underleveled just to to be destroyed. We promise. 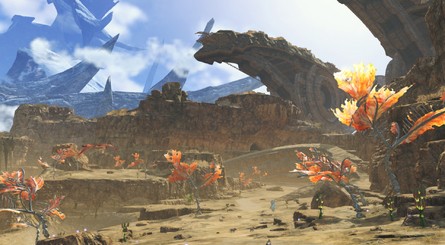 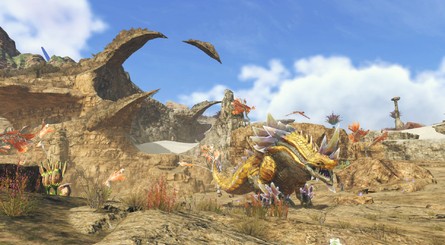 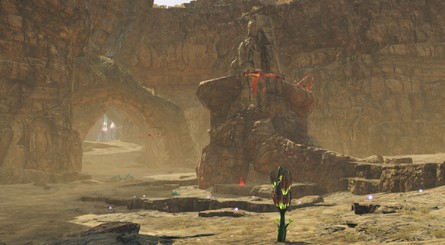 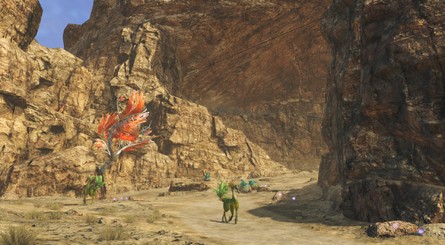 If you like sand in your shoes, then pay a visit to Xenoblade Chronicles 3’s Eagus Wilderness. You can spot a well-known landmark while dodging the sandstorms of this desert. Is that a… giant mechanical finger?

Eagus Wilderness is decidedly less comforting (if you can call a space that has a giant ape-like creature roaming about in it). If anything, this place looks a little like Oblivia in Xenoblade Chronicles X. The plants have all dried up here, and some monsters are growing rocks and crystals out of their backs. But Nintendo UK points to a mechanical finger – which you can see in the image above left. But what is it doing there?

It’s probably the finger of the mechanic from the first game. Now we won’t go into detail as this is a late game location in Xenoblade Chronicles (and we know some of you are trying to catch up before July), but there are some clues in some screenshots that point to what used to be was this place.

We’re almost two months away from the July 29th launch of Xenoblade Chronicles 3. This feels far away but it will catch up with us soon and suddenly we will panic because we have too many video games to get through before it falls!

You can pre-order the game below, and remember that in the US you can purchase a $50 eShop card for 10% off in our store with the code NLIFE10:

Please note that some external links on this page are affiliate links, which means we get a small percentage of the sale if you click on them and make a purchase. Please read our FTC disclosure for more information.

Chat about these new locations in the comments, but watch out for spoilers for those who may not have finished 1 or 2!

Paris Jackson says her father Michael is a 'freedom, hippie guy' in a rare interview