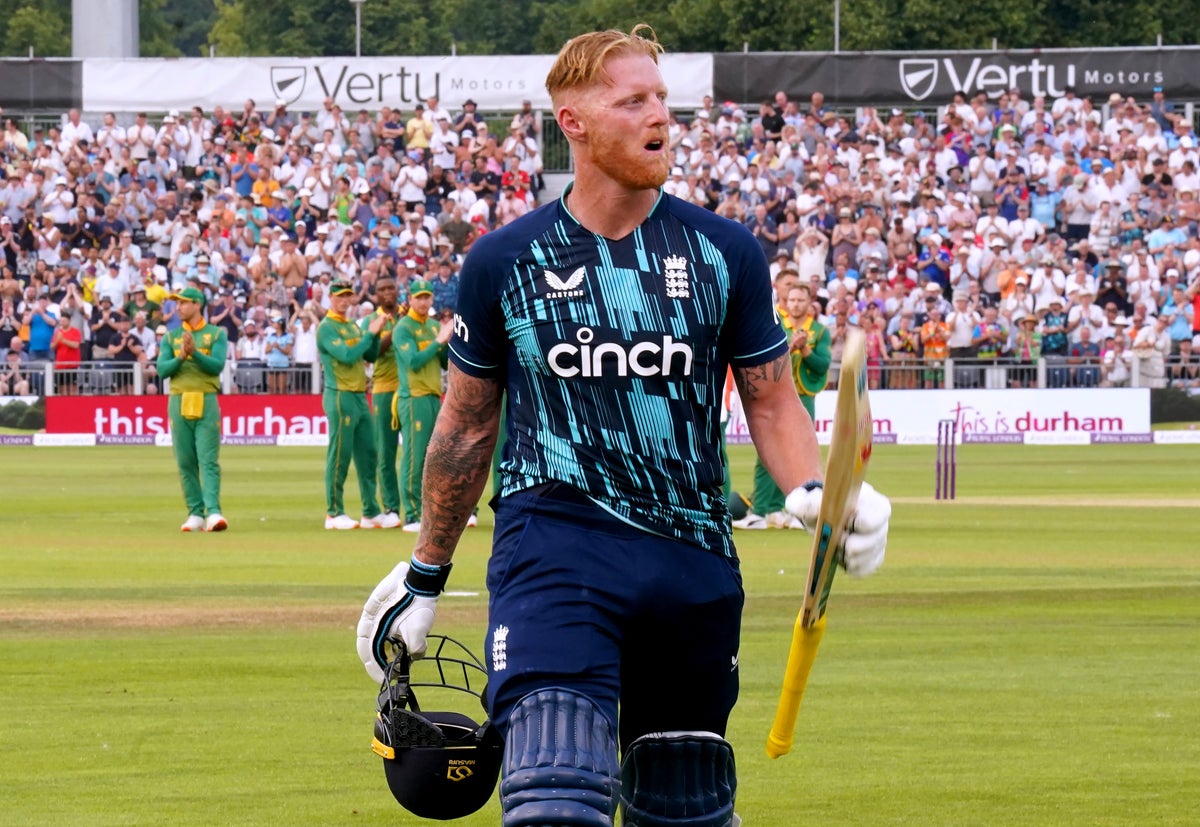 There was no fairytale end to the day-long international cricket for Ben Stokes on his home turf as he faltered at Chester-le-Street with bat and ball as South Africa started the Royal London Series with a 62-run win over England.

Stoke’s 105th and final ODI appearance was not one he will remember for his own contribution, when he bowled five stiff and wicketless overs for 44 runs before being sacked for five, but the handful of ovations he received from one to a sold-out audience was a touching reminder of the World Cup hero’s enduring legacy.

After losing four of their six games to India this month, England’s troubles with the white ball continued under new captain Jos Buttler as Rassie van der Dussen’s career-best 134 set the stage for a difficult defeat.

After begging the hosts to perform in a brutal 37-degree heat, the Proteas made 333 to five – their new record in English conditions – as Van der Dussen shared the century spots with Janneman Malan (57) and Aiden Markram (77). ) shared.

England were set at 271 in response, with Joe Root’s 86 being an elegant but ultimately inconsequential footnote.

England were lethargic in the oppressive conditions, with debutant Matthew Potts managing just four overs with the new ball before succumbing to the Heat and spending the rest of the innings recovering.

Much was expected of returning leg spinner Adil Rashid, who returned to Mecca after completing the Hajj pilgrimage, but he was kept quiet as South Africa milked their 10 overs for 63.

The tourists fought purposefully throughout, never going all out, but certainly racking up a hefty score. Van der Dussen set the tone with his anchor tap, scoring just 40 of his runs within limits and dodging between the stumps for the remaining 93.

He was as appreciative of the increased breaks in play as he was of England’s weary bowling attack, with ice packs, sodden towels and parasols coming and going to keep players cool.

Pott’s absence left England with overs to find and while Stokes would have loved to be promoted, he grimaced with two awkward spells that only underscored the reasons for his early exit.

Instead, it was Liam Livingstone’s mix-and-match spin that accounted for the top two scorers, Van der Dussen shot clean and Markram holed within three deliveries. Sam Curran, Moeen Ali and Brydon Carse each took one.

England have chased totals of more than 334 five times but some of the results since Eoin Morgan handed the reins to Buttler this month made it look like a sizeable task.

Opening players Jason Roy and Jonny Bairstow are hard to intimidate, and they peeled away from 102 to get the chase going – a record high dating back to the 14th century. But despite an early six from Roy, one more than South Africa managed in their innings, they never really dominated bowling in the way they would like to.

South Africa’s plans were thwarted when Andile Phehlukwayo accidentally went down in a collision with captain Keshav Maharaj. But while England struggled with Potts’ absence, South Africa were able to call in Dwaine Pretorius as a concussion replacement.

England needed one of the top two to make it big. Both were interrupted, Roy getting ahead of Maharaj for an unmet 43 and Bairstow lbw for 63 which Markram swept.

That brought Stokes to a rousing reception for his final ODI stand, to be repeated 11 balls later as he made the return journey to the Pavilion.

He collected just five before a reverse went awry, pinning him clean in front of the stumps. He briefly considered calling DRS in a last ditch effort to extend his stay, but then changed his mind and left the stage in resignation.

Root set out to put together a beautiful cameo filled with dozens of classic punches, two big punches for six, and his new favorite reverse ramp via third man. But the rest of the middle order crashed and burned.

Buttler and Moeen Ali were both wiped out by Tabraiz Shamsi’s spin, Livingstone pulled Lungi Ngidi into his stumps and with 119 needed from the last 10 overs it was already game over. Anrich Nortje wrapped things up by taking the last four wickets, castled Root and then sawing the tail.

https://www.independent.co.uk/sport/cricket/ben-stokes-england-south-africa-odi-b2126936.html No fairytale ending for Ben Stokes as South Africa beat England in the series opener

Battlefield games in order: By release date and schedule