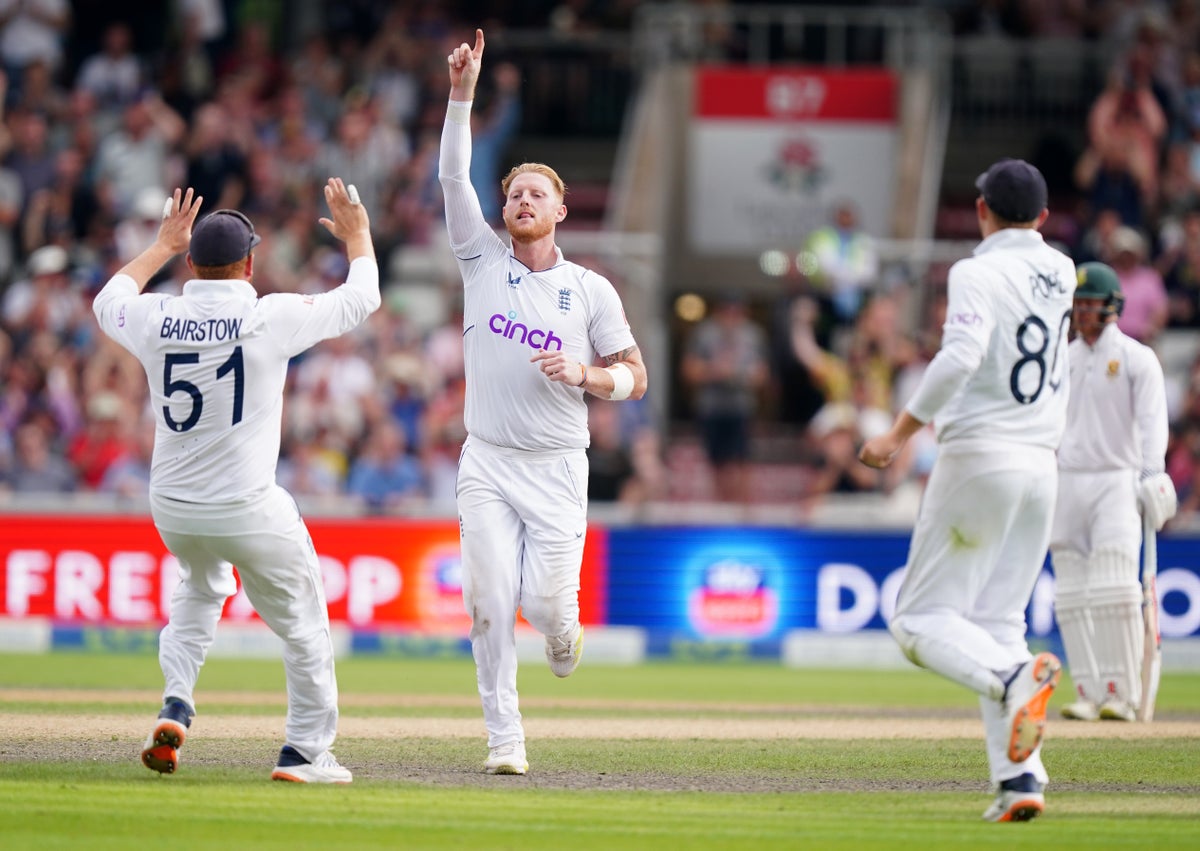 Ben Stokes scored the crucial brace to put England on course to a three-day win over South Africa at Emirates Old Trafford.

England trumped home in the second LV= Test with one innings and 85 runs – an even bigger lead than they lost in similarly devastating fashion at Lord’s last week – as they flattened the tourists for 179.

And it was Captain Stokes who once again demonstrated his inspiring all-round qualities, following up his fine century on day two with a long run of bloody ball-in-hand brilliance.

Fourth wicket pair Keegan Petersen and Rassie van der Dussen had successfully sucked the heat out of England after a strong start from the hosts and blocked their path in a determined 87 in 261 ball run.

With inspiration scarce, it fell to Stokes to break their will as he removed the pair in back-to-back overs early in the evening session.

His defining moment came in the middle of a grueling 14-over stint on either side of the tea break as he lashed out for the cause and played trumps.

After doing his job, he threw the new ball to James Anderson and Ollie Robinson, who finished things off with a glow of glory by winning the last five wickets for just seven carries in the 30-delivery span.

Anderson added another fast bowling record to his collection with a nip-backer that sailed through Simon Harmer’s goal before rattling into off-stump. It was his 950th wicket in the three forms of international cricket and put him ahead of Australia great Glenn McGrath to the top of the all-time non-spinner list. Only Muttiah Muralitharan (1,347) of Sri Lanka, Shane Warne (1,001) of Australia and Anil Kumble (956) of India are ahead of Anderson, who soon had his 951st casualty and 100th against South Africa when he edged Kagiso Rabadas Thugs in England’s attack found an overwhelming victory.

Much attention was placed on Robinson at his first Test in seven months after suffering various injuries and ailments and scrutinizing his overall fitness – which was publicly questioned during last winter’s Ashes. But there was no sign of a dip in intensity and he was the bowlers’ pick on Saturday with four wickets. Tougher challenges could lie ahead, but this was an encouraging return for a bowler with a spectacular 20.93 average after 10 Tests.

View from the dressing room

England will be waving the flags after such a comprehensive win but they will have two weeks to wait for the series finale. South Africa, without Van der Dussen due to a broken left index finger, need to regroup quickly.

https://www.independent.co.uk/sport/cricket/ben-stokes-james-anderson-record-ollie-robinson-england-cricket-b2154239.html Record for Anderson and redemption for Robinson as Stokes inspire England to win

Raising lockdown babies was 'lonely' but it helped build a 'strong bond' with infants, study found