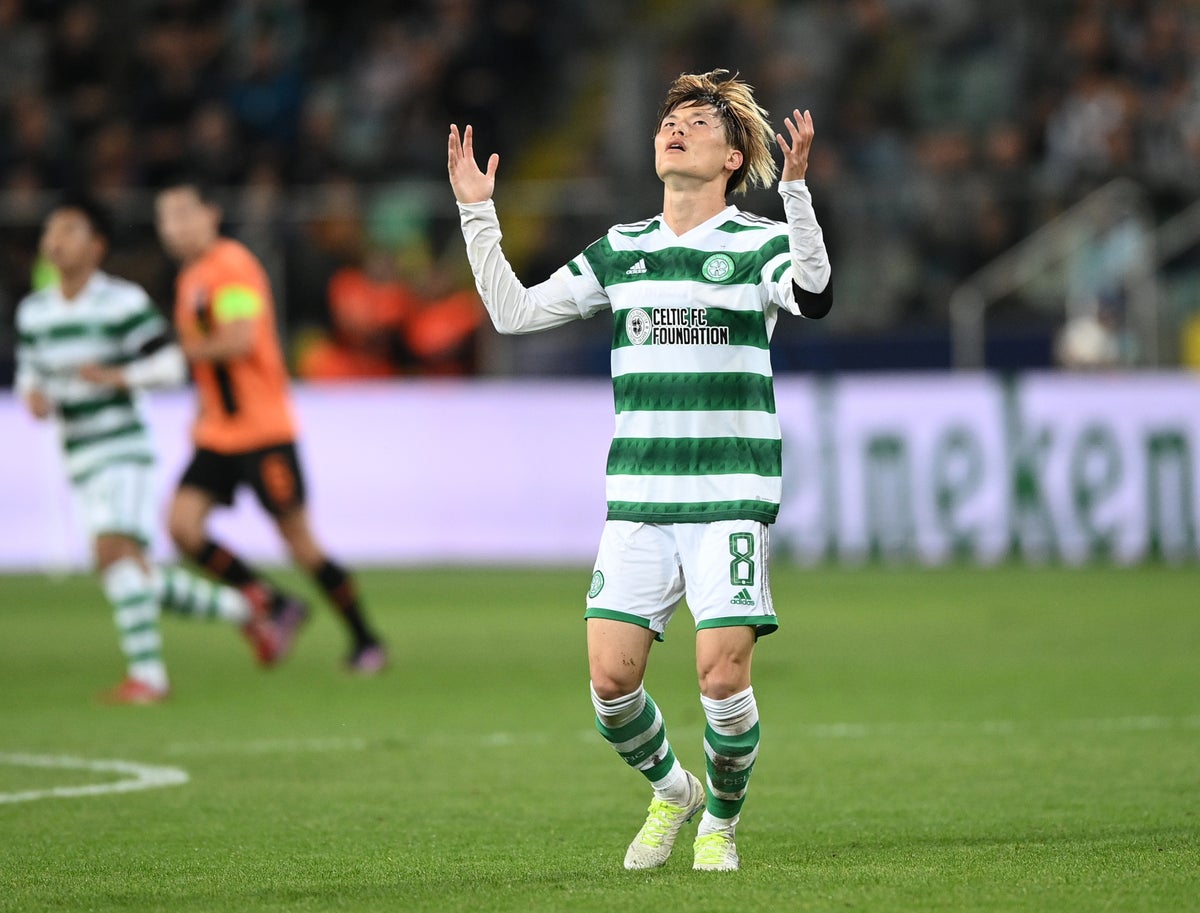 Celtic were unable to build on a dominant start to their Champions League game against Shakhtar Donetsk as they suffered a frustrating 1-1 draw in Poland.

Reo Hatate’s run past home defense gave Celtic an early lead, but Mykhaylo Mudryk equalized against the run of play in the 29th minute.

Ange Postecoglou’s men endured a little more pressure before proving their superiority after the break.

Substitute Giorgos Giakoumakis, however, missed the best of a number of opportunities for Celtic to claim their first European win of the season.

After Celtic also missed chances in the opening defeat against Real Madrid, there is now another game against RB Leipzig.

The Ukraine side, evicted from their home stadium since 2014, drew a nearly sold-out crowd at Legia Warsaw stadium of nearly 30,000 spectators, but the biggest noise came from away fans.

After talks between the two clubs and Uefa, there was no minute’s silence for the Queen, but both pairs of players wore black armbands.

Off the pitch, some of the visiting supporters voiced their anti-monarchy views. One banner at the Celtic end read: “F*** the Crown” while another read: “Sorry for your loss Michael Fagan”, a reference to the intruder who broke into the bedroom of Queen’s Buckingham Palace in 1982.

‘If you hate the royal family, clap your hands’ was chanted at the start of the game but Celtic fans were quickly put on the positive game.

Matt O’Riley came on for Kyogo Furuhashi in the first minute but Shakhtar goalkeeper Anatoliy Trubin got a foot inside the striker’s shot to deflect it wide.

Greg Taylor’s cross was deflected too far in front of the Japanese striker and Matt O’Riley saved a try before Celtic took the lead in the 10th minute.

A diagonal ball from Josip Juranovic landed at Sead Haksabanovic, who started for the club for the first time. The winger reinforced Hatate’s forward drive and the midfielder’s shot was deflected off Artem Bondarenko and went into goal. Furuhashi could have scored but, perhaps aware of a possible offside decision, decided not to, only for it to be counted as an own goal.

Celtic continued to cause Shakhtar numerous problems with their passing and movement, but the Ukraine side equalized out of the blue.

A pass into ex-Legia right-back Juranovic gave left winger Mudryk a clear run to goal and he fired high into the net.

The goal gave Donetsk a big boost and former Celtic winger Marian Shved soon had the ball in the net. Shved, who made just three appearances for the hoops, had his dream goal ruled out by an offside flag against assist Mudryk.

Joe Hart then parried Shved’s curling effort before Celtic got a chance to regroup at half-time.

They started well again and Jota’s curling effort was spilled seconds into the restart but Shakhtar sealed the danger.

The Portuguese winger came close to scoring memorable goals twice, but shots were blocked at the end of impressive, labyrinthine runs.

O’Riley threatened on several occasions and his backup, David Turnbull, shot not far over from 25 yards.

Maeda also had a good late chance, but the Japanese attacker shot wide when he caught Juranovic’s driven cross.

Giakoumakis then punched the keeper in for a cross but his header didn’t have enough power to get past a retreating Shakhtar defender that prevented him from going over the line.