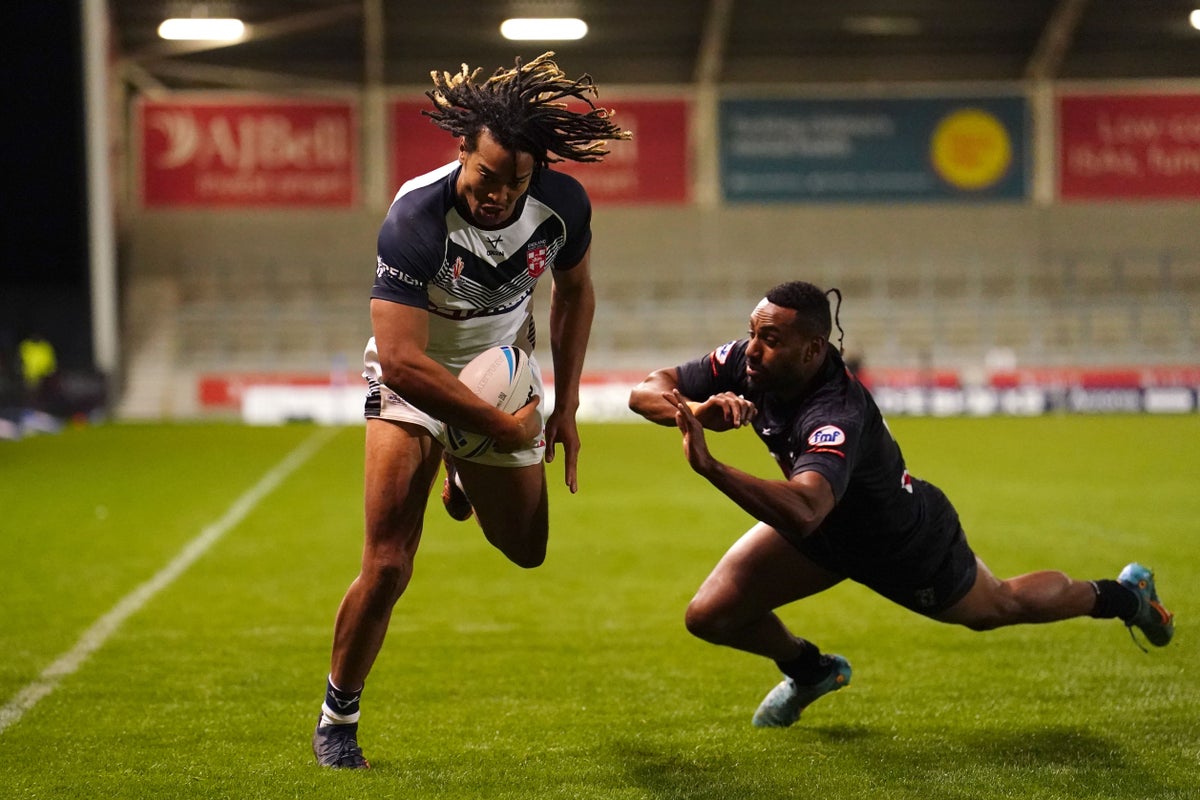 England manager Shaun Wane has singled out Dom Young after watching his side flex their muscles in the 50-0 win over Fiji in Salford.

The 22-year-old Newcastle Knights winger scored one of England’s nine tries and put on more before half-time for center Kallum Watkins and captain George Williams to campaign for participation in the tournament opener against Samoa at St James’ Park on Saturday.

While right winger Tom Makinson is set to take on Samoa for the warm-up game after a break, Young is believed to be vying with veteran Ryan Hall for the left wing spot and Wane says he is sane and admits the former Huddersfield player did this “a good chance”.

“I liked Dom,” Wane said. “He carried the ball strongly and his skill was good. Overall it was a great first game for him.

“He’s done some outstanding things with Newcastle this year but what impressed me the most was his mileage – that worried Fiji.

“He was great in camp too, he fitted in well, I was impressed with him.

“It definitely makes my selection more difficult. It’s going to be a good week this week, looking forward to it.

“All three are great wingers, that’s my job (picking two), I have to win this game next Saturday.

Williams was also impressed by the young newcomer: “He’s a natural wonder, big, strong and fast. He set me up for a try, so I owe him one.”

England led 28-8 at the break and although they lost some cohesion after Wane emptied the rest of his bench, the manager was happy with the performance and said the side emerged injury-free.

“It was very impressive with the conditions and the players who didn’t know each other that well,” he said. “Some skills that we showed were really impressive.

“Our defense was good. They’re a strong physical team, although I know they were missing some, but we’re very patient with the ball.”

Fiji, who had former Leeds manager Brian McDermott in their coaching box, have been semi-finalists in each of the last four tournaments but need to improve drastically if they are to trouble Australia in their opening game next Saturday.

They rarely looked capable of breaching England’s watertight defense and their plight was compounded by injuries to Brandon Wakeham, Joseph Ratuvakacereivalu and Kylen Miller.

“There’s not much to take from that,” admitted McDermott, who said he’d been asked by Fiji coach Dave Furner to fill in in his absence to provide valuable experience for the backroom team.

“England was very good. We gave them a few chances but they took them really well. You are in good shape.

“I’ll watch it again to see if there are any positives, but they hurt. It was a really disappointing performance and they know it.

“If we can be that ugly, let’s work on it. It’s important that we stick together. In my short time with the players, it’s a very tight-knit group and they’re loyal to each other.

“I jumped in without much notice but in a couple of days I realized it’s a fantastic group working incredibly hard and I’m looking forward to the next few weeks.”

A French degree, a nightclub and Valentine's Day - The story behind a picture book house in Dublin 3

Bob Goalby, Masters Champion Thanks to a Gaffe, Dies at 92