THE Duke of Sussex has boarded a flight to London following the death of his grandmother the Queen.

Prince Harry was seen leaving Balmoral around 8.15am after spending the night with his family.

The convoy passed flowers laid in tribute to his late grandmother.

Half an hour later, the Duke was seen boarding a British Airways flight in a black suit and carrying a shoulder bag as he walked towards the steps of the plane. 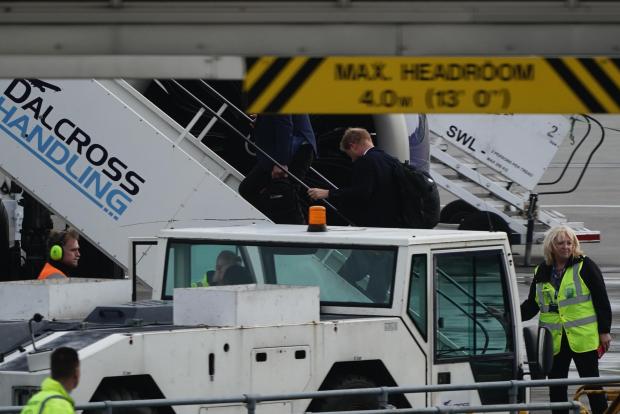 The Duke of Sussex boards a plane at Aberdeen Airport as he travels to London following the death of Queen Elizabeth II on Thursday. Credit: PA

He was accompanied by a woman wearing a safety vest, who he spoke to, and on one occasion was seen putting his hand on her shoulder.

The King is expected to later depart for Aberdeen Airport to fly back to London.

He will address the nation in his first televised address as king tonight at 6pm.

Last night, following news of his mother’s death, he released a statement expressing his sadness at the time of mourning.

Following the announcement, His Majesty the King said: “The death of my beloved mother, Her Majesty the Queen, is a moment of immense sadness for me and all members of my family.

“We deeply mourn the passing of a cherished sovereign and a beloved mother.

“I know her loss will be felt deeply across the country, in the rich and in the Commonwealth, and by countless people around the world.

“During this time of sorrow and change, my family and I are comforted and strengthened by our knowledge of the respect and deep affection that was so widespread for the Queen.”

https://www.theargus.co.uk/news/21250996.duke-sussex-boards-flight-following-death-queen/?ref=rss The Duke of Sussex flees after the death of the Queen

Death of the Queen: pub sells pints for 6p in honor of Elizabeth II

Heartbreaking scenes at the funeral of tragic siblings Christy, Chelsea and Lisa in Tallaght Dublin - 'Back with our Daddy'