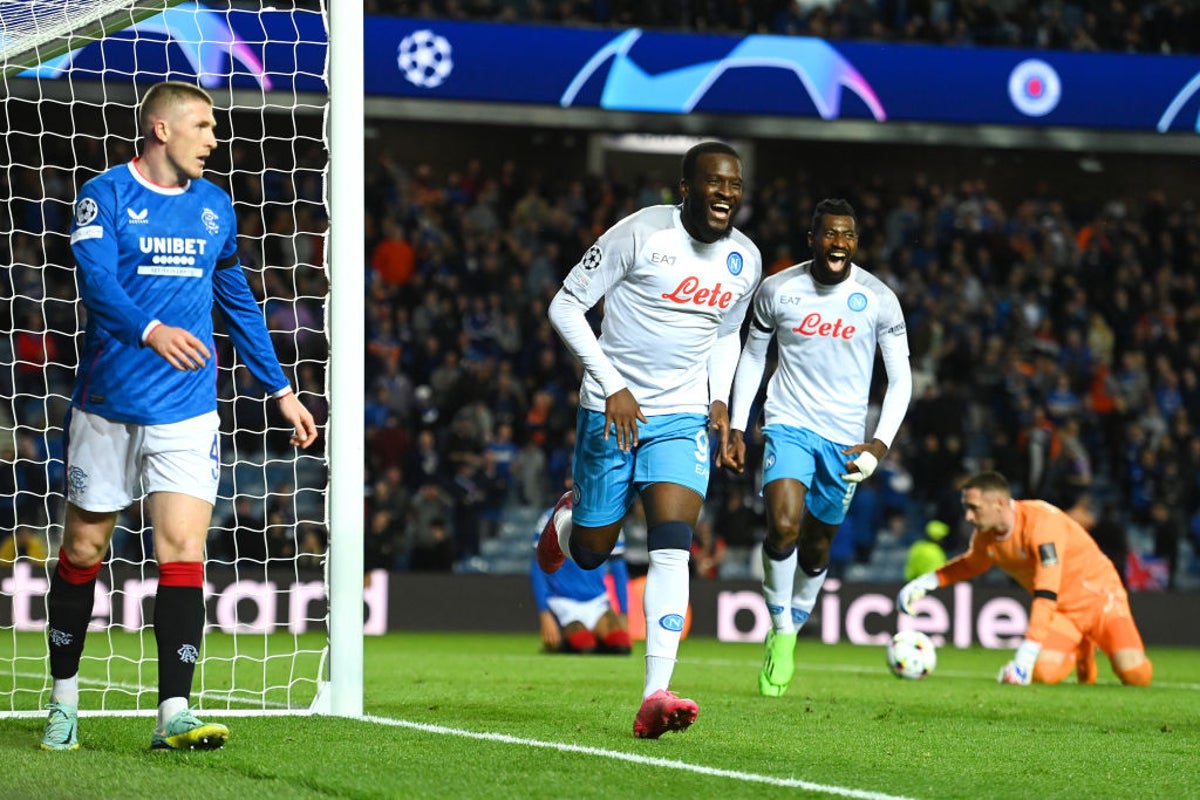 The ten-man Rangers were looking for their first Champions League point after a 3-0 defeat by Napoli in Ibrox, where penalties were the game’s turning point.

Returned goalkeeper Allan McGregor sensationally saved another Piotr Zielinksi penalty on the hour after Gers defender James Sands was sent off, before being beaten by Matteo Politano from 12 meters out in the 67th minute.

The Light Blues lost 4-0 to Ajax last week after losing by the same score to Celtic in their previous game at Parkhead.

However, they showed the desired spirit and determination against the classy Serie A leaders before falling short as they dropped to 10 men.

Boss Giovanni van Bronckhorst had vowed to stick to his footballing philosophy after two tough defeats, but he heralded the changes from Amsterdam – one was enforced when 40-year-old McGregor returned in goal for the injured Jon McLaughlin.

Colombia striker Alfredo Morelos, recently left out of the squad due to fitness issues and attitude, made his first start since March, while Ryan Jack, Steven Davis and Scott Arfield joined midfield and John Lundstram to a five-man -Defense fell behind.

Contrary to UEFA’s instructions, fans had been asked to sing the national anthem after the minute’s silence to commemorate Queen Elizabeth’s death and they belted it out.

Then followed a pulsating first half.

Morelos got close in the first minute with a short header from a James Tavernier cross.

Napoli reacted quickly and Zielinski hammered a left-footed shot from the edge of the box onto the outside of the post.

In the 12th minute, a powerful shot from Arfield from 25 yards out was blocked by Napoli goalkeeper Alex Meret for a corner that went nowhere before McGregor blocked Giovanni Simeone with his leg at the other end.

It was breathless stuff.

With no away fans present due to police problems following the Queen’s death, the home fans had the stadium to themselves and almost jumped from their seats when Morelos, who had been booked earlier by Spanish referee Antonio Mateu Lahoz for a late fight against Meret, shot in low from the edge of the box, but the keeper collected confidently.

Napoli, busy and resilient, posed a constant threat and Georgia international Khvicha Kvaratskhelia flashed just inches from the edge of the box just before half-time.

McGregor smashed an angled drive away from Kvaratskhelia just after the restart, and then Politano fired wide from 20 yards.

Then came the madness.

As Simeone shot through the goal, he was charged with Lundstram by Sands, who had been cautioned for a foul on Politano just three minutes earlier.

However, after a lengthy VAR check, the penalty had to be replayed for assault and McGregor dove right again to save Zielinski’s penalty and Ibrox broke out.

However, another Napoli penalty ensued when left-back Borna Barisic was credited with managing a shot from Kvaratskhelia, and this time Politano found the bottom corner.

It was then a difficult task for the Rangers.

McGregor saved a Zielinski shot as Napoli took full control, but five minutes from time Raspador combined with fellow substitute Mathias Olivera and rapped in a second before Ndombele struck for the third time from 14 yards in added time.