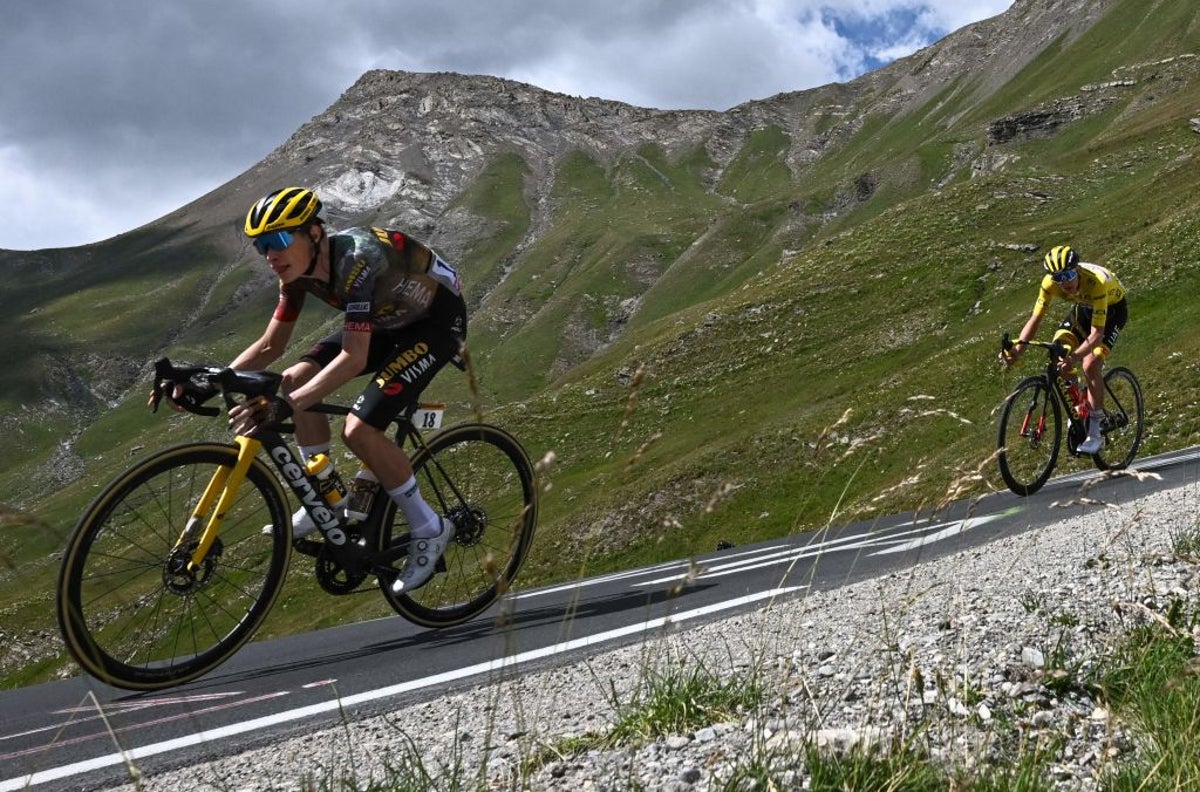 Tour de France: demonstrators block the road on the racetrack

There will certainly be more fireworks as the Tour de France resumes on Bastille Day and the race reaches the iconic climb of Alpe d’Huez on Wednesday after a thrilling battle in the mountains.

In an exceptional day of tactics and excitement, Jonas Vingegaard stormed to the front of the race and took the yellow jersey when defending champion Tadej Pogacar cracked the final climb of the Col du Granon. It came after Vingegaard and Team Jumbo-Visma isolated Pogacar and knocked him down after a series of attacks, with last year’s runners-up Vingegaard carving out a huge lead of over two minutes in the standings.

However, the riders face another major test and another grueling day of climbs on Stage 12. Before they reach Alpe d’Huez, they have to conquer the Col du Galibier for the second time in two days and then climb the breathtakingly long Col de la Croix de Fer. The home crowd will be cheering for a French winner on Bastille Day, but this race calls for no further intrigue as Pogacar looks to respond to VIngegaard’s stunning attack. Follow all the action of Stage 12 of the Tour de France:

71m left: Geraint Thomas spoke to TV reporters this morning about yesterday’s stage, Jonas Vingegaard getting the yellow jersey and if Tadej Pogacar can reply today. He said:

“We expected a crazy day [on Stage 11], and it definitely turned out that way. But happy to still be up there and in the mix.

“Yes, I think he is [Pogacar fighting back] will be safe. I think he will try to react. I can’t imagine it happening before Alpe d’Huez, but who knows at this race. I think maybe Jumbo will take a very controlled way on stage, then in Alpe d’Huez it will go crazy again. I would predict that, but you never know, you have to expect the worst and hope for the best. “Of course there are still a lot of strong guys in the running, not just these two. They’ve been the strongest so far, but as we saw at Pogacar yesterday, you never know what might happen to Vingegaard later. But at the moment he and the team seem super strong.”

73 km to go: As a breakaway, Tom Pidcock has worked his way into the virtual top 10 of the GC classification and can move forward with a lead of over seven minutes.

There are still 19 km of the Col de la Croix de Fer to climb.

Perhaps more importantly for Pidcock, he challenges Tadej Pogacar for the white jersey, awarded to the fastest young rider on the Tour.

76 km to go: A gap of over seven minutes is difficult to tame, but the peloton has the advantage of making up time on the climbs.

Most of the GC competitors will be thinking about making their moves, Jonas Vingegaard will want to time it just right to not give his rivals much time.

78m left: Jumbo-Visma leads at the front of the peloton with the help of Yellow Bib holder Jonas Vingegaard, but the gap between them and the breakaway is up to seven minutes.

Peter Sagan has fallen backwards after an earlier attack didn’t pay off.

24 km remain from the Col de la Croix de Fer. The pace has slowed significantly as riders begin to feel the difficulty of the average 5.2% gradient.

81 km to go: There is a distance of 2.5km between those at the front of the race and the chasing peloton, which includes the main GC contenders including Yellow Bib wearer Jonas Vingegaard.

83 km to go: With a large proportion of descents, 46.2 km were covered in the second hour of racing. The average daily speed so far is 38 km/h.

The peloton has reached the foot of the Col de la Croix de Fer. 29 km uphill ride to the summit.

87 km to go: Politt and Barguil are brought back by the peloton, now more than five minutes behind the nine riders in the breakaway.

At the moment they are about 600 meters above sea level and there is still some downhill riding before the next HC climb.

They are 4’45” ahead of the peloton as they make their way through Saint Michel de Maurienne.

96 km to go: Tom Pidcock and Nielsen Powless led the way down the Maurienne valley, with Pidcock taking the downhill turns at an electric pace and Powless finding it difficult to keep up.

101 km to go: Froome and Pidcock catch the leading group, which now consists of nine riders.

Warren Barguil and Nils Politt decided to take a step on the Telegraphe descent when they stormed out in front of the peloton.

Fighter jets were sighted over Brighton this afternoon