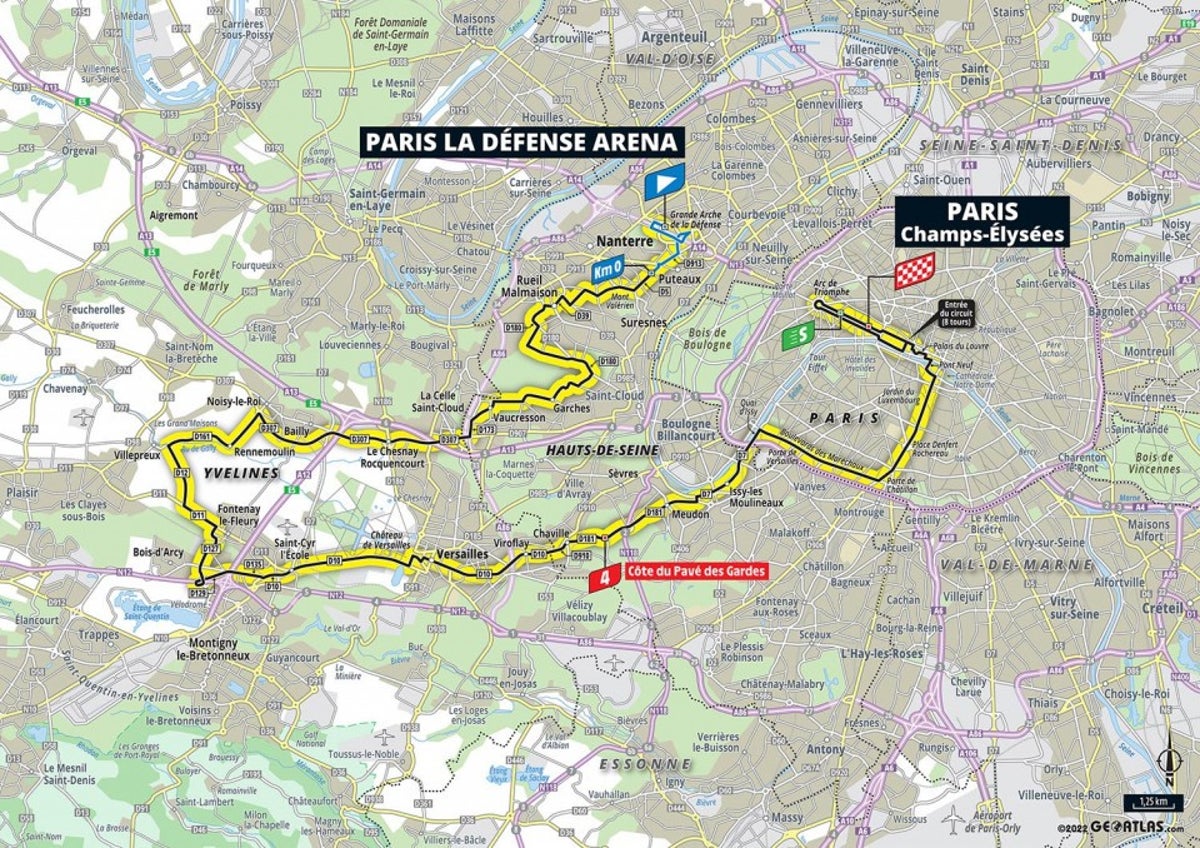 The Tour de France concludes on the streets of Paris on Stage 21, with Jonas Vingegaard securing the yellow jersey after a good performance in yesterday’s time trial and finishing second to Jumbo Visma teammate Wout van Aert at Rocamadour. While the Dane can relax today, Van Aert is hoping for more fireworks and a final stage win in the insane race down the Champs-Elysees, with other sprinters who’ve made it this far also looking to finish on a high.

Thus, Vingegaard, along with his Jumbo Visma teammates, will enjoy the procession to the French capital while enjoying a glass of champagne. But Van Aert can claim a fourth stage win today but he will have competition in the likes of Caleb Ewan (Lotto-Soudal), Fabio Jakobsen (QuickStep) and Jasper Philipsen from those who braved the Alps and Pyrenees in search of the prestigious sprinter stage (Alpecin) and Dylan Groenewegen (BikeEchange) are all in contention.

Elsewhere, Vingegaard also picks up the polka dot jersey after triumphing in the Pyrenees with a good performance in the King of the Mountains classification, but two-time defending champion Tadej Pogacar will at least have the consolation of the white jersey as the best young rider. and Geraint Thomas clinched a third career podium at the Tour de France. Follow all the live updates on the celebratory stage before the madness of the sprint finish crowns a fabulous edition of the Tour de France.

We are just moments away from neutralized launch…

Jasper Philipsen: “I think everyone got through it well, we all made it to Paris. We can turn this into a nice royal sprint.

“It has to be a sprint, we can’t do that [go for a long one]the tourist destination to celebrate the end of the tour.”

Eurosport pundit Adam Blythe: “It’s a gentlemen’s agreement, we could see it changing.

“I’m still wondering if he [Pogacar] was a second behind, could he have a little play?

“It’s more about going through it, learning to write stuff down. Every little thing makes a difference,” said Tom Pidcock.

“When I joined the team they said I should write stuff down while I was studying and here I wrote everything down every day. So I’ve got a pretty good idea for next year, a pretty good routine and all.”

OK, so attention turns to stage 21 of the men’s Tour de France.

Glory for Vingegaard, but who will win one of cycling’s most prestigious stages?

Kasia Niewiadoma on stage 1: “It was surprisingly easy, I expected it to be difficult. Nice to open your legs.

“Nothing crazy happened. I was expecting a chaotic race, fighting for positions, but it seemed relaxed, maybe because of the rather wide roads.

“The last lap was about fighting for position, to get up front, but I think there are a lot of things for GC drivers, everyone is looking forward to it. You must be aware of the other drivers.

“My team-mate had a puncture with one and a half laps to go. A little panic. It was a little preparation for Paris-Roubaix.

“I just want to stay safe during these phases. I’m glad that everyone stayed relatively awake without injuries.”

Pfeiffer Georgi on the team win: “That’s something special. The final sprint was crazy, I had to move up a bit.

“It was pretty tough. We always come with a perfect plan, but today was hectic, you have to adapt. The girls did a good job covering the moves.

“It’s 800 meters from the corner, it’s a long way, Lorena is in position so she can win.

“Today is a monumental day, she doesn’t show it because she feels the pressure. Karaoke on the bus.

“Good mood before the start, she shows no nerves. It’s a monumental day but we tried to treat it like any other bike race.”

“It was a chaotic sprint. I was completely relaxed before the start, we did everything as normal.

“Of course there were nerves against the final. It’s amazing, I’m really, really happy with it.

“The whole team deserves it. We’re ready for the next one.

“It was very close, luckily I was able to accelerate again and hold on to the finish.”

Vos on Wiebes: “She deserved to win.”

It’s Lorena Wiebes who takes it, that was a drag race on the line.

Big win for Wiebes, she went over the outside line and then caught up with Vos in a long home sprint, great.

Tears flowed while celebrating on the Champs-Élysées. Magic.