Police have issued an update after a car carrying a pile of wood overturned yesterday.

The incident happened around 2.30pm on the westbound A27 near the Patcham junction.

Sussex Police have now confirmed that the driver suffered “no injuries” in the crash.

The car is seen lying on its side while the trailer landed in front of it completely overturned. 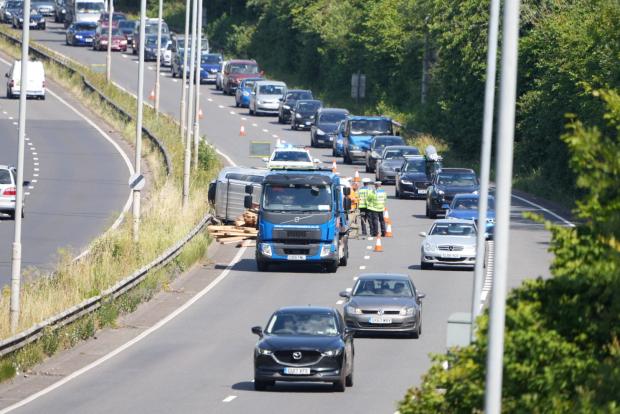 Previously, the A27 was completely closed

The A27 was initially partially closed before police closed it completely to allow for the salvage.

The queues stretched all the way back to Falmer at the Lewes Road turnoff.

A passer-by told The Argus how drivers waited in miles-long queues from their cars, some with their dogs outside in the 24-degree heat.

He said: “They had the car in the back of a tow truck when I passed but the trailer was full of wood and was still going the wrong way.

The driver suffered no injuries

“Many people had their doors open and had gotten out of their cars.

“It was so hot that people had to get their dogs out.”

A Sussex Police spokesman said: “Just after 2.30pm on Saturday 9 June, police received a report that a vehicle had overturned on the westbound A27 near Hollingbury.

“The road was temporarily closed while the vehicle was being recovered. No injuries.”

https://www.theargus.co.uk/news/20268738.update-car-towing-wood-overturns-a27-near-patcham/?ref=rss Update after a car towing timber overturns on the A27 near Patcham

Promotional footage of Brighton and Hove Albion in 1979

When we see what the neighbors are up to, we should count our lucky stars

This week’s National Highway road closures on the A27

Brexit anniversary: ​​what has changed since the UK voted to leave the EU 6 years ago today?

Trump has a role in weighing proposals to seize voting machines