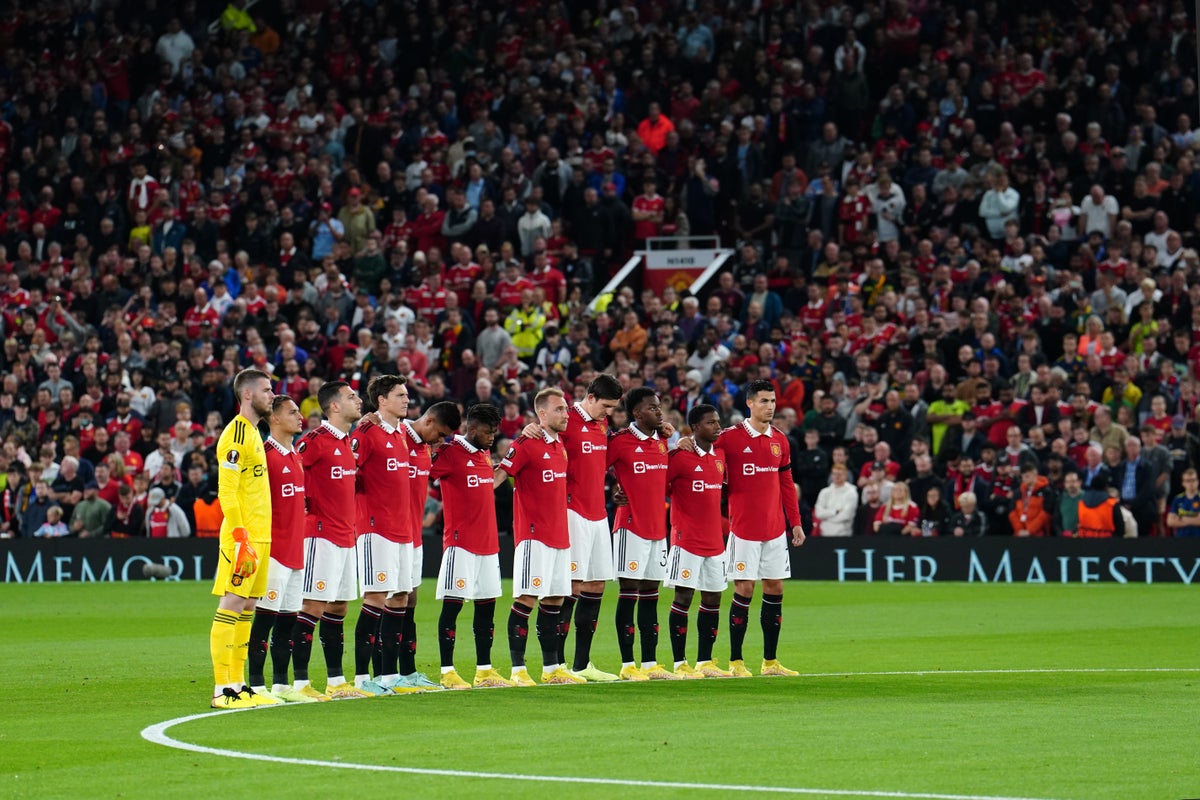 Sporting events are being canceled following the Queen’s death and more are expected to follow as a period of national mourning begins.

Decisions on further postponements in the calendar are to be made after reviewing official mourning guidelines to be issued by the Cabinet Office.

However, it is understood that the decision on how to proceed is left to the organizers of sporting events and postponements are not mandatory.

Here are the games and events affected by the news.

Manchester United v Real Sociedad in the Europa League at Old Trafford and West Ham v FCSB in the Europa Conference League at the London Stadium continued on Thursday night with pre-match honors.

The Northern Ireland Football League announced that Friday night’s games between Cliftonville and Glentoran and Larne and Dungannon have been postponed.

The English Football League also confirmed that Friday night’s Championship game between Burnley and Norwich and the League 2 game between Tranmere and Stockport have been postponed, with a decision on Saturday’s games still to be made.

The Scottish Professional Football League has announced that Friday night’s Championship game between Dundee and Cove Rangers has been cancelled.

The Premier League will hold an emergency meeting with the EFL on Friday morning to decide whether to postpone the weekend’s games.

Friday’s game between England and South Africa at The Oval and all scheduled Rachael Heyhoe Flint Trophy games are canceled.

Northampton announced the postponement of their Premiership Rugby Cup clash against Saracens which is scheduled for Thursday night.

Scottish Rugby Union has postponed all competitive domestic matches this weekend out of respect, and the women’s international summer test between Scotland and Spain on Sunday is also cancelled.

The RFL has postponed Friday’s Betfred Championship game between the Sheffield Eagles and the Dewsbury Rams, but the first elimination game of the Super League between the Catalans Dragons and Leeds will go ahead as it takes place in Perpignan, France. Further announcements on the weekend’s games at all levels should be made “as soon as possible,” the board said.

Game operations at the BMW PGA Championship have been suspended for the day and there will be no game on Friday.

Sunday’s Italian Grand Prix is ​​going ahead as planned, with a minute’s silence scheduled before practice on Friday and another expected before the race.

The race at Southwell and Chelmsford on Thursday evening was abandoned. The British Horseracing Authority also announced that meetings scheduled for Friday – including day three of the St Leger meeting in Doncaster – have also been cancelled.

The Great North Run, the world’s largest half marathon, is scheduled for Sunday. Organizers canceled its sister 5K race on Friday, with a decision on Friday’s feature pending.

Friday’s stage of the Tour of Britain was promptly canceled and later on Thursday night the remainder of the Tour, which was due to end on the Isle of Wight on Sunday, was canceled entirely.

https://www.independent.co.uk/sport/premier-league-fixtures-postponed-weekend-queen-death-b2163474.html Which sporting events will be affected after the death of the Queen?

My expatriate landlord wants me to pay rent directly to them - what are the tax implications for me?

Their Fearlessness Evokes Us, however They Confirmed Us Their Fears